Immunization, the magic wand of medicine, can make some serious diseases disappear when used appropriately and extensively. Immunization protects individual children from the pain and suffering of contagious disease.

Widespread immunization protects communities. It has, to date, eliminated smallpox and almost eradicated polio and dracunculiasis (a waterborne parasitic roundworm infection found most often in Africa that causes painful, burning blisters a year later). The Carter Center International Task Force for Disease Eradication believes that measles, mumps, rubella, lymphatic filariasis (another tropical roundworm disease) and cysticercosis (pork tapeworm) are potentially eradicable. 1 The best time to “wave the magic immunization wand” for many diseases is during childhood, when an individual’s immune system is robust and unexposed to disease. For this reason, most school systems require proof of vaccination before children start or return to school.

Despite many successes, immunization has a long way to go globally and in the United States. Optimal vaccination rates range from 85% to 95%, depending on the disease’s virulence, the vaccine’s effectiveness, and the specific population; when the proportion of immune individuals in a population reaches this level, the disease will have difficulty persisting.2 In the United States, numerous factors prevent us from reaching optimal vaccination rates in the school age population (Table).

Youngest Students, Tweens, and Teens
Children aged 4 to 6 years who enter kindergarten need several immunizations. Most of these complete a series of vaccinations that begin as early as the weeks and months after birth10:

At and after age 7, the Centers for Disease Control and Prevention (CDC) continues to recommend annual influenza immunization. Once children reach age 11, they need a booster shot for tetanus, diphtheria, and pertussis. This is delivered using Tdap, which has a reduced dose of the diphtheria and pertussis vaccines. Meningococcal conjugate vaccine is not mandatory, but strongly recommended for children aged 11 to 12 years. Children who have not been previously vaccinated for hepatitis A should also have this series of 2 shots administered 6 months apart. One of the newest available vaccines is the quadrivalent human papillomavirus vaccine (HPV4) to prevent cervical precancers/cancers and genital warts in females and the likelihood of genital warts in males. It is given as a 3-shot series in children 9 years or older.10 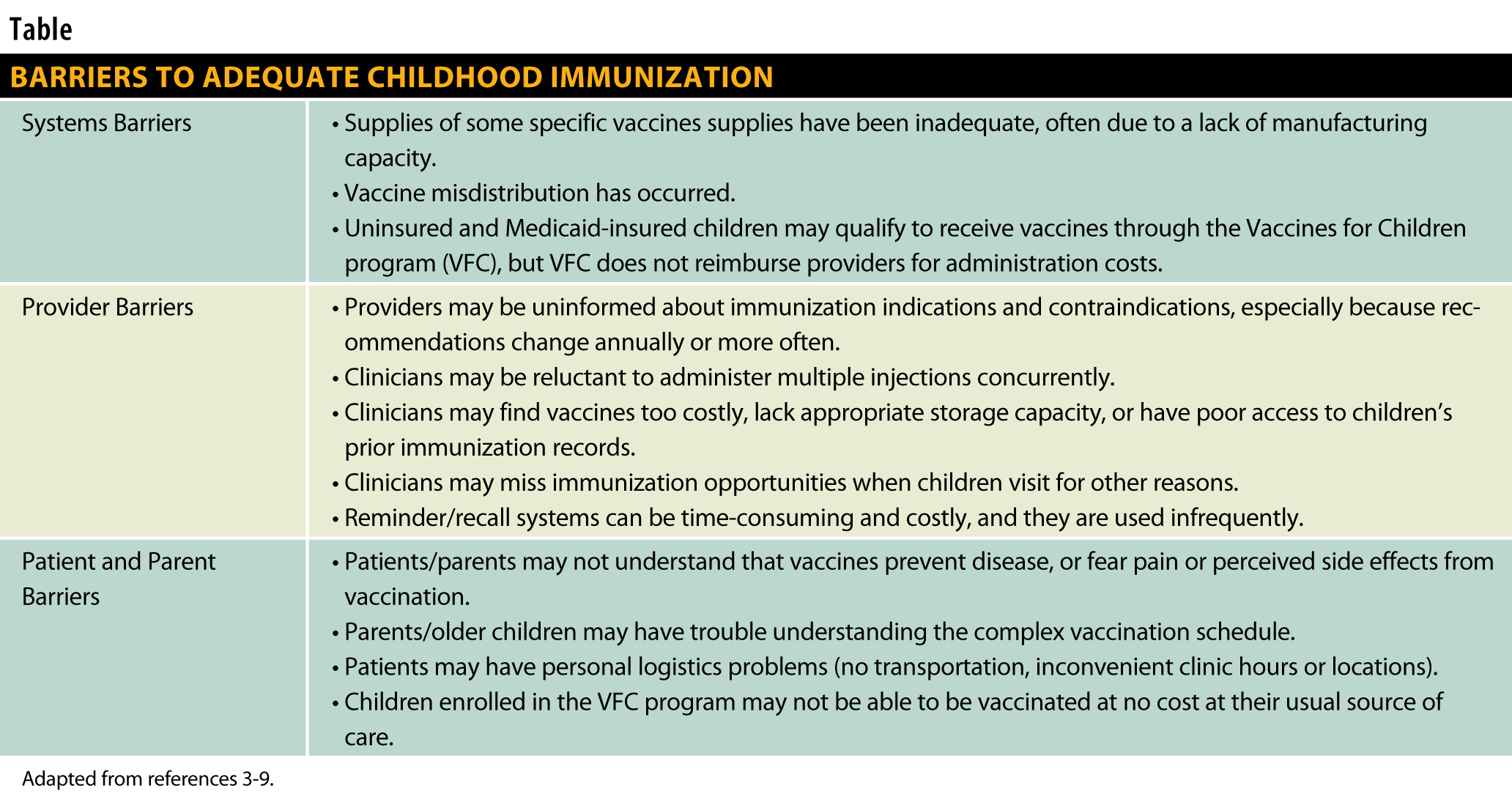 Increasing Immunization Penetration
Truly successful pediatric immunization campaigns need to reach almost all children. A decline in immunization rates has experts worried. The CDC recently found that between January 1, 2011, and May 20, 2011, 118 cases of measles had been reported in the United States. This is the highest number reported since 1996. Most cases seemed to have come from exposure abroad, where measles is epidemic; the United Nations health agency attributes the outbreak, which is especially acute in France, to a failure to vaccinate all children. 11 Recent pertussis outbreaks in the United States also concern authorities.12-15

Public policy is one way to promote immunization, but 2 other groups—parents and health care providers—also need to be engaged. Approximately 4% to 7% of parents, called “immunization refusers,” have serious enough concerns about vaccination that they withhold them from their children. The most recent basis of their concern is a now-disproven theory that vaccines cause autism. Parents who follow a line of reasoning this strident are rarely swayed by rational, science-based discussion. A larger group includes those parents who don’t understand the importance of vaccination, are overwhelmed by the complex immunization schedule, or are very busy. Pharmacists can reach these parents, especially if they remember that parents rarely choose to vaccinate children with rational forethought or at a discrete moment. It’s an ongoing decision process that they may only think about when they are reminded that immunizations are due, and health care teams need to address adherence constantly.16

When talking with parents and school age children, it’s important to stress that some immunizations prevent infections that are now rare. These infections are extremely dangerous, like meningitis or pneumonia in children of any age or whooping cough (pertussis) in very young infants, because they can be fatal. Some are so rare that clinicians may not recognize them, and treatment may be delayed.

Adults who interact with children (parents, grandparents, caregivers, teachers) also need to be sure their own immunizations are up to date. The 2 most important are Tdap (so they don’t contract pertussis and spread it to a child) and influenza vaccine. Older adults who missed vaccinations as children also need to catch up.10

Conclusion
Our current childhood immunization schedule may seem onerous to some people; children receive around 24 shots before age 2. Immunization’s benefits far outweigh the brief pinch of a shot (or even 24 shots) or a few hours of fussiness. If every child born in the United States is vaccinated according to the current childhood immunization schedule, it will prevent approximately 42,000 deaths and 20 million cases of disease.17 One of the best ways to lead is by example: Are your immunizations up-to-date?