The word vaccine is derived from the Latin word vaccinus, which means “pertaining to cows” and originates from a procedure developed by Edward Jenner in 1796, in which he scraped the scabs from cowpox lesions on a milkmaid’s hand into a cut on a young boy’s skin, which resulted in the boy’s immunity to smallpox.1-3

This discovery initiated the vaccine era, although almost a century had passed before the next vaccine, which protected against rabies, was introduced. 3 Vaccines are considered to be one of the most cost-effective preventive measures against certain diseases, and the Centers for Disease Control and Prevention (CDC) declared vaccinations to be one of the top 10 public health achievements of the 20th century– vaccinations have saved millions of lives since their introduction more than 200 years ago.3-5

A vaccine is a preparation of suspensions of killed or attenuated microorganisms, or products or derivatives of microorganisms, which are intended to produce immunity to a specific disease by stimulating the production of antibodies. 6 Annually in the United States, more than 50,000 adults and 300 children die from vaccine-preventable diseases or from their complications; however, immunizations, including those administered by pharmacists, assist in preventing an estimated 14 million cases of vaccine-preventable diseases and 33,000 cases of death.7 Vaccines are considered to be a safe, cost-effective, and efficient means of preventing illness, disability, and death from certain infectious diseases.8 One of the major objectives for the US Department of Health and Human Services Healthy People 2010, a nationwide health promotion and disease prevention program, is to improve immunization rates among individuals in the United States.9 Examples of strategies for protecting individuals from vaccine-preventable diseases include the following9,10:

- Developing new or improved vaccines and improving the use of vaccines

According to recommendations from the CDC, an estimated 73% of individuals in the United States should be vaccinated against the influenza virus annually; however, the actual rate of vaccination is 60% of individuals aged â‰¥65 years; only 10% to 40% of other groups, which include children, younger individuals with risk factors; and only 60% for health care workers.11

According to statistics from the CDC’s 2008 National Immunization Survey, the overall rates of childhood immunization in the United States remain constant at high levels.12 In addition, the CDC reports that vaccine coverage rates are increasing for preteens and teens, but nationally, rates remain low for the vaccines specifically recommended for preteens.12,13 Results from a national survey from 2007 to 2008 report, however, that coverage for the 3 recommended vaccines–which include the tetanus-diphtheria-acellular pertussis vaccine, the meningococcal conjugate vaccine, and the human papillomavirus (HPV) vaccine–for teens is increasing, but still has not met the national target goal of 90%.14

Results from the National Immunization Survey also report that vaccination rates among adults were substantially low.14,15 The survey reports that only 1.9% had been vaccinated for herpes zoster (shingles); 2.1% had received a pertussis booster; and only 10% had obtained at least the first of a 3-dose series of the HPV vaccine.14,15

Vaccine-Preventable Diseases
Annually, vaccine-preventable diseases kill more Americans than either breast cancer, HIV/AIDS, or traffic accidents.15,16 To date, the Advisory Committee on Immunization Practices (ACIP), which reviews and continually updates vaccination standards and schedules, recommends immunization in the United States for adults and children against 17 infectious diseases, which can be found in Table 1.15-17 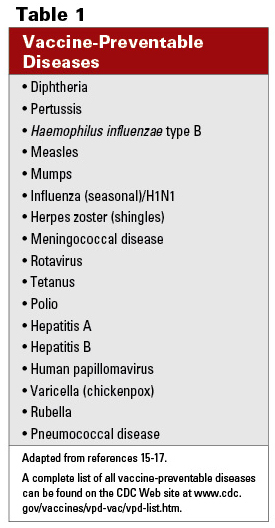 The Role of the Pharmacist and Vaccinations
The 2009 widespread outbreak of the H1N1 virus has once again sparked the great debate about vaccinations, and many patients were faced with the decision of whether to vaccinate themselves and their children. Although the decision to receive vaccines is still a patient’s choice, as one of the most accessible health care professionals, pharmacists can be instrumental in providing patients with pertinent information to make informed choices when it comes to immunizations, in terms of the benefits as well as the risks. Pharmacists are also in a unique position to identify those patients who are in target groups for certain vaccinations.17 They also may be able to ease the fears of many patients by providing them with the facts as well as the significant risks associated with not being vaccinated.18

The first organized immunization training for a group of 50 pharmacists was held in Seattle, Washington, in late 1994.1 In 1996, the American Pharmacists Association (APhA) established its Pharmacy-Based Immunization Delivery program, which the CDC endorsed. 19 The APhA Pharmacy-Based Immunization Delivery is an educational program that teaches pharmacists the skills needed to become a primary provider for both vaccine education and administration.19 This program teaches the basics of immunology and focuses on both the practice implementation and legal/regulatory issues with regard to vaccinations.19 More information on this program can be found at www. pharmacist.com/imz.

Although not all pharmacists will elect to obtain the certification needed to administer vaccinations, pharmacists who do not administer vaccines also have an important role in promoting the importance of immunization in other ways, which include: (1) history and screening of patient, (2) patient counseling, (3) documentation, (4) formulary management, (5) administrative measures, and (6) public education and awareness.22

Vaccinations and Current Recommendations
In September 2009, the FDA approved the H1N1 vaccine, and to date, 5 vaccine preparations are available for the prevention of the H1N1 virus. ACIP recommends that certain patient populations receive the H1N1 flu vaccine, including pregnant women, individuals aged 6 months to 24 years, individuals aged 25 to 64 with medical conditions that are associated with a higher risk of flu complications such as asthma and diabetes, health care and emergency medical workers, and those individuals who are caregivers of children less than 6 months of age.24

Each year, ACIP releases its recommendations for immunization schedules per specific age group, including individuals 0 to 6 years of age, those 7 to 18 years of age, adults, and a catch-up schedule for those children and adolescents who may have missed certain immunizations. The 2010 immunization schedules will be published in the CDC’s Morbidity and Mortality Weekly Report on January 8, 2010, and will be posted on the CDC Web site. For a complete listing of recommendations per age group, please visit the CDC Web site at www.cdc.gov/ vaccines/recs/schedules/default.htm.

In addition, for those individuals traveling abroad, certain vaccinations may be necessary before travel. Information regarding vaccinations for travel can be found on the CDC Travelers’ Health Web site at www.cdc.gov/travel. A list of vaccine resources on the Web is found in Table 2. 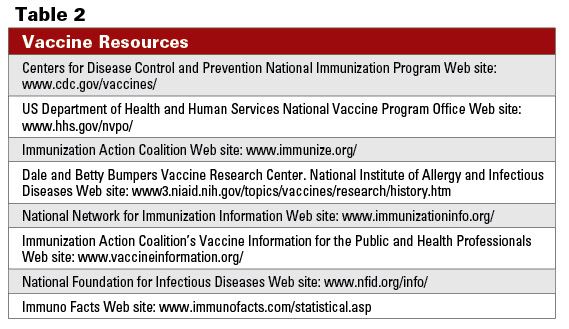 Common Misconceptions about Vaccinations
Over the years, the safety of vaccinations has been heavily debated. One of the biggest issues of debate is regarding the possible link between autism and thimerosal–mercury preservative that was found in vaccines, particularly the measles-mumps-rubella (MMR) vaccine. The Institute of Medicine (IOM) conducted a thorough review on this possible link, and the final report from the IOM, “Immunization Safety Review: Vaccines and Autism,” released in May 2004, stated that no link was found between the MMR vaccine and autism.25,26 Currently, with the exception of some influenza vaccines, none of the vaccines used in the United States to protect preschoolaged children against 12 infectious diseases contain thimerosal as a preservative. 26

Although thimerosal no longer is found in childhood vaccines, some parents still have concerns about vaccinations, and patient education is key to easing these fears and concerns. In the February 2009 issue of Clinical Infectious Diseases, results from a new review report that no link exists between vaccines and autism.27

Providing patients with the facts is fundamental to eliminating some of the common misconceptions regarding vaccinations. According to the CDC, many misconceptions about vaccines exist, which include28:

1. “Diseases had already begun to disappear before vaccines were introduced, because of better hygiene and sanitation.”

2. “The majority of individuals who get diseases have been vaccinated.”

3. “There are ‘hot lots’ of vaccine that have been associated with more adverse events and deaths than others. Parents should find the numbers of these lots and not allow their children to receive vaccines from them.”

4. “Vaccines cause many harmful side effects, illnesses, and even death–not to mention possible long-term effects we don’t even know about.”

5. “Vaccine-preventable diseases have been virtually eliminated from my country, so there is no need for my child to be vaccinated.”

6. “Giving a child multiple vaccinations for different diseases at the same time increases the risk of harmful side effects and can overload the immune system.”

Conclusion
Immunizations are crucial to protecting patients from developing and dying from vaccine-preventable diseases, and in order to be successful, a team effort is required for all health care professionals to increase immunizations.29 Pharmacists are in a pivotal position to increase awareness about the importance of vaccinations and identify those patients who may benefit from specific vaccinations. By continually increasing awareness about the availability and importance of vaccinations, patients can make informed decisions to protect themselves and their family members. â– 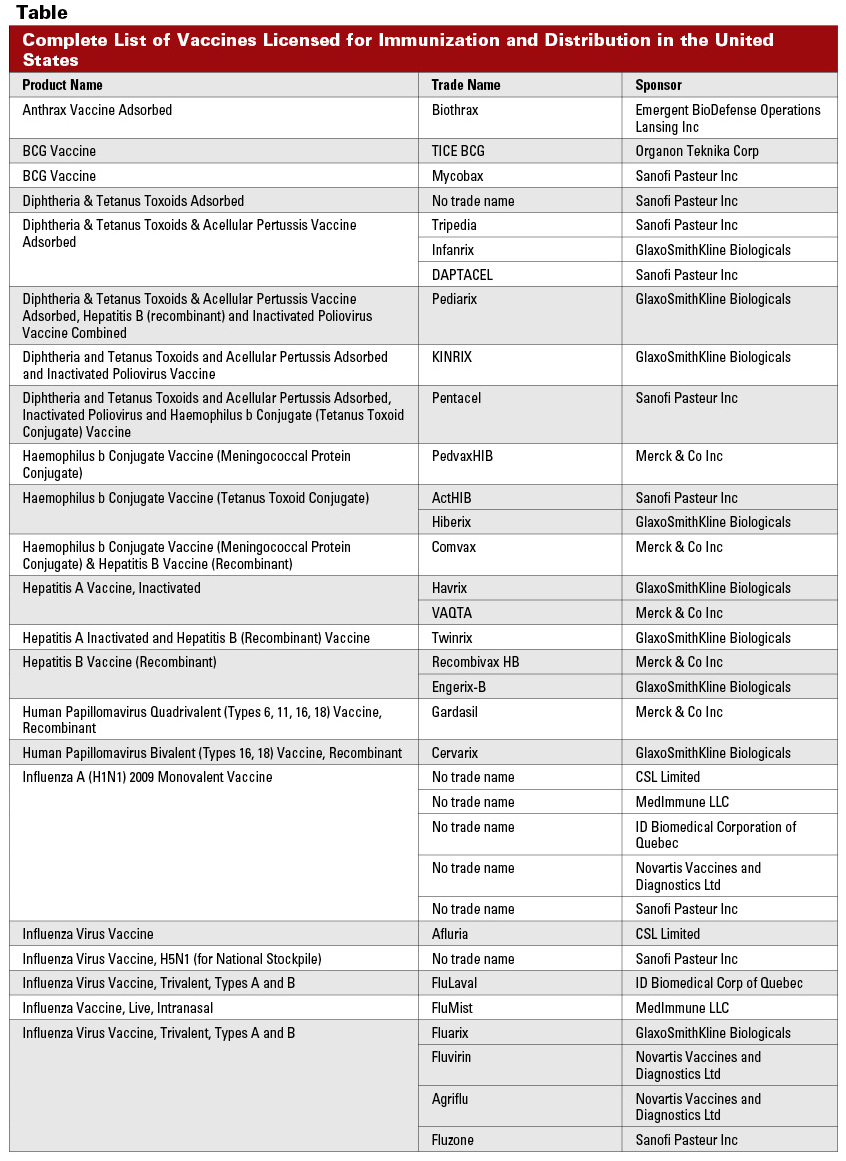 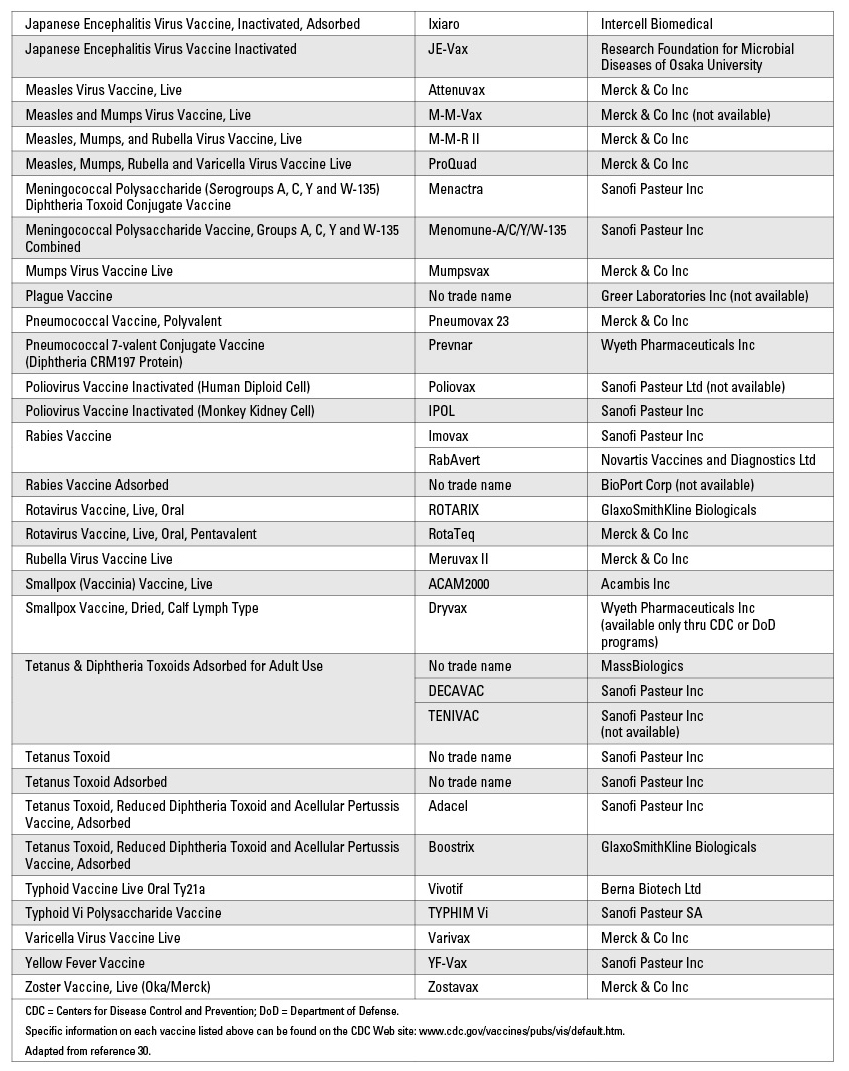 2.Â Â Â Â Â  What do cows have to do with vaccines? National Institute of Allergy and Infectious Diseases Web site. www3.niaid.nih.gov/topics/vaccines/research/cowsVaccines.htm. Accessed November 25, 2009.

20.Â With Maine on board, pharmacists in all 50 states can vaccinate. American Society of Health System Pharmacists Web site. http://www.ashp.org/import/news/HealthSystemPharmacyNews/newsarticle.aspx?id=3199. Accessed November 30, 2009.

28.Â Some common misconceptions about vaccines and how to respond to them. Centers for Disease Control and Prevention Web site. http://www.cdc.gov/vaccines/vac-gen/6mishome.htm. Accessed December 1, 2009.

30.Â Complete List of Vaccines Licensed for Immunization and Distribution in the US. Food and Drug Administration Web site. http://www.fda.gov/BiologicsBloodVaccines/Vaccines/ApprovedProducts/ucm093833.htm. Accessed November 25, 2009.


2292
Vaccinations: The Expanding Role of Pharmacists
Vaccine-preventable diseases kill more Americans than breast cancer, HIV/AIDS, or traffic accidents. Pharmacists are in a unique position to counsel patients about vaccines and administer them to target groups.
/publications/issue/2010/January2010/FeatureFocusVaccinations-0110