The Elderly Patient with Asthma
2010-04-14 03:53:32
Jeanette Y. Wick, RPh, MBA, FASCP
In the United States, elderly patients with asthma are the most likely group to die of this breath-robbing disease. Advice is presented to help elderly asthma patients manage their disease and live longer lives.

Age and asthma can be and often are a lethal combination. Asthma’s symptoms—shortness of breath and wheezing—leave its victims gasping for air. Cough and tight chest—particularly at night and in the early morning—are intrusive. In the United States, elderly people with asthma are more likely to die of this breath-robbing disease than any other age group.1 Almost all of these deaths are preventable. How can we help our elders manage this disease better and live longer lives with less morbidity?

Elderly patients who have asthma can be classified in 2 groups: (1) those who were diagnosed as children and have carried the diagnosis for decades (long-standing asthma), and (2) those who are diagnosed late in life (late onset).

Traditionally, we believed that elders with long-standing asthma tend to have shorter symptom-free periods, more emergency needs, poorer lung function, and more hospitalizations than patients with late-onset asthma.2 Increasingly, the differences between long-standing and late-onset asthma seem less clear, with both leading to gradual but significant loss of ventilary capacity.2-4 This is particularly concerning in elders, because the aging lung is less pliant and flexible. The chest wall is more fixed due to age-related bone changes, and diaphragm flattening puts older lungs at a mechanical disadvantage. Parenchymal recoil is reduced.5-7 Compared with younger people, elders breathe at higher lung volumes, increasing the burden on chest walls and respiratory muscles and increasing metabolic demand.8 Of utmost concern is elders’ reduced ability to perceive bronchoconstriction.9

Atopic vs Nonatopic
Asthma diagnosed in childhood is usually atopic (or extrinsic) or classical allergic disease. These patients produce abnormal amounts of immunoglobulin E (IgE) when confronted with environmental allergens. They often present with the triad of asthma, eczema, and hay fever.10 This type of asthma develops most often in childhood, with risk becoming moderate in mid-life and low after age 65.11 Elevated IgE levels at any time in life increase the likelihood of an asthma diagnosis later, but sensitization to an allergen late in life is less likely. Elders with long-standing asthma often have fixed bronchial obstruction secondary to years of bronchial remodeling.12 This disease often looks like chronic obstructive pulmonary disease (COPD), and in patients who smoke, their diagnosis may move toward COPD.13

Nonatopic (intrinsic) asthma is more common in elders. In nonatopic asthma, airway activation occurs in response to viral or in vivo allergens; researchers have not identified these specifically.14,15 In elders, this type of asthma is usually diagnosed during or  immediately after an upper respiratory infection.15

Diagnosis: Difficult
Among diagnostic tests used for asthma are the following:

Pulmonologists consider elders’ expected lung changes, and the potential for fixed bronchial obstruction specifically, when interpreting these tests.8,16 Although symptom reversibility is generally considered the differentiating factor between asthma and COPD, lack of reversibility does not eliminate the possibility of asthma.17,18 In up to 10% of elderly patients, comorbidities, sensory deficits, dental or facial musculature problems, fatigue, or cognitive impairment can make these tests difficult to impossible to perform.19 When that is the case, pulmonologists resort to other measures that are acceptable but harder to perform. 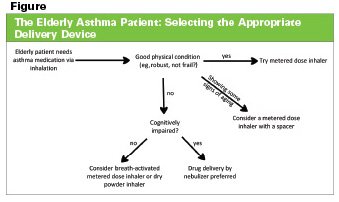 Treatment
Before medications are considered, some lifestyle changes are key. Because many asthma patients smoke, smoking cessation is critical. Exercise and weight loss are helpful. Allergen avoidance makes sense, although no studies confirm its benefit.20

Basic asthma treatment is similar in all age groups: corticosteroids for maintenance and exacerbation (preventers), and inhaled beta agonists (relievers) for rescue when attacks break through. Although this paradigm is simple, application in elderly patients becomes complicated. Elders are more sensitive to the adverse effects of drugs and more likely to take concomitant medications, increasing the risk of drug interaction. They may have difficulties manipulating inhalers and coordinating their breathing with the device. Cognitive impairment can be a serious impediment. 8 Medication generally comes in pressurized metered dose inhalers (MDIs), dry powder inhalers (DPIs), or nebulizers. Selecting the method of administering asthma medication to an elder is described in the Figure.

Beta2 Agonists and Anticholinergics
Beta2 agonists relax airway smooth muscle and may have an anti-inflammatory effect. They represent a first step when medication is needed intermittently, but only if the patient can recognize bronchoconstriction.20 Older patients generally respond well to beta2 agonists, but may be more likely to develop dose-dependent tachycardia, tremulousness, or palpitations. Hypokalemia—a known side effect—is increased in elders who take diuretics or insulin. Concurrent theophylline increases risk of myocardial complications in older patients.21,22 If elders use short-acting beta2 agonists (salbutamol/ levosalbutamol, terbutaline, metaproterenol, albuterol) more than twice a week for rescue, pharmacists should encourage them to see their physician, as this indicates suboptimal control. Long-acting beta2 agonists include salmeterol, formoterol, and bambuterol. Anticholinergics (ipratropium, tiotropium) work via vagal inhibition and are an alternative for elders who cannot use beta2 agonists or do not respond to beta2 agonists because of age-related receptor changes.8 Patients do not usually experience typical anticholinergic effects when these drugs are inhaled.

Corticosteroids
Steroids are indicated in all age groups, as they have decreased overall morbidity and mortality from asthma.23 Osteoporosis is a serious and common problem in the elderly, and oral corticosteroids increase its incidence and severity,24 so inhaled agents are preferred. Although inhaled agents decrease bone mineral density,25,26 studies have not yet documented increased fracture rates. The benefits of inhaled corticosteroids (ICSs) in older patients with asthma far outweigh the risks,27 but only about one third of patients with asthma use ICSs.28 Early initiation of the lowest effective dose with close monitoring is reasonable and life-saving. Although these are usually given by MDI or DPI, nebulization is possible, but only if absolutely necessary; the large doses needed in nebulization can cause or exacerbate osteoporosis.29 When inhaled by MDI, these drugs may cause dysphonia, cough, or oropharyngeal candidiasis.20

Anti-IgE Therapy
In allergy-related asthma, the monoclonal antibody omalizumab can be helpful. Administered as a subcutaneous injection every 2 to 4 weeks, omalizumab has been shown to reduce asthma symptoms in older individuals. Potential side effects include increased risk of parasitic infection and adrenal insufficiency.30

Other Drugs
Most asthma can be controlled using the agents described above. When it is not, methylxanthines, leukotrienemodifying agents, and cromones may help.

End Note
The Table describes key points for pharmacists with regard to asthma in the elderly. In addition to educating older patients with asthma about their disease, pharmacists should encourage annual vaccination against influenza and pneumococcal polysaccharide vaccine every 5 years. Very basic patient education about “preventers” and “relievers” should occur at each visit. â– 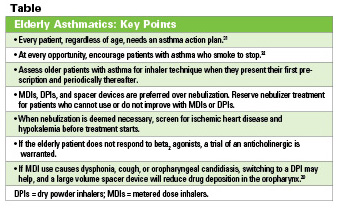 32. Bellia V, Pedone C, Catalano F, et al. Asthma in the elderly: mortality rate and associated risk factors for mortality. Chest. 2007;132:1175-82.
2609
The Elderly Patient with Asthma
In the United States, elderly patients with asthma are the most likely group to die of this breath-robbing disease. Advice is presented to help elderly asthma patients manage their disease and live longer lives.
/publications/issue/2010/April2010/ElderlyAsthmaPatients-0410