SGLT2 Inhibitors: A New Treatment Option for Type 2 Diabetes
2014-09-17 04:28:31
Jennifer L. Simon, PharmD, CPP; Sarah Timaeus; Caron Misita, PharmD, BCPS, CDE, CPP
Introduction
Diabetes mellitus is a chronic disease often requiring complex treatment regimens to prevent long-term complications.1 In 2010, it was estimated that 18.8 million adults and children in the United States were diagnosed with diabetes and another 7 million went undiagnosed, with the prevalence of diabetes expected to increase significantly by 2050.2,3 Various classes of medications have been approved by the FDA for the treatment of diabetes; however, few highly effective options are available with minimal adverse effects.1 Thus, the search continues for improved diabetes therapies.

The FDA recently approved 2 medications from a novel class called sodium- glucose cotransporter 2 (SGLT2) inhibitors. This article will detail the characteristics of these agents, summarize the evidence leading to their approval, describe their current place in therapy, and discuss ongoing research involving this novel class.

SGLT2 Inhibition
Each day, approximately 180 g of glucose are filtered from the glomeruli of a healthy adult, and almost all of the filtered glucose is reabsorbed from the glomerular filtrate and returned to the circulation.4 Of the filtered glucose, 90% is reabsorbed in the bloodstream by the SGLT2, located primarily in the luminal membrane of the proximal renal tubules.5 The cotransportation of glucose and sodium from the filtrate is driven by the active transport of sodium out of the basolateral cells by the Na/K-ATPase pump.4 Glucose is also transferred out of the cell with the concentration gradient and subsequently returned to the bloodstream by glucose transporters.

In type 2 diabetes mellitus (T2DM), renal glucose handling and transport is increased, likely due to upregulation of SGLT2. As a result, glucose excretion in the urine occurs only at higher plasma glucose levels, causing conservation of glucose and prolongation of hyperglycemia.4 Inhibition of SGLT2 activity reduces reabsorption of filtered glucose and lowers the blood glucose concentration at which glucose is no longer reabsorbed from the proximal tubule but is instead excreted. This concentration is known as the renal threshold for glucose.6,7 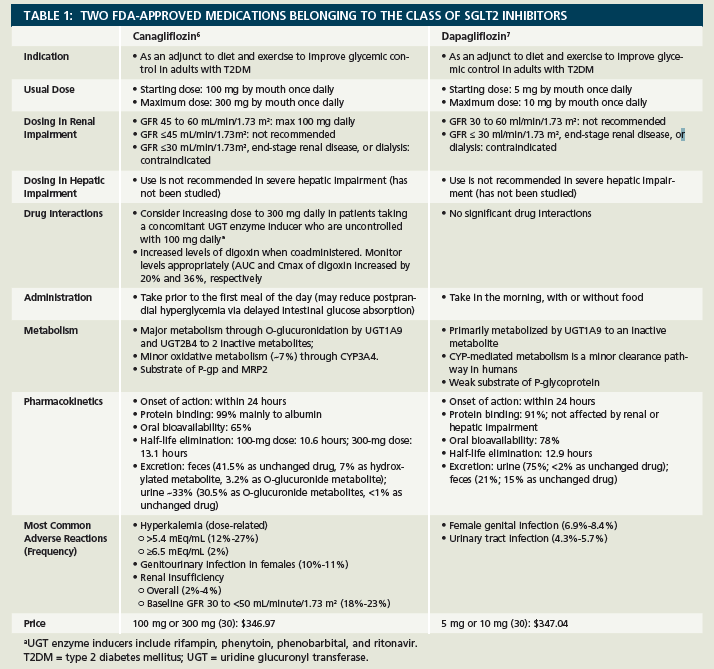 Canagliflozin
On March 29, 2013, canagliflozin became the first SGLT2 inhibitor to be approved by the FDA; it is currently indicated as an adjunct to diet and exercise in adults with T2DM.6 Studies have shown glycemic control benefits, weight reduction, and systolic blood pressure lowering with monotherapy as well as in combination with other antihyperglycemic agents.

Online Table 2 summarizes the effects of canagliflozin in several clinical trials, which show that canagliflozin 100 mg and 300 mg once daily significantly reduced glycated hemoglobin (A1C) in T2DM patients who had not achieved adequate control with diet and exercise,8 metformin,9 sulfonylurea,10 combination metformin and sulfonylurea,11 combination metformin and pioglitazone,12 and insulin (at least 30 U daily of basal, bolus, or combination).13 Canagliflozin 100 mg and 300 mg have also been shown to significantly decrease fasting plasma glucose (FPG), weight, and systolic blood pressure (SBP) compare with placebo and compared with glimepiride9 and sitagliptin.14 Regarding A1C reduction in T2DM patients inadequately controlled on metformin, canagliflozin 100 mg demonstrated noninferiority to glimepiride9 and sitagliptin,14 while canagliflozin 300 mg demonstrated statistical superiority to glimepiride9 and sitagliptin.14 Canagliflozin 300 mg also demonstrated superiority to sitagliptin in reducing A1C in patients with T2DM uncontrolled with metformin and sulfonylurea.15

Dapagliflozin
A second SGLT2 inhibitor, dapagliflozin, was approved by the FDA on January 8, 2014, as an adjunct to diet and exercise to improve glycemic control in adults with T2DM.7 Studies have shown benefits in glycemic control, weight reduction, and SBP reduction with dapagliflozin monotherapy and in combination with other antihyperglycemic medications. Online Table 2 summarizes the results of these trials.


In a phase 3 trial of T2DM patients inadequately controlled with diet and exercise, dapagliflozin significantly reduced A1C from baseline compared with placebo. This study included 2 exploratory cohorts, 1 studying evening dosing of dapagliflozin and 1 studying patients with a baseline A1C of 10.1% to 12%. The evening dose cohort saw similar reductions in A1C, FPG, and body weight to the primary cohort, with only 2.8% of patients complaining of nocturia. The high A1C cohort experienced greater reductions in A1C and fasting plasma glucose compared with the primary cohort, indicating that though these patients may present with preexisting glucosuria, dapagliflozin is still able to elicit a considerable improvement in T2DM control.18

Although it is currently only approved as monotherapy, dapagliflozin has been studied in combination with metformin,19-21 glimepiride,22 pioglitazone,23 and insulin (at least 30 U daily of basal, bolus, or both).24,25 In each trial, dapagliflozin significantly reduced A1C compared with placebo or was found to be noninferior to the active control (metformin or glipizide). Dapagliflozin has also been shown to significantly decrease FPG and weight compared with placebo, metformin, and glipizide. When added to pioglitazone monotherapy, dapagliflozin attenuated pioglitazone-induced weight gain and edema.23 Dapagliflozin 5 mg and 10 mg, added to insulin therapy with or without other oral antihyperglycemic drugs, decreased total daily insulin doses by 6.28 U/day and 6.82 U/day, respectively. 25 Total body weight decreased by up to 1.61 kg in the dapagliflozin groups compared with a weight gain of 0.43 kg in the placebo group.

In all trials, no clinically meaningful changes in electrolytes, renal function, or fasting lipid profiles were observed. Signs and symptoms suggestive of urogenital infections were more common in patients receiving dapagliflozin. However, these infections tended to be of mild to moderate severity, responded to standard treatments, and rarely led to drug discontinuation. In a long-term study, most urogenital infections occurred during the first year of treatment.26

Current Place in Therapy
The American Association of Clinical Endocrinologists’ (AACE) Comprehensive Diabetes Management Algorithm 2013 Consensus Statement lists SGLT2 inhibitors as a monotherapy option for T2DM patients with A1C <7.5%, or as a dual- or triple-therapy option for patients with baseline A1C ≥7.5% or patients who did not reach their A1C goal after 3 months of noninsulin monotherapy. The consensus statement cites the ability of SGLT2 inhibitors to provide glucose lowering without weight gain or risk of hypoglycemia as justification for their recommendation. In patients where weight loss is a therapeutic goal, the AACE recommends using an SGLT2 inhibitor or a GLP-1 receptor agonist along with metformin and intensive lifestyle management in preference over other therapies that promote weight gain.27 The most recent guidelines published by the American Diabetes Association do not address the use of SGLT2 inhibitors in the treatment of T2DM.1

Both canagliflozin and dapagliflozin have been shown to increase the risk of genital mycotic infections and should be used with caution in uncircumcised males and patients with a history of infections. Caution should also be used in patients at higher risk of symptomatic hypotension due to intravascular volume depletion, such as those with renal impairment (eGFR <60 mL/min/1.73 m2), the elderly, patients with low SBP, or patients taking antihypertensives. Blood pressure, serum creatinine, and eGFR should be monitored at baseline and periodically throughout treatment.6,7 Canagliflozin and dapagliflozin can increase hypoglycemia risk when used in combination with insulin or an insulin secretagogue; therefore, it may be necessary to decrease the insulin or insulin secretagogue dose when any of these medications are used in combination with an SGLT2 inhibitor. Increases in low-density lipoprotein (LDL) cholesterol (mean increase of 4.5% to 8% with canagliflozin6 and 2.9% with dapagliflozin7) have also been shown in studies with SGLT2 inhibitors; therefore, LDL should be monitored at baseline and periodically throughout treatment.6,7

* Article has been updated since original publication.