New Combination Therapies for the Treatment of Chronic Lymphocytic Leukemia
2020-02-25 14:00:00
Erin Kelley, PharmD, BCOP, and Jeff Engle, PharmD, MS
CHRONIC LYMPHOCYTIC LEUKEMIA (CLL) is the most common type of leukemia in adults and accounts for approximately 37% of new leukemia cases. An estimated 20,720 new cases of and 3930 deaths from CLL will occur in the United States in 2019.1 The median age at diagnosis of CLL is 72 years.1

Pathologically, CLL is a disease of neoplastic mature B cells within the blood, marrow, lymph nodes, and spleen.2 It is a chronic condition with survival often measured in years, and many patients can be observed over time before requiring treatment. Indications for treatment of CLL include significant disease-related symptoms (fatigue, night sweats, fevers, or weight loss), end-organ dysfunction, progressive disease in the lymph nodes or spleen, and progressive anemia or thrombocytopenia.3 Patients are generally categorized into 2 groups: those who are younger (<65 years of age), without comorbidities, and able to tolerate more intense treatment or those who are older and/or have significant comorbidities.

Patients with CLL may have genetic mutations that predict response to different treatments. Therapy choices are based on whether a patient has a TP53 mutation, del(17p), or an IGHV mutation. Patients whose leukemic cells have TP53 mutations or del(17p) have a generally worse prognosis and are less likely to respond to traditional chemotherapy with alkylating agents or purine analogs.4 Conversely, IGHV mutations (>2% mutated) are associated with favorable prognosis and response to chemoimmunotherapy.5

Over the past few decades, the treatment paradigm for CLL has changed dramatically. Historically, chemoimmunotherapy with alkylating agents and purine analogs comprised the backbone of treatment. In recent years, targeted oral agents such as ibrutinib (Imbruvica) and venetoclax (Venclexta) have been shown to improve outcomes in almost all populations of CLL patients. Currently, 2 preferred first line treatment regimens for all patients with CLL are ibrutinib or venetoclax plus obinutuzumab (Gazyva) (Table).3

A number of chemoimmunotherapy regimens, which combine traditional chemotherapy (ie, fludarabine [Fludara]) with medications intended to stimulate the immune system to eliminate malignant cells (ie, rituximab), are still recommended in the first-line setting; however, the preferred regimens generally include either ibrutinib or venetoclax. These new therapies have consistently improved progression-free survival (PFS) compared with traditional chemoimmunotherapy regimens and have also improved overall survival (OS) in some cases.6,7 In addition, targeted therapies are often better tolerated than chemoimmunotherapy, making them feasible options for older patients or those with comorbidities.

Ibrutinib
Ibrutinib is an oral irreversible inhibitor of Bruton tyrosine kinase (BTK), a kinase involved in the B-cell receptor (BCR) signaling pathway (Figure 1).8 Inhibiting the BCR pathway prevents malignant B-cell proliferation, survival, and migration. Ibrutinib is therefore used in a variety of B-cell malignancies, including CLL, mantle cell lymphoma, and marginal zone lymphoma. In 2014, ibrutinib was approved for patients with CLL who had received at least 1 prior therapy. Over the past few years, it has been compared with and found superior to chemoimmunotherapy regimens. The Alliance North American Intergroup Study (A041202) ( NCT01886872), E1912 (NCT02048813), and iLLUMINATE (̌NCT02264574) trials support ibrutinib’s current placement as a preferred first-line treatment for all patients with CLL. 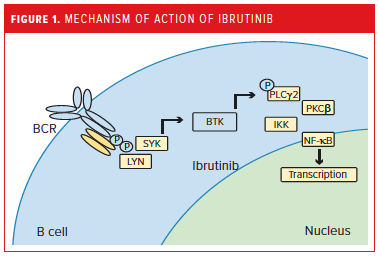 One potential drawback to ibrutinib therapy is its indefinite duration compared with traditional chemoimmunotherapy regimens, which are given for a defined number of treatment cycles. Ibrutinib is well tolerated in many patients but may cause serious AEs. The most common serious AEs of ibrutinib include cytopenias and their complications, cardiac arrhythmias, hypertension, second primary malignancies, and tumor lysis syndrome. Single agent ibrutinib is associated with grade 3 and 4 neutropenia (23%), thrombocytopenia (8%), and anemia (3%).11 Grade 3 or higher atrial fibrillation or flutter has been reported in 4% of patients, and 0.2% have experienced ventricular tachyarrhythmias. Hypertension (grade 3 or higher) occurs in 5% of patients on ibrutinib. Pharmacists play an important role in monitoring patients’ labs and helping them manage the AEs associated with ibrutinib. In addition, pharmacists can monitor for drug interactions associated with ibrutinib, which is metabolized by CYP3A4 and interacts with both CYP3A4 inducers and inhibitors. Antiplatelet medications also interact with ibrutinib.

Venetoclax
Venetoclax is a small molecule inhibitor of B-cell lymphoma-2 protein (BCL-2), an antiapoptotic protein overexpressed in B-cell malignancies including CLL (Figure 2).12 Venetoclax displaces apoptotic proteins BIM from BCL-2, which typically suppress cell death mediators BAX/BAK. The repression of BAX/BAK allows the leukemic cells to undergo apoptosis. Venetoclax was originally approved by the FDA in 2016 for patients with del(17p) CLL who had received at least 1 line of therapy.13 In 2018, the FDA approved venetoclax plus rituximab for patients with relapsed or refractory CLL. The approval was based on the MURANO trial, which demonstrated superior PFS with venetoclax plus rituximab compared with BR.14 Since these initial approvals, venetoclax has been studied in different combinations and treatment settings within CLL and other B-cell malignancies. 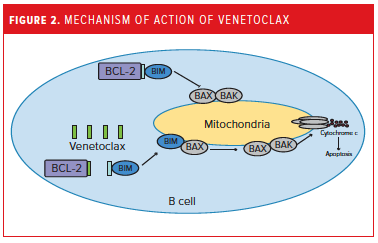 The primary end point of the study was investigatorassessed PFS. At data cutoff, more primary end point events had occurred in the chlorambucil group than the venetoclax group (77 vs 30 events; HR for progression or death = 0.35; 95% CI, 0.23-0.53; P<.001). The estimated 24-month survival rate was also higher for venetoclax (88.2%) versus chlorambucil (64.1%; HR = 0.35; 95% CI, 0.23-0.53; P<.001). Results were consistent across high-risk patient groups with TP53 deletion or mutation and unmutated IGHV. AEs were observed at similar rates between treatment arms; the most common grade 3 or 4 AE was neutropenia (52.8% with venetoclax and 48.1% with chlorambucil). Grade 3 or 4 febrile neutropenia and infections were reported in 5.2% and 17.5% of patients receiving venetoclax and in 3.7% and 15% of patients administered chlorambucil. Tumor lysis syndrome (TLS) was reported in only 3 patients in the venetoclax-obinutuzumab, and all 3 cases occurred during initial obinutuzumab infusions prior to beginning treatment with venetoclax).

The NCCN has incorporated venetoclax plus obinutuzumab into treatment guidelines as a preferred firstline treatment for patients with or without del(17p) or TP53 mutation positive CLL.3 An advantage with venetoclax compared with ibrutinib is the defined treatment course. Pharmacists can play a role in the management of venetoclax by identifying drug interactions, as it is a CYP3A4 substrate. Also, pharmacists can aid in identifying patients at risk for TLS and recommend appropriate fluid management and laboratory tests to mitigate TLS.

Venetoclax and Ibrutinib
Given the efficacy of BTK and BCL-2 inhibition in CLL, studies evaluating the combination of BTK and BCL-2 inhibitors have been conducted. The phase 2 CLARITY trial (NCT00213135) was a single-arm study of ibrutinib plus venetoclax for patients with relapsed or refractory CLL.15 Ibrutinib was given for 2 cycles with venetoclax added at week 9 with the standard dose escalation.13 The primary end point of the study was measurable residual disease (MRD) fewer than 1 CLL cell in 10,000 leukocytes in both peripheral blood (PB) and bone marrow (BM) after 14 months of therapy. In the 53 evaluable patients, there was an 89% response rate with 27 patients (51%) achieving a complete response (CR) or CR with incomplete BM recovery. Nineteen patients (36%) achieved the primary end point of MRD negativity in the BM at 14 months of therapy, whereas 28 patients (53%) were MRD negative in PB at the same time point. An additional 11 patients achieved MRD negativity in the BM after 26 months of therapy.

A second study investigated ibrutinib plus venetoclax in patients with newly diagnosed CLL and at least 1 of the following features: del(17p), TP53 mutation, del(11q), unmutated IGHV, or aged 65 years or older.16 The 80 patients enrolled received ibrutinib for 12 weeks with the addition of venetoclax in week 13. Combination therapy was given for a total of 24 cycles, and patients with MRD at the end of the treatment period could continue on ibrutinib monotherapy. The primary end point of the study was the best response at any time during treatment and for up to 2 months after completion of combined therapy. Fifty-nine patients (74%) achieved a CR or CR with incomplete count recovery as their best response. Responses were seen across all subgroups, including those with high risk features. Grade 3 or 4 neutropenia occurred in 24% of patients during ibrutinib monotherapy and 39% of patients during combination therapy with only four patients experiencing neutropenic fever. The most common nonhematologic AEs were any grade of easy bruising (60%), arthralgia (48%), and diarrhea (41%). The combination appears to be safe and highly effective for patients with CLL. An ongoing phase 3 clinical trial is investigating the combination compared with chlorambucil and obinutuzumab for treatment of patients with newly diagnosed CLL.17

Conclusion
The treatment of CLL has changed significantly since the introduction of novel, targeted therapies that are improving patient outcomes. These therapies have unique administration schedules and toxicities, and they often require a high level of attention and monitoring from health care professionals. Integrated health care teams—including physicians, nurse practitioners, physician assistants, pharmacists, and nurses—are well positioned to handle these patients because each member of the team has a specific role and can address specific issues during treatment. Pharmacists in particular can provide patient education, medication therapy management, and treatment monitoring for safety and efficacy. As the number of oral oncolytics grows, the need for such services will only continue to increase.

This article has undergone a peer review process by pharmacists in The Excelera Network.
ERIN KELLEY, PHARMD, BCOP, and JEFF ENGLE, PHARMD, MS, are hematology/oncology clinical pharmacists at the University of Minnesota Masonic Cancer Clinic, Fairview Specialty Pharmacy in Minneapolis, Minnesota.
REFERENCES
66160
New Combination Therapies for the Treatment of Chronic Lymphocytic Leukemia
Patients with CLL may have genetic mutations that predict response to different treatments.
/publications/Directions-in-Pharmacy/2020/February2020/new-combination-therapies-for-the-treatment-of-chronic-lymphocytic-leukemia