The study recently published in the Journal of the American Pharmacists Association examined community pharmacy density across 48 rural and urban primary care service areas of Oregon and how it correlated with readmission rates at Oregon’s 58 hospitals.

Unsurprisingly, rural hospitals were more likely to reside in areas with low pharmacy density, while urban hospitals were more likely to be in areas with high pharmacy density. In one of Oregon’s rural communities, there was a single pharmacy open 54 hours a week. Comparatively, some major urban areas had multiple pharmacies collectively open more than 3800 hours a week.

Readmission rates were determined through claims data on patients 65 years or older who were readmitted within 30 days from July 2012 to June 2013. Notably, areas with low pharmacy density had a disproportionately greater number of older patients—a population that typically has greater demand for pharmacy services. 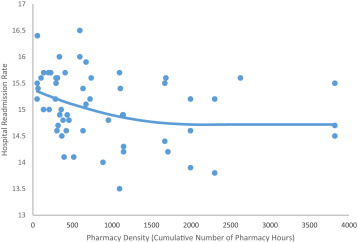 Each dot represents a hospital in Oregon

Importantly, pharmacists in Oregon are recognized as health care providers. That means the state’s pharmacists can receive reimbursement for performing clinical pharmacy services, enabling them to more fully use their skills and knowledge to treat patients.

“The modern pharmaceutical profession is increasingly being recognized as an important partner in health care, and as its services continue to expand, it will help even more,” stated senior study author David Lee, an assistant professor in the Oregon Health & Science University College of Pharmacy. “This research shows that pharmacy access can help people from going back to the hospital. For older populations who often find hospital experiences quite exhausting, that's extremely important to their overall health.”

Several hospitals across the country have made efforts to facilitate improved pharmacy access, such as opening 24-hour community pharmacies. However, efforts are also needed to ensure that further disparities aren’t created, as a previous study suggested that pharmacy access is increasing disproportionately in urban areas, given the recent growth in pharmacy-based clinics primarily in more populated regions.

A promising remedy to this problem in rural communities is telepharmacy.