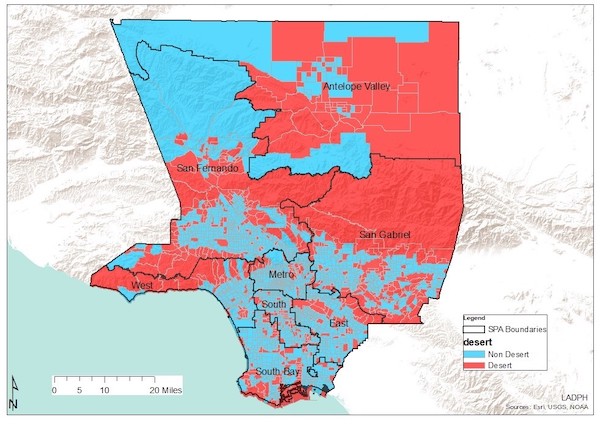 A study by the University of California, Irvine (UCI) has identified “pharmacy deserts”—communities where the nearest pharmacy is at least 1 mile away— in Los Angeles County. This is the first to provide a record of pharmacy deserts in California.

According to investigators, Black, Latino, and low-income communities in the United States have historically lacked nearby access to pharmacy services. Published in the Journal of Racial and Ethnic Health Disparities, this study describes pharmacy deserts in terms of social determinants of health, such as owning a vehicle, crime rates, and poverty, to determine which communities have the greatest need for pharmacy access.

“These social determinants of health compound the negative effects of pharmacy shortage through competing needs,” said Cheryl Wisseh, a health sciences assistant clinical professor of clinical pharmacy practice at UCI and the study’s first author, in a prepared statement. “For example, some residents living below the poverty line may choose to forgo picking up their medications so that they can pay for food, rent, and other necessities.”

A pharmacy shortage likely equates to fewer clinical pharmacy services, such as health screenings, vaccines, and medication management, Wisseh added. Her goal is to reduce health disparities by having social detriments addressed in pharmacy practice, public health, and social justice.

According to investigators, since pharmacies are a large distributor of vaccines across the United States, the coronavirus disease 2019 (COVID-19) pandemic makes access to pharmacists even more pressing.

“As the COVID-19 vaccines start rolling out, pharmacists will be key to the rapid and equitable distribution and administration of doses, just as they have been with COVID-19 testing,” said Jan D. Hirsch, founding dean of UCI’s School of Pharmacy & Pharmaceutical Sciences, in a prepared statement.

Wisseh added that the communities within pharmacy deserts are particularly vulnerable to COVID-19.

“The same forces of structural inequity and systemic racism that contribute to the formation of Los Angeles pharmacy deserts contribute to the disproportionate test positivity, incidence, and mortality rates of COVID-19 in racial and ethnic minorities,” she said.

One method of intervention could be having the county add pharmacists to local clinics and other primary care settings to provide clinical services. As an example, Wisseh works with county-led programs in South Los Angeles to improve pharmacy access for patients in her clinical practice.

According to Wisseh, she plans to conduct a similar study on a larger scale to examine how pharmacy deserts contribute to whether minority communities take medications as prescribed and investigate disparities in available medications within pharmacies.