3 Legislative and Regulatory Updates Pertinent to Pharmacists
2016-03-11 03:00:00
Meghan Ross, Senior Associate Editor
Between long shifts, pharmacists may not have time to stay on top of the latest legislative and regulatory matters pertinent to their profession.

The US Department of Health and Human Services (HHS) released a proposed rule last fall addressing nondiscrimination in health care programs and activities that will impact pharmacies.

Under this proposed rule, pharmacies would be required to offer language assistance services to patients with limited English, unless the pharmacy would face “undue financial burden,” or if doing so would “result in a fundamental alternation in an entity’s health program or entity,” Ventresca explained.

This disclaimer also applies to the requirement that pharmacies provide auxiliary aids and services and the accessibility of programs through electronic and information technology.

HHS does not expect compliance with the proposed rule to cost too much, and training employees on these new requirements is voluntary. HHS anticipates a one-time training to employees when the rule is finalized.

In response to this proposed rule, APhA submitted several comments and concerns in November 2015.

First, APhA said complying with the rule would add costs and burdens beyond other federal civil rights laws. It argued that HHS had underestimated the costs related to offering language assistance services and auxiliary aids and services.

Ventresca explained that pharmacies would either have to work with a third party to translate medication inserts or use an over-the-phone translator—both of which can be costly.

In addition, APhA took issue to a portion of the rule that said pharmacists would not be able to provide medical information to minor children who translate for their guardians. Ventresca noted that she saw some split thoughts on this while reviewing comments.

“I was one of these children translating for my grandparent, which is probably the reason why I noticed this especially,” she said. “In my teens, I would go into the pharmacy, pick up my grandma’s medication, and go home and tell her what she was supposed to do with it, or she would be standing beside me.”

APhA stated that this requirement in the nondiscrimination proposed rule could negatively impact care for those with limited English skills. Those in favor of this restriction have argued that it puts extra pressure on children, and there may be communication issues if the minor is not as skilled in their guardian’s language.

The HHS Office of Civil Rights is currently considering APhA’s comments as it drafts its final rule to implement Section 1557.

<a data-cke-saved-href="http://www.pharmacytimes.com/publications/health-system-edition/2015/july2015/provider-status-dominates-pharmacy-policy-agenda" href="http://www.pharmacytimes.com/publications/health-system-edition/2015/july2015/provider-status-dominates-pharmacy-policy-agenda" "target="_blank">HR 592/S 314 amends section 1861 of the Social Security Act to recognize pharmacists’ services within Medicare Part B.

“Hopefully, these bills are not new to you,” Spira said.

Spira noted this isn’t just an APhA project. The association has been collaborating with other pharmacy organizations and stakeholders to promote patient access and coverage to pharmacists’ care services.

“This is what the legislation is all about,” Spira said. “We want to see pharmacists as part of the health care team. We already are, but we want to be recognized as being part of that team.”

He presented the following 2 maps showing which areas of the country were considered MUAs, MUPs, or HPSAs. 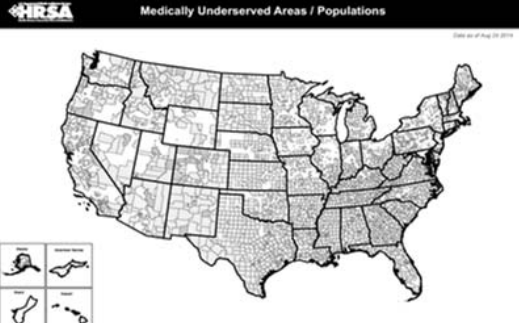 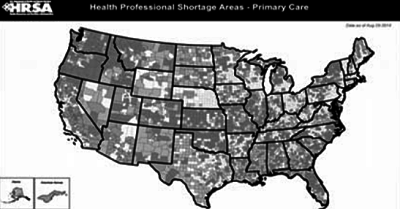 “It really is a large portion of our nation, unfortunately, that lacks proper health care and lacks access to health care,” Spira said. “And that’s where you all come in.”

Since it was introduced about a year ago, more than 40% of the Senate and 60% of the House of Representatives are supporting pharmacist provider status legislation.

Although there has been no opposition to the proposed legislation, and the feedback has been positive overall, cost will be a challenge. Other challenges include the fact that Congress has an abbreviated schedule, and with this year’s election, there is a limited window of opportunity, Spira said.

The next steps are getting a Congressional Budget Office (CBO) score, meaning a cost estimate for the bill. Spira explained that APhA is expecting an unofficial, “back of the envelope” score that would allow it and the coalition to go back to the CBO if they believe the score is too high and to discuss how they came up with that score. It would also allow APhA and the coalition to alter the bill to potentially lower the score.

Spira said they hope to see a score within a few weeks, and then a few weeks later, they can expect a House hearing.

Last fall, the US Centers for Disease Control and Prevention (CDC) issued draft guidance for prescribing opioids for chronic pain, which were fairly controversial because they were only released via webinar and had a short, 2-day comment period.

In response, APhA and the NASPA Foundation submitted comments on the CDC’s process and called for the agency to reopen the topic for comment.

“Everyone knows that prescription drug abuse has received a lot of attention. It’s important because people are dying every day,” Ventrusca said. “To say that there’s urgency behind these guidelines is an understatement.”

In December, the CDC did open it up for public comment, and APhA again submitted comments in January 2016.

Also in January, the CDC assembled a workgroup to look at the guideline’s evidence and recommendations. There were some changes in the language, and the modifications were generally well-received, but many called for the guidelines to be upgraded regularly to reflect new, stronger evidence.

Inside the guidelines are recommendations for primary care providers who prescribe opioids for chronic care outside of active cancer treatment, palliative care, and end-of-life care. There are 3 recommendations for when to initiate or continue opioids for chronic pain; 4 for opioid selection, dosage, duration, follow-up, and discontinuation; and 5 for assessing the risks of opioid abuse.

APhA’s comments on the guidelines included the fact that a team-based approach to care including pharmacists was needed. In addition, the guidelines should mention that the lowest-effective dose should be patient-specific, and more education is needed for health care professionals. Also, there should be more guidance and support on how to store and dispose of unused opioids.