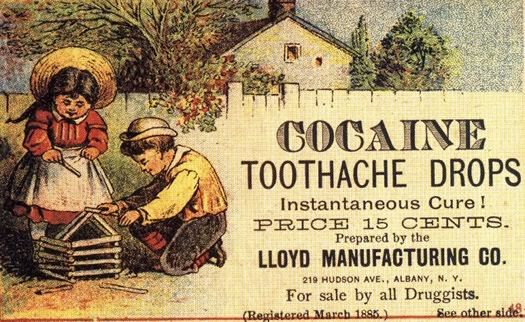 The ad, which touts its 15-cent drops, promises “instantaneous cure.” In the late 1800s, cocaine was considered a possibility for local anesthesia.

All Over Albany cited a Brooklyn Union article that described a method of using cocaine to numb pain in dental procedures. According to the article, teeth could be drawn and nerves removed with little or no pain.

The method involved drying the patient’s gums and then brushing them in 3 applications with a solution that included cocaine. After that, teeth could be pulled with no pain. In another case, a tooth was drawn without pain by winding a cotton ball soaked in 2 drops of 5% solution around a patient’s tooth.

Hearing of news like this may have perpetuated Lloyd Manufacturing Co, an extension of a pharmacy run by a man named Charles E. Lloyd, to create cocaine toothache drops.

In the early 1900s, cocaine’s drawbacks started to make the rounds, and novocaine became the preferred local anesthetic, instead.

All Over Albany reported that the names of Lloyd and his partner, S. Dexter Pilsbury, can be found on the US Patent Office’s registry of labels from 1885 for the cocaine toothache drops. The 2 men were close in age and lived about a block away from each other, according to All Over Albany. Lloyd was likely a clerk at the pharmacy, while Pilsbury’s family had ties to the administration of the penitentiary.

All Over Albany could not track down why the 2 men did business together, but Pilsbury inherited a large fortune and could have been an investor in the product.