An examination of payer coverage for multiple sclerosis drugs shows variation in how these drugs are covered and in the evidence that payers review to make these decisions.

Background: In US healthcare, individual payers create their own prescription drug coverage policies. This can lead to differences in how payers cover multiple sclerosis (MS) drugs and can thus affect patients’ access to them.

Objectives: To examine how the largest private payers cover MS drugs relative to their corresponding FDA approvals and to the evidence that payers report reviewing when formulating their policies.

Methods: We identified coverage policies for disease-modifying MS drugs issued by the 10 largest private payers that make their policies publicly accessible. We categorized each policy relative to the drug’s corresponding FDA approval as consistent, more restrictive, less restrictive, or “mixed,” ie, more restrictive than the approval in 1 way, but less restrictive in another. We then categorized the evidence that the payers reported reviewing in their policies into 6 categories: randomized controlled trials (RCTs); other clinical studies (eg, non-RCTs or observational studies); clinical reviews; health technology assessments; clinical guidelines; or cost-effectiveness analyses.

Conclusions: We found variation in how the included payers cover MS drugs and in the evidence that they report reviewing in their coverage policies.

Compared with healthcare systems in other developed countries, the healthcare system in the United States is notably fragmented, with multiple decision makers at the national and local levels.1-3 This fragmentation is apparent in the insurance market, which consists of multiple public payers (including Medicaid, Medicare, the Children’s Health Insurance Program, and the Veterans Health Administration) and private payers. As a consequence, multiple sclerosis (MS) patients across the United States receive their prescription drug insurance coverage from a variety of healthcare payers. Because payers develop their own coverage criteria to guide how their enrolled beneficiaries use drugs and biologics, different patients receiving drug coverage from different payers may have differing access to MS drugs.

The current study builds on this body of research by examining how the largest US-based private payers cover MS drugs. Our study had 2 objectives. First, we compared how the largest private payers covered disease-modifying drugs relative to their FDA approval. Second, we examined the evidence base that the payers reported reviewing when formulating their coverage policy.

We identified the largest US private payers in terms of market share as reported by the National Association of Insurance Commissioners.9 We then searched each payer’s website to determine whether the payer made its coverage policies publicly accessible. We included the 10 largest payers that make their coverage policies publicly accessible. We excluded Kaiser Permanente and the WellCare Group because they do not publish the required coverage information. We included the following payers in this study (ranked in order of size): UnitedHealthcare, Anthem, Humana, Health Care Service Corporation (HCSC), Aetna, Highmark, Centene, Independence Health Group, Blue Cross Blue Shield of Florida, and Blue Cross Blue Shield of Michigan.

We obtained each drug’s FDA label from the FDA website.10 The included FDA labels were current as of April 1, 2016. The drugs in the sample were indicated for patients with relapsing forms of MS (RRMS). Interferon beta-1a (Avonex) and interferon beta-1b (Betaseron and Extavia) were additionally indicated for patients who had experienced a first clinical episode and had magnetic resonance imaging (MRI) features consistent with MS.

We compared each coverage policy with the drug’s corresponding FDA approval, accounting for the labeled indication, contraindications, and black box safety warnings. We used an approach similar to what we used to examine coverage policies for rheumatoid arthritis drugs in a previous study.5 First, we determined whether a drug was covered by the payer. We then categorized payer coverage for MS drugs as more restrictive than the FDA approval (the payer placed conditions on coverage beyond the FDA approval); consistent with the FDA approval; less restrictive than the FDA approval (the payer provided coverage for off-label usage not included in the FDA label); or mixed (the payer’s coverage policy was more restrictive than the FDA label in 1 way, but was less restrictive in another). An example of a mixed coverage policy was Centene’s policy for interferon beta-1a (Rebif). Centene covered interferon beta-1a (Rebif) for patients with clinically isolated syndrome (an initial episode of neurologic symptoms of duration of at least 24 hours caused by demyelination or inflammation) with MRI features consistent with MS, which was an off-label usage, but covered the drug only for patients who had first failed 2 or more alternative drugs, a condition not included in the FDA label.

Evidence Base the Payers Reported Reviewing

We reviewed each coverage policy to identify the evidence that the payers cited or discussed reviewing within it. We categorized the evidence into the following 6 categories: randomized controlled trials (RCTs), other clinical studies (eg, nonrandomized controlled trials, prospective cohort studies, and consecutive case series studies), clinical reviews (including systematic reviews of clinical evidence), clinical guidelines, health technology assessments, and cost-effective analyses. We did not account for studies that did not pertain to the drug of interest, eg, epidemiological studies, or studies that were not published in the peer-reviewed literature or promulgated by major clinical societies or health technology assessment agencies. We reported the frequency that the payers reviewed evidence in each category.

Not all payers reported the evidence that they reviewed in each of their policies. Aetna and Anthem reported reviewing the most studies in their coverage policies, for an average of 15.6 and 7.7 pieces of evidence per policy, respectively. Humana and Centene reported reviewing the fewest studies, for an average of 0.3 and 0.4 studies per policy, respectively (Figure 2).

The restrictiveness of the private payer coverage of MS drugs is broadly consistent with other research that has compared payer coverage of drugs and medical devices with their corresponding FDA approval.5,11 While the FDA is charged with ensuring that drugs are “safe and effective,” commercial payers assess whether drugs are “medically necessary” when judging coverage.12 Therefore, while the FDA must rely on evidence of a drug’s safety and efficacy, payers must additionally weigh other factors in their assessment, including benefit-risk trade-offs, the availability of alternatives, costs, and cost-effectiveness.

The variation among private payers’ coverage policies is also consistent with previous research.6 There are several potential reasons for this variation. It may be that payers use different decision-making criteria when judging drug coverage. Indeed, we found that payers report reviewing a different evidence base in their coverage policies, both in terms of the number of studies reviewed and the types of study reviewed. We found that only 1 payer (Aetna) reviewed evidence that fell into each evidence category. It is likely that some payers more thoroughly report the evidence that they review when formulating their coverage polices than do other payers.

While we found that only Aetna reported reviewing cost-effectiveness analyses in their coverage policies, it is likely that other payers consider economic factors when judging drug coverage.13 It is also likely that volume-based discounts obtained from product manufacturers affect how plans cover drugs; as this information is proprietary, however, we were unable to account for it in this study.14

It may also be that input from customers (eg, large employers) affects drug coverage decisions and contributes to variation among payers.15 The identified variation could be due to payers tailoring their coverage policies to their own beneficiary populations or offering more generous drug coverage to attract enrollees.

Drug manufacturers must account for US payers’ evidence requirements when creating clinical development programs for their products. The identified differences in the evidence base that the payers report reviewing point to challenges for manufacturers when attempting to address payers’ evidentiary needs. Greater transparency in how payers use evidence in decision making would allow manufacturers to more readily meet payers’ requirements and potentially speed patients’ access to treatments.

Not all payers issued publicly accessible coverage policies for each of the included drugs, a finding consistent with previous research.4-6 Further, our findings may not be generalizable to payers not included in our study. We do not account for the appeals process that is typically available to beneficiaries if coverage of their preferred drugs is denied.

We did not consider symptomatic and reparative therapies in this study, eg, dalfampridine, a drug indicated to improve walking in patients with MS. We also excluded the recently approved daclizumab because it was first approved by the FDA to treat MS after we obtained the coverage policies for this analysis.17

Researchers in various countries have examined the influence of evidence and other factors in payer coverage of drugs and other medical technologies.18-22 However, in this study, the sample size was insufficient to facilitate an empirical evaluation of the relationship between coverage and the evidence the payers reported reviewing.

Our data illustrate variation in how payers in our sample cover disease-modifying MS drugs and suggest that patients enrolled in different health plans may have differential access to these drugs. We found that the evidence that payers reported reviewing in their coverage policies varied in terms of volume and composition. Uncertainty in payers’ evidence requirements makes it challenging for manufacturers to design clinical programs to support their products because the generated evidence may not be sufficient for all payers.

Source of Funding: This study was funded by Bayer HealthCare Pharmaceuticals, Inc.

Author Disclosures: The authors report no relationship or financial interest with any entity that would pose a conflict of interest with the subject matter of this article.

1. Elhauge E. Why we should care about health care fragmentation and how to fix it. In: Elhauge E, ed. The Fragmentation of U.S. Health Care: Causes and Solutions. New York, NY: Oxford University Press; 2010:1-20. 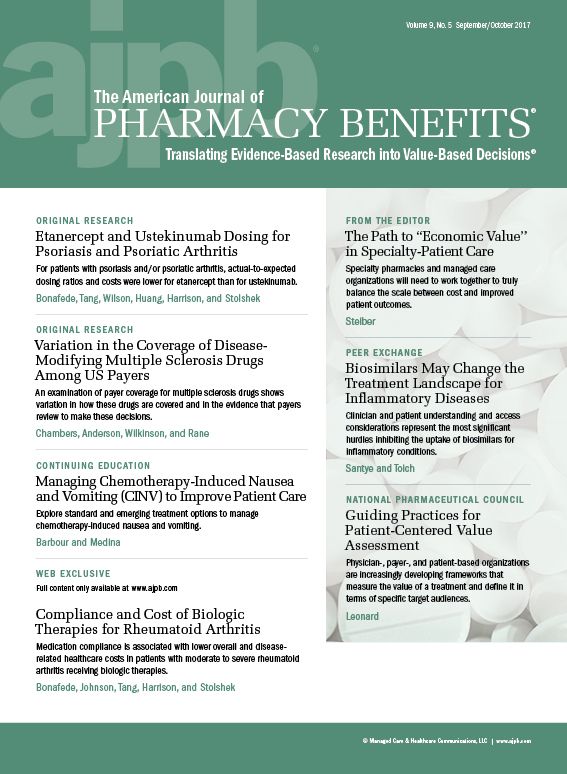