What constipation remedy did Lewis and Clark take on their famed expedition?

What constipation remedy did Lewis and Clark take on their famed expedition? 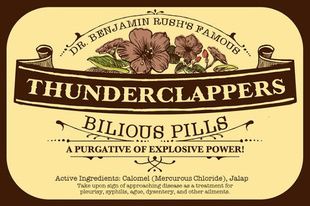 Dr. Benjamin Rush was a signer of the US Declaration of Independence and a physician in Philadelphia. He was also known for creating Dr. Rush’s Bilious Pills, which were a combination of calomel, chlorine, and jalap (an herbal laxative). These pills were fondly referred to at the time as “thunderbolts” or “thunderclappers.”

Rush recommended that Lewis and Clark take a supply of thunderclappers on their upcoming expedition across the western United States following the Louisiana Purchase in 1803. Rush wrote that constipation “is often a sign of approaching disease,” so when they felt constipated, they should avoid disease and “take one or more of the purging pills.” Additionally, Rush noted that a lack of appetite “is a sign of approaching indisposition and it should be obviated by the same remedy.”

Due to these recommendations, Lewis and Clark brought 600 thunderclappers on their expedition.