On April 12, 2014, results of the COSMOS study were announced at the 49th Annual Meeting of the European Association for the Study of the Liver in London, England. The results of the phase II trial show 12-week functional cure rates in patients with hepatitis C receiving a combination of Gilead's sofosbuvir (Sovaldi) and Janssen's simeprevir (Olysio).

Patients enrolled in the trial received the 2 direct-acting antivirals with or without ribavirin. Overall, in a group of patients with genotype-1 hepatitis C virus (HCV) infection (including patients with liver fibrosis or cirrhosis), 93% of patients attained sustained virologic response 12 weeks after the end of treatment (SVR12), attaining a functional cure.

The first cohort included 80 patients who failed to achieve cure with prior therapy and had moderate or no fibrosis of the liver. The median age of patients enrolled in the first cohort was 56 years. Addition of ribavirin to the simeprevir/sofosbuvir combination treatment over a 12-week treatment period moderately increased the rate of SVR12 from 93% to 96%.

The 87 patients in the second cohort included those who had not received prior therapy, those who had failed to achieve cure with prior therapy, and those with advanced fibrosis or compensated cirrhosis. The median age in the second cohort was 58 years. In these harder-to-treat patients, about half failed to achieve functional cure with prior therapy, and more than three-fourths (79%) had an unfavorable mutation (the non-CC IL28B variant). Almost half of the patients (47%) had compensated cirrhosis.

In the trial, 4 serious adverse events occurred—1 of which resulted in discontinuation of treatment. Fatigue, headache and nausea were the most common adverse events in the clinical trials.

According to investigators, there was no clear advantage of using triple therapy with ribavirin over double therapy with simeprevir/sofosbuvir. Regardless of liver fibrosis scores, presence or absence of cirrhosis, or prior treatment, rates of SVR12 were high—exceeding 90%.

In a press release, lead investigator and Medical Director at The Texas Liver Institute and Professor of Medicine at University of Texas Health Science Center Eric Lawitz, MD, stated, “The combination of simeprevir and sofosbuvir demonstrated efficacy, including in patients with more advanced liver fibrosis.” Lawitz continued, “I look forward to seeing the results of the recently announced Phase 3 OPTIMIST trials, which will further evaluate simeprevir and sofosbuvir without interferon or ribavirin.” 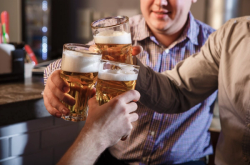