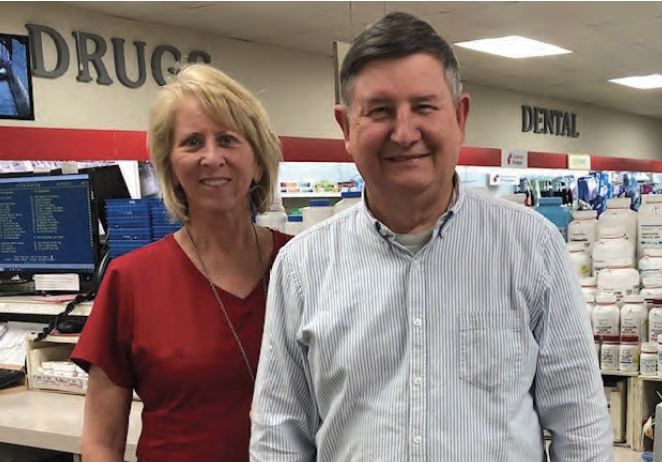 George B. Launius, RPh, and his wife, Nancy Launius, (shown at right) are the proud owners of Thrifty Mac Pharmacy in Madison, Georgia.

Thrifty Mac opened in 1976 and was owned by friends of George, who worked at another local, independent pharmacy. Coming from a family of small-business owners, George, a 1975 graduate of the University of Georgia College of Pharmacy, knew he wanted to own a pharmacy and understood what it took to be successful. In 1978, he purchased Thrifty Mac.

Thrifty Mac also offers a few uncommon items and services. “We have 2 departments that I can honestly say almost no pharmacy in the world has,” George said, explaining that Thrifty Mac sells Big Green Egg smoker grills and rents out table linens for parties and weddings.

Like most independents, superior service is of the utmost importance.

“We make sure we hire the friendliest staff possible. We greet every patient as soon as they walk in the store,” George said.

Because of its renowned service, Thrifty Mac’s employees are well known in the community.

“With our friendly staff and fast service, we rarely fall behind in our work,” George said. “And we can fill a new prescription in less than 10 minutes.”

Thrifty Mac is also the only pharmacy in the town with a drive-through window.

With a rapidly growing volume, George knew he needed to increase efficiency.

“We looked at all the technology on the market, but after studying our workflow, we realized our [technicians] were spending too much time going to and from the shelves,” he said. “We decided to try to find a way to put the most used medications within arms’ reach of the dispensing counter.”

That is when George got creative and constructed a comprehensive filling station.

“Our main dispensing station has the 300 fastest movers within arms’ reach. We call this our $50 robot because it cost me only $50 to make,” George said.

The shelf sits on the main counter and holds more than 200 fast movers. Drawers under the counter hold approximately 100 more drugs.

“Our techs can fill over 70% of our prescriptions without moving away from this counter,” he said. Extra stock is located just behind the techs.

Were the changes well received? One could say that. According to George, the techs’ reaction to this workspace design was, “What took you so long to think of this amazing idea?”
The staff also adjusted the workflow to make the final verification process more efficient. The Eyecon machine sits on the main counter, and the Kirby Lester is on the second counter.

To reward their “amazing, hardworking staff” and build team morale, Nancy came up with a great idea: a yearly weekend trip to a surprise destination. The first year was to New York, New York, “which was a big hit, since most of our staff had never flown and no one had been to [New York City] before,” George said.

While there, the group saw The Lion King on Broadway; visited ground zero for the September 11, 2001, attacks, the 9/11 Memorial & Museum, and the Statue of Liberty; and explored Times Square. Their second trip took them to Nashville, Tennessee, where they visited the Country Music Hall of Fame and Museum and the Grand Ole Opry.

“Needless to say, the joke around our small town is that everyone wants to work at our store now,” George said.

The business also sponsors local charities and sports teams, and George participates in mission trips. During his most recent mission trip to Haiti, George and his group put a roof on a remote medical clinic that serves the area’s villages.

George and Nancy have been married for 44 years and have 3 children and 4 grandchildren. In their spare time, they enjoy outdoor activities, family and friends, and worldwide travel.
Karen Berger, PharmD, is a pharmacist at an independent pharmacy in northern New Jersey.
69320
Thrifty Mac Pharmacy Delights Patients and Staff
Georgia pharmacy offers cutting-edge technology compliance packaging, sells charcoal grills, and rents out table linens for weddings.
/publications/issue/2020/december2020/thrifty-mac-pharmacy-delights-patients-and-staff