Pharmacy Focuses on Family, Technology
2019-02-21 20:00:00
Karen Berger, PharmD
For Virginia “Jenny” Koslow, PharmD, pharmacy runs strong in her family. Her father, Ralph Dales, has been a pharmacist for more than 40 years. In 1979, he opened a pharmacy in his hometown, and his wife (Jenny’s mom) worked there as a technician. Although Dales loved independent pharmacy, because of finances, he had to close the pharmacy 5 years later and work in various independents and then a chain. In April 1999, Dales was delighted to return to his true calling and opened Scottie Pharmacy in Richlands, Virginia.

Scottie Pharmacy has been around since the 1970s. The original small local chain in southwest Virginia was sold to CVS. “Being a thrifty person, my father opened his pharmacy in one of the previous Scottie Pharmacy locations,” Koslow said. “The sign was still there; he just opened under the same name.”

Koslow originally had no intention of pursuing pharmacy as a career. She graduated from the University of Alabama in Huntsville with a bachelor of science degree in biology, and her career was in environmental science. After 10 years, Koslow decided she wanted to raise her children in a smaller community and have a career where she could help people. In 2011, she enrolled at the Appalachian College of Pharmacy and has worked at Scottie Pharmacy since her graduation. Koslow is now the pharmacist in charge.

Although he is retired, her father still has a strong presence at the pharmacy, stopping by daily to check on everything and “most importantly, talk to the patients,” she said.

Dales has patients who have followed him for more than 30 years. “My dad’s relationship with his customers is what sets us apart from other pharmacies,” Koslow said.

A patient once came to the pharmacy and gave her $50, telling her it was for Dales. She asked him what to do with it, and Dales told her to put it in an envelope in a drawer. He later explained that the patient was on a fixed income and often asked to borrow $50. Dales gladly lent it to her, and every time she paid it back, he kept it for next time, time and time again, until she passed away.

Another time, a man came into the pharmacy, asking for gas money. Dales was not sure the money was really for gas, but instead of saying no, he followed the man to the gas station and bought his gas.

Scottie Pharmacy truly is a family. Koslow’s aunt, Carolyn Lowe, CPhT, is a technician and has worked there since opening day. Her husband, Benjamin Koslow, MBA, is the office manager. All of the employees have been with the pharmacy for many years. 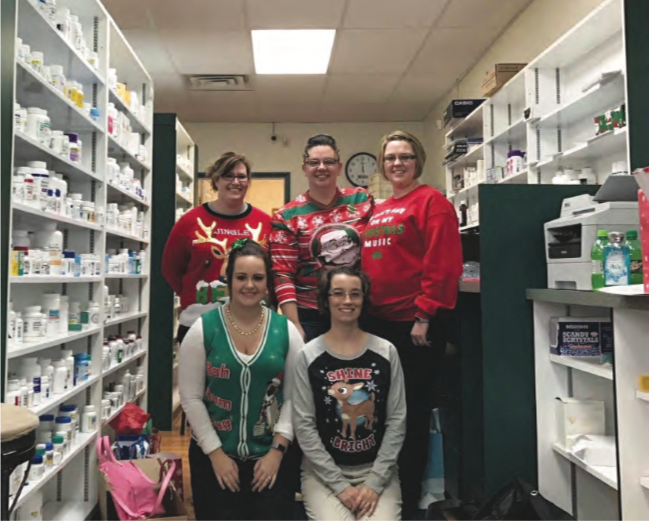 The pharmacy also focuses on using the best technology to ensure accuracy and safety. An Eyecon, a type of machine vision technology that helps with prescription filling and accuracy, is integrated into the software system. When a prescription is filled, information, such as the National Drug Code (NDC), prescription number, and quantity, is sent to Eyecon. The technician next scans the prescription label and the stock bottle. If the bottle is incorrect, Eyecon will not let the filling process continue until the correct one is scanned. The technician then pours the pills onto the tray and Eyecon counts them; when the correct quantity is on the tray, a green light comes on. For Class 2 prescriptions, or those that require extra care because of the potential for patients to intentionally or unintentionally abuse the drug, Eyecon requires a back count to verify perpetual inventory. Eyecon even assists pharmacists when they conduct a monthly Class 2 inventory: Eyecon is put into inventory mode, and the pharmacist has to just scan the bottle, pour the pills onto the tray, and wait for Eyecon to count and record the inventory.

Scottie Pharmacy also uses a ScriptPro robot to assist in accuracy and speed of prescription production. The robot contains the top 140 fastest-moving drugs. The prescription processing software is also linked to the robot, so accuracy is ensured by scanning the robot’s computer cell against the stock bottle. Every prescription that is entered is sent to the robot. If the NDC matches one that is in the machine, a robotic arm picks up a vial, counts the pills, and sends the product to the labeler for automated labeling. The technician then scans the vial and visually verifies the pill, using an image from the robot, before the vial is sent to the pharmacist for final verification.

Scottie Pharmacy also offers an application, available through the Apple or Google app store, called RxLocal. Patients use a customized mobile app or visit scottiepharmacy.com, where they can request refills. From there, the request appears in the priority filling queue. Patients love that they can create an account and even set reminders to take their medications. With the app, patients also can add family members to their account who can see the refill status. The app has been very helpful to patients, who also appreciate the text notification service Koslow set up.

A strong family foundation and keeping up with the latest pharmacy technology are sure to ensure Scottie Pharmacy’s continuing success.
Karen Berger, PharmD, is a pharmacist at an independent pharmacy in northern New Jersey.
38003
Pharmacy Focuses on Family, Technology
This independent is celebrating its 20th anniversary of serving patients in a southwest Virginia community.
/publications/issue/2019/February2019/pharmacy-focuses-on-family-technology