It has been estimated that CYP3A4 metabolizes about half of all drugs on the market. Since many other commonly used drugs are moderate to potent inhibitors of CYP3A4, it is not surprising that the drug toxicity of CYP3A4 substrates, due to inhi- bition of CYP3A4, is relatively common. CYP3A4 is also sensitive to enzyme induction, and a number of drugs are known to be CYP3A4 inducers.

CYP3A4 inducers tend to reduce plasma concen- trations of CYP3A4 substrates, resulting in reduced efficacy of the substrate. This type of drug interaction is probably more frequent than commonly realized, since a reduced drug effect may be attributed sim- ply to lack of patient response.

Many drugs that are CYP3A4 substrates, inhibitors, and inducers are also inhibitors or inducers of the ABC transport protein known as P-glycoprotein. Many drug interactions, therefore, involve additive effects of both CYP3A4 and P-glycoprotein.

CYP3A4 Substrates
Drugs metabolized by CYP3A4 are known as CYP3A4 substrates and are listed in Table 1. Keep in mind that many drugs are metabolized by more than one cyto- chrome P450 enzyme, and CYP3A4 may represent only 1 pathway. Unfortunately, many CYP3A4 substrates have substantial toxicity and some patients may develop severe toxicosis when CYP3A4 inhibitors are taken concurrently. A selected list of such interactions appears in Table 2. 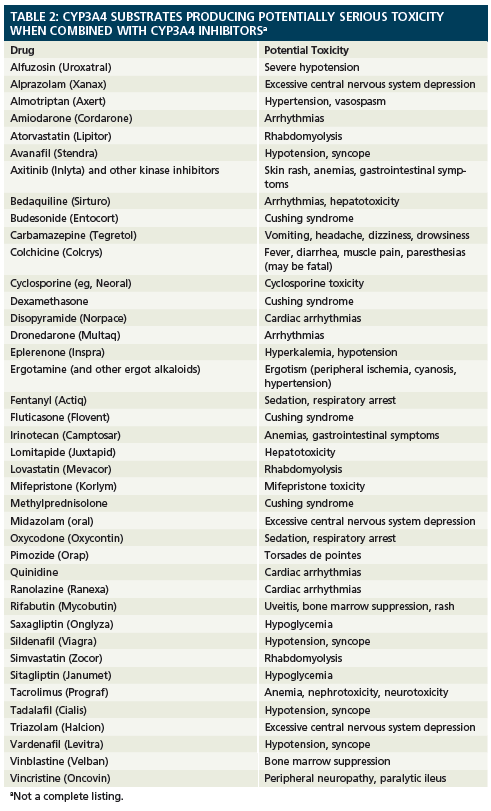 CYP3A4 Inhibitors
Drugs that inhibit CYP3A4 activity (Table 3) will usually inhibit the metabolism and increase the plasma concentrations of the CYP3A4 substrate medications listed in Table 1. Some drugs, such as clarithromy- cin, itraconazole, ketoconazole, nefazo- done, nelfinavir, and ritonavir, are particu- larly potent inhibitors of CYP3A4; patients on these drugs may have markedly reduced CYP3A4 activity. 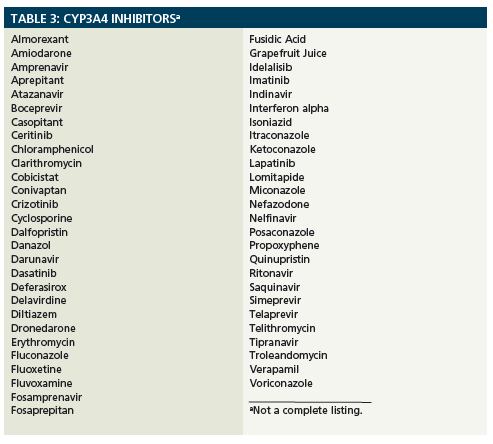 CYP3A4 Inducers
Drugs that induce (increase) activity of CYP3A4 are listed in Table 4. Note that the CYP3A4 enzyme is especially susceptible to enzyme inducers, and marked reductions in the plasma concentrations of CYP3A4 substrates (listed in Table 1) may occur. For example, a patient taking the potent CYP3A4 inducer rifampin may have a roughly 90% reduction in serum concen- trations of CYP3A4 substrates, such as buspirone, triazolam, and verapamil. 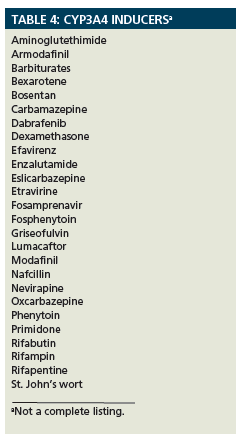 Summary
CYP3A4 is the most important of the CYP450 enzymes for drug metabolism and for drug interactions. It is not practi- cal to try to memorize the many CYP3A4 substrates, but it would be prudent to be familiar with the most common CYP3A4 inhibitors and inducers since such drugs are likely to interact with approximately half of all drugs on the market.