Clinical Considerations for SAM-e Use in Helping to Support a Healthy Mood
2014-06-18 04:00:00
This article was sponsored by Pharmavite.

Approximately 1 in 5 individuals experiences a mood disorder at some point in their lifetime, and the prevalence among women is 50% greater than among men.1 Many individuals experiencing a mood disorder are either untrea-ted or undertreated.2,3 Consumers may be unaware of dietary supplement options, such as S-adenosyl-L-methionine (SAM-e), that can help support a healthy mood. Several clinical studies have demonstrated the effectiveness of SAM-e in helping to reduce the symptoms of depression.4 Pharmacists can help consumers understand the risks and benefits associated with using SAM-e to help support a healthy mood. Pharmacists should advise patients to consult with their physician regarding the use of dietary supplements, as it is important to understand dosing and any potential interactions with other medications.


About SAM-e
SAM-e is a naturally occurring compound produced within the human body from the essential sulfer-containing amino acid methionine and adenosine triphosphate (Figure).5 The typical adult’s daily diet contains 1.2 to 1.5 grams of methionine, approximately half of which is converted to SAM-e in the liver by normal biochemical processes.6,7 Once it is formed, SAM-e functions in several important biochemical reactions, including the synthesis of DNA, phospholipids, proteins, and neurotransmitters.5 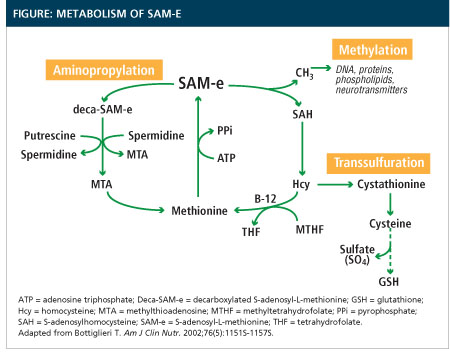 As a supplement, SAM-e has been commercially available in Europe since the late 1970s. In the United States, SAM-e has been available over the counter as a dietary supplement since 1999.5 It is important to note that SAM-e supplements are not all alike. Proper formulation of SAM-e is important due to the rapid metabolism, low bioavailability, and chemical instability of the molecule. These issues pose drug delivery and storage challenges for manufacturers. Mindful of these concerns, some manufacturers formulate SAM-e in enteric-coated tablets to improve oral delivery of SAM-e, and/or package SAM-e tablets in sealed blister packs to improve the product’s shelf stability.8-10 Due to the lack of stability of the SAM-e molecule alone, commercial products contain a counterion to help stabilize the compound (eg, tosylate).11 The dose listed on SAM-e supplements may or may not include the molecular weight of this stabilizing compound, which can be misleading. For example, if the manufacturer included the weight of the tosylate in the reported dose, a 200-mg tablet of SAM-e tosylate disulfate would include approximately 100 mg of SAM-e; however, if the manufacturer did not include the weight of the tosylate in the dose, the reported dose would reflect the total amount of SAM-e.12


Efficacy of SAM-e
Data from several studies have demonstrated the efficacy of the dietary supplement SAM-e. The Agency for Healthcare Research and Quality (AHRQ) conducted a meta-analysis to assess the efficacy of SAM-e in several conditions, including depression. Using data from 25 biomedical databases, the researchers identified 39 studies supporting the efficacy of SAM-e in depression, selecting 28 studies with the highest quality of evidence for inclusion in the meta-analysis. Based on the analysis, the AHRQ found that SAM-e demonstrated both statistically and clinically significant efficacy in lowering Hamilton Depression Rating Scale (HAM-D) scores. Compared with placebo, 3 weeks of treatment with SAM-e resulted in a significantly greater reduction in HAM-D scores of nearly 6 points (95% confidence interval [CI], 2.2-9.0).4

SAM-e has also shown efficacy as adjunctive therapy. Papakostas et al conducted a single-center, randomized, double-blind, placebo-controlled trial to evaluate the efficacy, safety, and tolerability of adjunctive SAM-e among patients whose major depressive disorder had not responded to SRI treatment. Enrolled participants met requirements for age, DSM-IV diagnosis, HAM-D score, and current SRI use. During the 6-week treatment period, patients received a stable dose of an SRI with either adjunctive SAM-e or placebo. The SRI dose remained constant; the dose of SAM-e was increased from 400 mg twice daily to 800 mg twice daily after the first 2 weeks of treatment. Response was defined as a 50% or greater reduction in HAM-D scores, and remission was defined as a HAM-D score less than or equal to 7 or a Clinical Global Impression score of 1. Adjunctive SAM-e improved the likelihood of response (P = .01) and improved the likelihood of remission (P = .02) (Table).13 The incidence of adverse events was similar in the SAM-e and placebo groups.13

The Papakostas study was included in a 2014 meta-analysis by Turner et al, which examined the efficacy of the supplement SAM-e and other adjunctive treatments in patients who have not had an adequate reduction in symptoms of depression with antidepressant treatment. Out of nearly 9000 articles identified, 7 studies met methodological criteria for inclusion in the meta-analysis (1 comparing SAM-e add-on vs placebo, 2 comparing add-on lithium vs placebo, 1 comparing add-on mianserin vs placebo, 1 comparing add-on mirtazapine vs placebo, and 2 comparing add-on extended release quetiapine fumarate vs placebo). Key outcome measures extracted from each study included HAM-D scores and the Montgomery Asberg Depression Rating Scale of depression severity. The results showed that SAM-e as add-on treatment more than doubled the likelihood of response to conventional antidepressant treatment (risk ratio [RR], 2.62; 95% CI, 1.17-5.83; P = .02). Indirect comparison with the other agents in the study demonstrated that SAM-e provided an RR similar to that of other antidepressants.14


Role of the Pharmacist
When counseling patients with mood disorders, pharmacists should be aware of the OTC availability of SAM-e and its efficacy in helping to support a healthy mood. It is important for pharmacists to be able to explain the benefits and risks associated with SAM-e use when making recommendations regarding dietary supplements.
Side effects are generally mild. The most common side effects include anxiety, headache, urinary frequency, pruritus, nausea, diarrhea, and mild constipation.11,15 Patients who are pregnant or nursing or who are taking a prescription antidepressant should consult their physician before taking SAM-e. Patients who have bipolar disorder should not take SAM-e except under a physician’s supervision, as its use has been associated with episodes of euphoria and mania.9,15 Pharmacists should counsel patients using SAM-e regarding the potential for an increase in the risk of serotonin syndrome with concomitant use of SAM-e and some psychiatric medications (eg, tricyclic antidepressants).15
At daily doses between 200 mg and 1600 mg, SAM-e has been shown to be safe and effective as monotherapy and as an adjunct to an SRI in clinical trials in patients who were diagnosed with depression.4,13 A typical regimen of SAM-e may begin with a 400-mg dose taken daily 30 minutes before breakfast; the daily dose may be increased every 5 to 7 days, as tolerated.9 It is important to read the label carefully to ascertain whether the listed dose for SAM-e includes the molecular weight of the stabilizing compound so that patients receive an appropriate dose of the active ingredient.