Top 200 Drugs of 2011
2012-07-10 04:00:00
Michael Bartholow, PharmD, CACP
An analysis of the top 200 drugs by prescriptions dispensed and total sales reveals key trends in today's pharmaceutical market.
Prescription drug sales in the United States in 2011 demonstrated both a continuation of recent market trends and important new developments in the treatment of several disease states.

Growth in spending has been slow over recent years, and 2011 was no exception. Total health care spending reached $320 billion, an increase of approximately $50 billion since 2006 and $125 billion since 2002.1,2 This represents an increase in nominal spending of 3.7%, which falls in line with the trend of annual growth of 5% or less since 2007. When adjusted for gross domestic product and population growth, this is a per capita increase of 0.5%. Factors contributing to the minimal growth in spending include declining volume growth, decreased spending on new drugs, and the continued shift from branded to generic products.1

Sales within 5 leading therapy areas accounted for nearly one-third of total spending in 2011.1 Oncologics accounted for $23.2 billion in spending, an increase of 4.2%. Respiratory agents grew by 8.8% to $21 billion, with anti-asthmatics accounting for two-thirds of class spending. Lipid regulators earned $20.1 billion, a 7.2% increase.1 Lipitor (atorvastatin) was the single largest earning source in this class, but nearly 60% of prescriptions were switched to a generic alternative when the patent expired in November 2011.1,3 Spending on antidiabetic agents reached $19.6 billion, up 10.7%. Antipsychotics garnered $18.2 billion in spending, although 2 top-performing agents in the class face patent loss: Zyprexa (olanzapine) in October 2011 and Seroquel (quetiapine) in early 2012.1,4 Spending increased significantly in several areas, including multiple sclerosis (22.5%), attention-deficit/hyperactivity disorder (ADHD) (17%), and non- HIV–targeting antivirals (14.8%).1

Overall medication utilization per capita declined, along with total office visits and non-emergency department hospital admissions. Medication use per person dropped by 1.1%, whereas prescription usage in the retail setting declined in 41 states, largely due to a reduction in chronic medication use.

Conversely, the number of emergency department admissions increased significantly in 2011, possibly as a consequence of the high number of long-term unemployed people without insurance. These trends demonstrate a shift from lowercost, nonemergency medical care towards more costly emergency care, which is likely to contribute to the rising overall costs of the US health care system.1

Alternatively, prescription use increased among individuals aged 19 to 25 years, “which coincides with the first full year of implementation of the provision of the ACA [Affordable Care Act] allowing individuals under 26 years ofage to remain on their parents’ health insurance.”1,5 Therapies with the largest increases among this age group included ADHD and antidepressants.1

Out-of-pocket medication spending fell for the first time on record, declining by approximately $1.8 billion in 2011. Patients insured by commercial thirdparty companies paid roughly 78% of the total out-of-pocket costs. The average copay was $10 or less for 75% of all retail prescriptions. Copays for branded products cost up to $40 on average, and although brands only accounted for about 18% of total prescription volume, they represented 46% of out-of-pocket costs. Use of copay coupons and vouchers increased as well, helping to offset some of the higher costs associated with branded products.

Total spending among Medicaid patients and commercially insured patients remained relatively flat compared with 2010; however, spending by Medicare Part D beneficiaries decreased from $11.5 billion to $9.7 billion. This is largely a result of the “donut-hole” subsidy provided by the ACA.1,5

Use of branded medications continued to decline, whereas generic alternatives grew to represent 80% of total prescriptions dispensed. Several key patent expirations contributed to a reduction of about $14.9 billion in spending on branded products.1 Major products affected by patent loss in 2011 include Lipitor, Advair Diskus (fluticasone propionate and salmeterol), Zyprexa, Levaquin (levofloxacin injection), and Concerta (methylphenidate). Each of these products had accounted for more than $1 billion in annual spending in the 12 months prior to their patent expiry.1,4

The total savings in health care costs attributed to patent expiries, known as the “patent dividend,” grew to $65.2 billion since 2007.1,5 This number does not fully reflect savings associated with patent expiries that occurred late in the year, and more adequately reflects savings from expiries that occurred in late 2010 and early 2011, including Lovenox (enoxaparin injection), Aricept (donepezil), and Effexor XR (venlafaxine hydrochloride).

Spending on branded medications represented 73% of total spending in the United States. Declining volume in brands resulted in a reduction of $5.6 billion in spending. This number was offset by a pricing increase of $18.5 billion, or an estimated $12.6 billion after adjusting for discounts and rebates. Spending on new brands (products available for less than 24 months) increased from $7.5 billion in 2009 to $12.2 billion in 2011.

Several key elements within the current political and economic climate of the United States will significantly influence the growth of medication spending over the next few years. The ACA, for instance, is a highly controversial law that has dramatically affected out-ofpocket spending, access to health care, and the brand/generic shift. Although the US Supreme Court ruled in favor of upholding the ACA, the debate will remain a central issue during the 2012 government elections.5,6 Likewise, the thus-far slow economic recovery, high unemployment levels, and limited access to affordable health insurance are closely tied to overall health care spending and will remain key variables in the drug sales market.1

Although 2011 showed promise with the introduction of many novel therapy options, manufacturers face growing pressure to find new products to offset the loss of top performers. “This is a sobering reversal for an industry that just a few years ago was the world’s most profitable business sector but is now under pressure to reinvent itself and shed its dependence on blockbuster drugs,” reported Doug Wilson of The New York Times.“7 And it casts a spotlight on the problems drug companies now face: a drought of big drug breakthroughs and research discoveries; pressure from insurers and the government to hold down prices; regulatory vigilance and government investigations; and thousands of layoffs in research and development.”7

But despite all obstacles, companies including Pfizer, Merck, Eli Lilly, and Teva posted higher-than-expected earnings for the first quarter of 2012, proving that growth is still possible in a tough market.3,8,9 It remains to be seen whether this growth can be sustained in the months ahead.


Click on the image below to download a printable PDF of the Top 200 Products of 2011 by Total Dollars: 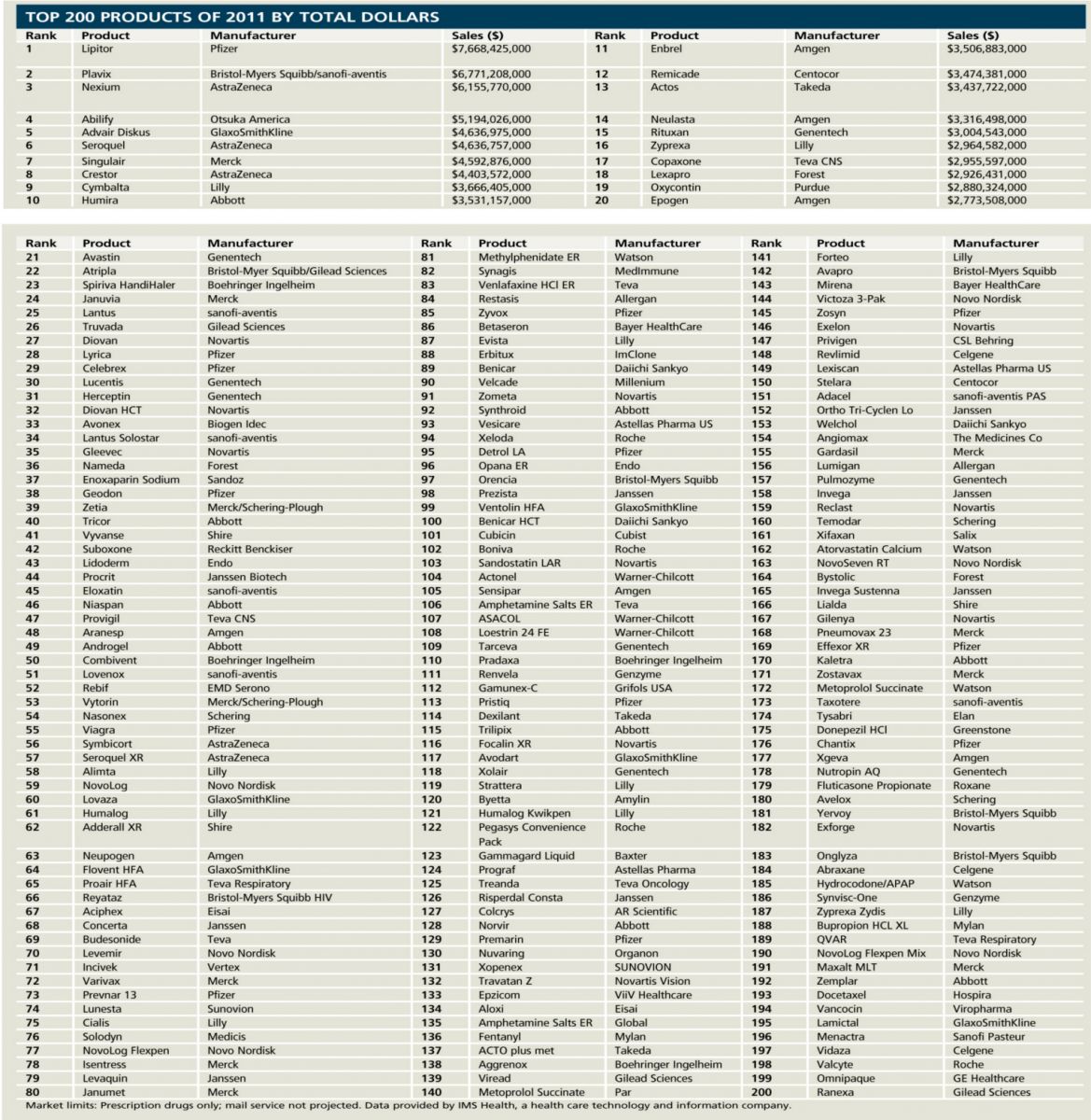 Click on the image below to download a printable PDF of the Top 200 Products of 2011 by Total Prescriptions: 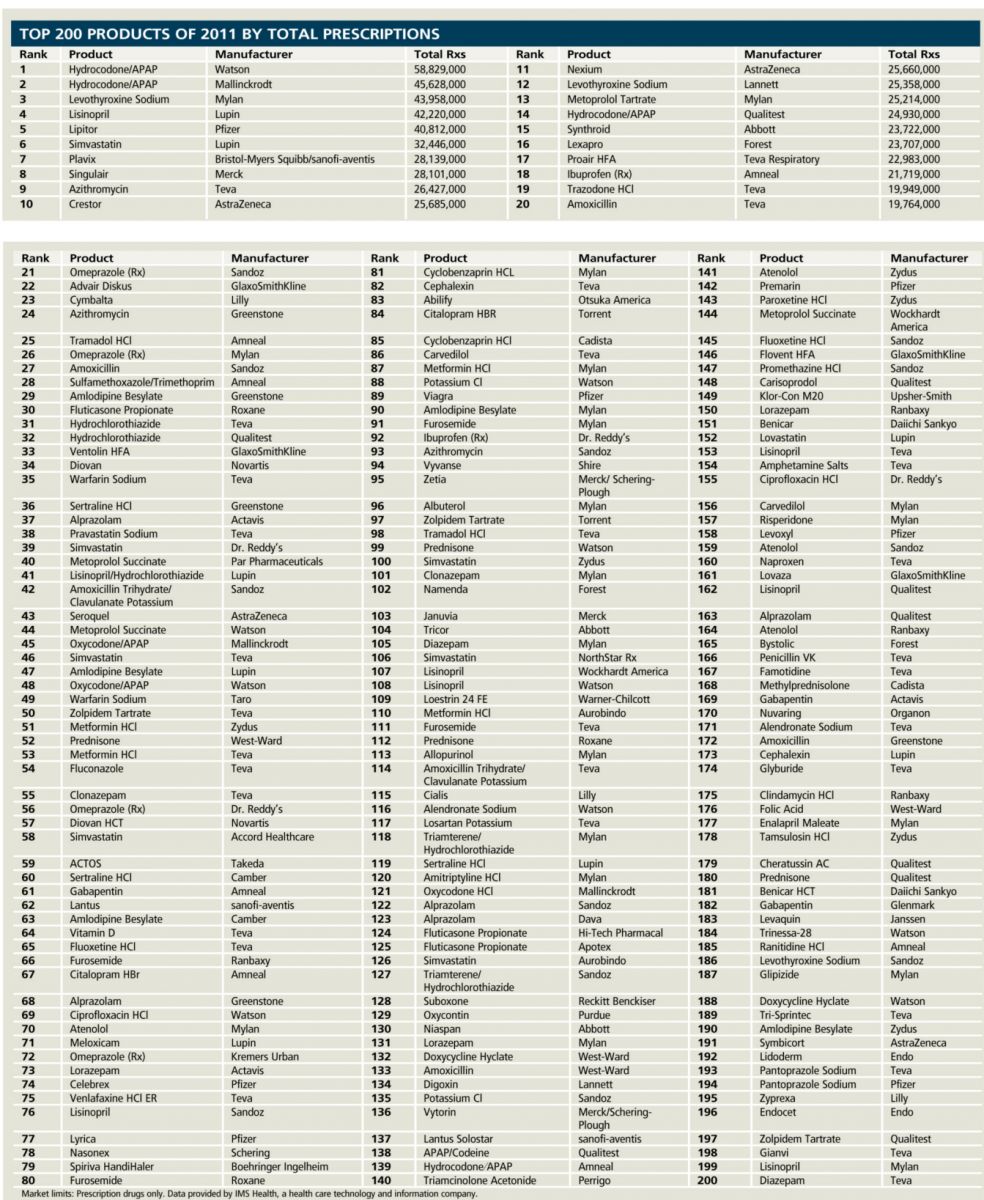