Lasers provide an intriguing new option for conditions that are difficult to treat with traditional drug therapy.

Many pharmacists are familiar with laser therapy’s success stories in dermatology—their use to remove growths, reduce redness, and remove tattoos is often nothing short of miraculous. Some new and investigational uses of lasers will interest pharmacists, especially because these new uses are tackling symptoms that have been notoriously difficult to address or inconvenient to treat with drugs in the past.

Lasers are now being used for many conditions that were traditionally treated with surgery and drugs. “Laser” is an acronym for light amplification by stimulated emission of radiation, and describes light beams from the electromagnetic spectrum. Unlike conventional light sources, laser beams are coherent (monodirectional—all waves synchronized), monochromatic (all wave lengths identical), and collimated (light waves all travel in the same direction in a parallel fashion). This provides focused energy that creates a small point of intense power.

Lasers are named by the element that is stimulated to create a beam of photons that can be reflected, scattered, absorbed, or transmitted to the surrounding tissues—so a YAG laser creates a beam from yttrium and its official name is Nd:YAG (neodymium-doped yttrium aluminium garnet) laser.1,2 Laser light can cut, cauterize, and destroy tissue very precisely. Lasers at lower powers can alter cellular function without heat and without destroying the target cell. This laser function, called “biostimulation,” can be harnessed to treat a variety of articular, neural, and soft tissue conditions, and it is under investigation in human conditions like aphthous ulcers, psoriasis, and post– myocardial infarction tissue repair.3-6 The range of conditions in which we use lasers is growing, and in many cases, these procedures are far less invasive than the traditional interventions they replace. They may also decrease or entirely eliminate the need for drug therapy in select cases.

Approximately 40% of patients and especially younger patients experience fogging or clouding of the new lens, a condition called “secondary cataract” or “posterior capsular haze,” within months to years. When this occurs, the ophthalmologist uses a specialized 2-minute procedure known as a YAG laser capsulotomy to defog the artificial lens and restore normal vision. A laser is used to create an opening in the clouded membrane. This costly but painless procedure is done under local anesthetic, and once complete, patients are usually sent home with no medication—no drops or analgesics. Risks include retinal detachment in approximately 2% of patients.7,8

Researchers postulate that the mechanism of action is reduction of ischemiadriven vascular endothelial growth factor production.8 Currently, this therapy is the standard of care for proliferative retinopathy, and it has been proved to reduce visual loss by as much as 50%.9,10 Regardless, it is associated with adverse events, mainly related to the laser’s destructive nature. Up to a quarter of patients experience difficulty with light-dark adaptation, and up to 10% experience a small decrease in visual acuity or peripheral visual loss (5%), which could impair night vision and affect driving.11 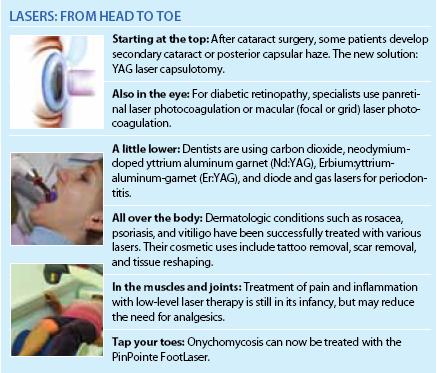 Toenail fungus is notoriously difficult to eradicate, and available drug treatments are costly and not without side effects and drug interactions. The FDA approved a laser treatment (the PinPointe FootLaser) in 2010 for the treatment of nail fungus (onychomycosis), and other laser treatments are being tested. This treatment is designed to be administered by a podiatrist in a 30-minute office visit, and involves directing a painless laser beam across the nail. The laser penetrates the nail bed without affecting the nail and surrounding tissue, specifically targeting fungi. The manufacturer’s clinical evidence demonstrated that after 1 treatment, 68% to 81% of patients experienced increased clear nail at 6 and 12 months and 81% of patients had sustained improvement at 12 months. (Note that the nail does not improve immediately; the deformed nail has to grow out.) Because this treatment lacks oral medication’s side effects, there is great interest in its utility and effectiveness. Because the procedure is considered aesthetic, health insurance does not yet cover the cost (approximately $1000 per treatment) and there is little long-term safety and effectiveness information available.12-15

Lasers have become valuable tools in dermatologists’ offices, having a wide range of applications. One application that will probably be of growing importance over time is tattoo removal, because approximately 25% of Americans younger than 30 years have at least 1 tattoo. Lasers rely on selective photothermolysis to remove tattoos with varying, but usually surprisingly good, results; the choice of laser depends on the colors in the tattoo.16,17

Excimer lasers have successfully improved psoriasis and vitiligo—so they are able to both remove pigment and stimulate pigment-producing cells. 18-22 Lasers are routinely used to improve redness, telangiectasia (chronic capillary dilation), and skin texture in acne rosacea patients, and are also used as surgical instruments to remove cosmetically deforming rhinophyma associated with rosacea of long duration and severity.23-25

Plaque-induced periodontal diseases are leading causes of tooth loss. Traditional treatment has been mechanical root planing and scaling to remove calculus. Since the mid 1980s, dentists have been experimenting with carbon dioxide, Nd:YAG, and Erbium:yttrium-aluminum-garnet (Er:YAG), and diode and gas lasers for periodontitis. All over the body: Dermatologic conditions such as rosacea, psoriasis, and vitiligo have been successfully treated with various lasers. Their cosmetic uses include tattoo removal, scar removal, and tissue reshaping. In the muscles and joints: Treatment of pain and inflammation with low-level laser therapy is still in its infancy, but may reduce the need for analgesics. Tap your toes: Onychomycosis can now be treated with the PinPointe FootLaser. Excimer lasers have successfully improved psoriasis and vitiligo— so they are able to both remove pigment and stimulate pigmentproducing cells. (Er:YAG), diode and gas lasers to find a less invasive approach to this problem. The theory is that lasers have tissue ablation, bacteriocidal, and detoxification properties, and photon scatter may stimulate surrounding cells to heal better. The search has been for a laser of an appropriate wavelength to remove calculus but avoid thermal damage to the pulp or tooth.26

Trials using Nd:YAG lasers have produced mixed results.27 It seems that calculus can be removed completely or partially without much damage to the root surface, but some studies report surface pitting, crater formation, thermal damage, and toxic by-product production. Better results have been achieved using an Er:YAG laser, a solid state laser with a wavelength more readily absorbed by water than others.28 Although using lasers to debride the root surface is quite new, it is impossible to determine if lasers remove some calculus and plaque as well as hand or ultrasonic instrumentation.29 As in some other laser applications, their relatively high cost may be a barrier to use in treating periodontitis at this time.

Treatment of pain and inflammation with low-level laser therapy (LLLT) remains controversial, but is currently conducted in human and veterinary medical settings. Its use is increasingly becoming more mainstream. Based again on the theory that LLLT is a biostimulator, LLLT uses lowlevel lasers or light-emitting diodes to alter cellular function.30,31 Photobiomodulation seems to occur when mitochondria, as photoreceptors, generate increased adenosine triphosphate, reactive oxygen species, intracellular calcium, and nitric oxide, or when LLLT alters levels of cytokines.31 LLLT’s effects seem to be dependent on a specific set of wavelengths, so expertise in LLLT treatment is essential.32-34 To date, there is same evidence that LLLT may be effective to relieve acute pain and inflammation in various situations. Lasers are also being used for both wound healing and improvement or revision of scars consequent to wounds or acne.35,36

Lasers were discovered only 50 years ago, and they have revolutionized many areas of science. In medicine, lasers have become essential tools in dermatology, angioplasty, cancer diagnosis and treatment, and ophthalmology. Over the next few years, newer and more specific lasers will become available for indications we only imagined in the last century. These new uses will change the way the interdisciplinary team practices, and improve quality of life for many patients. PT

14. Robb-Nicholson C. By the way, doctor. I’ve tried a lot of things for a fungal infection in one of my toenails, but it just won't go away. what do you know about a new treatment that uses laser? Harv Womens Health Watch. 2010;17:8.

1180
Lasers from Head to Toe: Will New Procedures Change the Face of Pharmacy?
Lasers provide an intriguing new option for conditions that are difficult to treat with traditional drug therapy.
/publications/issue/2011/May2011/Lasers-from-Head-to-Toe-Will-New-Procedures-Change-the-Face-of-Pharmacy-