Gout is a chronic, inflammatory form of arthritis that is increasing in prevalence in the United States. There are a variety of pharmacologic and nonpharmacologic options for treating and preventing flares of gout.

What is Gout?
Gout, also known as acute gouty arthritis, is a chronic, inflammatory form of arthritis that is increasing in prevalence. It has been reported to affect 3 to 6 million adults in the United States. The first gout attack (also referred to as a “flare”) usually occurs in men between the ages of 40 and 60 years, and in women after the age of 60. A single joint is usually involved; the most commonly affected joint is the big toe. Approximately 90% of patients with gout will experience an attack in this joint at some point. Although gout primarily involves joints located in the lower extremities, any joint may be affected.

Gout attacks typically occur suddenly with no warning. The affected joint can become hot, red, swollen, and tender within just a few hours. Some patients describe the pain as unbearable, even when so little as a sheet touches the joint, and severe attacks may last for hours to weeks. Once the attack subsides and symptoms are no longer present, patients usually do not experience pain until the next flare.

The Role of Uric Acid
Uric acid is a normal by-product of chemical reactions that break down purine, which is an important component of the amino acids found in proteins. Purine is found in food proteins and naturally occurring compounds in the body. Uric acid, under the right set of conditions, can form sharp, jagged crystals within joint spaces. In most cases, this occurs when the amount of uric acid in the blood is higher than normal (a condition called hyperuricemia), but it can occur even when uric acid levels are normal. Once crystals form in the joint, they irritate the surrounding tissue, causing inflammation as the body attempts to remove the irritation. This natural defense mechanism results in the symptoms of swelling, redness, and severe pain in and around the affected joint. Although these symptoms will resolve over time, this inflammation can damage the joint and will continue to cause damage even after the gout attack subsides. Therefore, it is very important to try to reduce recurrent attacks, as well as the duration of the attacks. 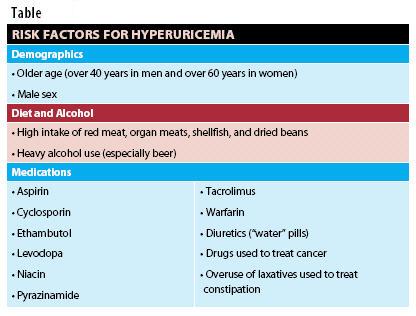 Diet and Lifestyle Changes in Gout Treatment
Lowering the amount of uric acid in the blood is key to reducing the risk of a flare. This may be accomplished by addressing modifiable risk factors, such as diet. For example, a diet low in purine may be beneficial. Foods such as red meat and shellfish have been shown to cause increases in uric acid levels, while low-fat dairy products have been shown to reduce uric acid levels. Alcohol also plays a role in raising uric acid levels; heavy beer drinkers are at greater risk for an attack than those who drink wine. While the type of food in our diet plays an important part in preventing an attack, being overweight has also been identified as a risk factor. Therefore, patients should not only monitor the type of food they eat, but also use portion control and exercise to maintain a healthy weight.

Treating an Acute Gout Attack
The treatment goal during an acute attack is to stop a sudden attack as soon and as gently as possible. During an acute gout attack, the purpose of treatment is to control inflammation caused by uric acid crystals (also called urate crystals) and to manage the pain associated with this inflammation. Medications available to control pain and inflammation include nonsteroidal anti-inflammatory drugs (NSAIDs), colchicine, and corticosteroids. The customary treatment of choice for an acute gout attack is an NSAID. Although indomethacin is the NSAID generally used, all NSAIDs (eg, naproxen, fenoprofen, ibuprofen, sulindac, piroxicam, ketoprofen, celecoxib) can be effective in treating a gout flare-up. Some patients, including those with heart failure, liver disease, ulcers, or improperly working kidneys, those taking medications called anticoagulants (eg, warfarin), and the elderly, cannot take NSAIDs.

One medication that can be used in place of NSAIDs for an acute attack is colchicine. Colchicine works by targeting the inflammation associated with gout. Unfortunately, high doses of this medication are associated with noticeable side effects such as nausea, vomiting, and diarrhea. Because of the severity of these side effects, some patients choose to stop using the medication. Colchicine works best when started as soon as possible (within the first 24 hours of an attack). Corticosteroids are another class of medication that can be used for gout flare-ups. This type of medication, like NSAIDs and colchicine, works by reducing inflammation in the joint. Corticosteroids can be given as a tablet that the patient swallows or as an injection (with the needle inserted directly into the affected joint). Corticosteroids are typically reserved for patients who cannot tolerate NSAIDs or colchicine, or those who cannot use such medications because they have a medical condition which prohibits their use. In addition to medications for an acute attack, application of ice to the affected joint may be helpful to reduce pain.

Treating Chronic Gout
In addition to lifestyle changes, medications play a vital role in gout treatment. There are 2 main classes of medication which lower uric acid levels, thereby reducing the risk of an attack. The first class of medications decreases the amount of uric acid that is produced in the body. These medications are called xanthine oxidase inhibitors, and they block the breakdown of purine into uric acid in the liver. The second class of medications, called uricosurics, increases the amount of uric acid eliminated from the body through the kidneys and urine. An important thing to remember when starting any of these medications is that they can cause an attack due to an abrupt change in uric acid levels. This is normal, and despite what appears to be a setback, the medications should not be discontinued. To minimize the risk of flare-ups, patients should continue treatment with any anti-inflammatory agents they use during acute attacks for at least 3 to 6 months after initiating maintenance medication.


This material was prepared by Pharmacy Times in collaboration with Takeda.

2218
Gout
Gout is a chronic, inflammatory form of arthritis that is increasing in prevalence in the United States. There are a variety of pharmacologic and nonpharmacologic options for treating and preventing flares of gout.
/publications/issue/2010/November2010/GoutPE