Reducing Rosacea's Redness
2010-05-11 05:54:41
Jeanette Y. Wick, RPh, MBA, FASCP
Rosacea, which is characterized by redness of the face, blushing, acne-like eruptions, and more, has several different treatment options based on the type of rosacea present. Return to normal skin is the primary treatment goal.
Rosacea—the disease that turns of an innocent blush into a raging flush on the convex areas of the face—is relapsing, remitting, and progressive. Its inflammation chronically affects up to 10% of the population. 1 Rosacea usually begins in adulthood with symptoms of sensitive skin, increased flushing, burning, and itching. Acne-like eruptions (papules, pustules, and erythematous plaques) may develop, although they are less likely to appear in darker-skinned people than in fair-skinned individuals.

With time, telangiectasias (arteriovenous malformations causing “spider veins”), ocular manifestations, dryness, and phymatous changes may develop. 2,3 Some patients develop symptoms on their necks, upper chests, and scalps; this type of rosacea is probably associated with sun exposure and damage. 4 A number of triggers have been associated with rosacea.5-7

Rosacea’s causes are poorly understood, but involve an inflammation in the vasculature and pilosebaceous units. In addition to its other symptoms, it leaves the skin sensitive to many topical agents and cosmetics.

Subtypes and Variants
• Erythematotelangiectatic rosacea (ETR) is associated with facial flushing for more than 10 minutes after exposure to stimuli. Common stimuli include emotional stress, hot drinks, spicy foods, exercise, alcoholic intake, and temperature changes.5-7 ETR’s erythema is most intense in the central portions of the face and absent in periocular areas. These patients generally find that many topical substances irritate, burn, or cause itching. Their skin is usually drier than the skin of other subtypes.

• Phymatous rosacea is characterized by the presence of phymata (solitary, coalescent lumps or benign growths) and marked skin thickening, especially on the nose (rhinophyma). Phymata can also develop on the chin, forehead, ears, or eyelids. In this type of rosacea, surgery is often necessary.8,9

• Ocular rosacea presents as a burning or itching sensation. Patients may be sensitive to light or feel like something is in their eyes. Blepharitis and conjunctivitis can co-occur and may eventually progress to keratitis, scleritis, or iritis.

• Among the less common variants are rosacea fulminans, granulomatous rosacea, and steroid rosacea. A severe form, rosacea fulminans presents with papules, nodules, and discharging cysts, and is sometimes associated with inflammatory bowel disease. Granulomatous rosacea, more prevalent in African Americans, generates firm nodules similar to those seen in cutaneous sarcoidosis and tuberculosis. Chronic use of topical steroids can also lead to rosacea. Steroids can improve rosacea’s signs and symptoms temporarily, but symptoms flare when topical steroids are withdrawn, creating a vicious cycle.1

Differential Diagnosis
Rosacea can be confused with acne vulgaris; telangiectasias are rosacea’s distinguishing feature. Seborrheic dermatitis often presents like rosacea, but unlike rosacea, it affects the periocular areas and may include greasy scaling. Other conditions that may be confused with rosacea are contact dermatitis, photodermatitis, and systemic diseases associated with facial flushing or eruption (like polycythemia vera, mastocytosis, superior vena cava syndrome, carcinoid syndrome, systemic lupus erythematosus, dermatomyositis, and mixed connective tissue disease).1

Treatment
Rosacea is currently incurable, and treatment success is measured as reduction in erythema and inflammatory lesions; decrease in the number, duration, and intensity of flares; and reduced itching, burning, and tenderness.

Metronidazole, the topical antibiotic/ anti-infective agent, is used most often and is generally well-tolerated. Topical clindamycin, erythromycin, and combination benzoyl peroxide-clindamycin may also be used, but are not FDAapproved for rosacea.10-12

Azelaic acid is a newer treatment. Its efficacy appears to be significantly greater than that of metronidazole for erythema and inflammation, but patients often find it irritating to the skin.13-15 The topical immunomodulators pimecrolimus and tacrolimus are being used, and pimecrolimus cleared rosacea in 50% of study subjects after 6 weeks in its pivotal trial, but another study could not replicate the findings.16,17 Both agents may produce a rare syndrome similar to steroid-induced acne.18

Erythema and flushing may be related to abnormalities in specific alpha-receptor genotypes. This suggests that topical alpha-agonist agents may help. The alpha-agonist oxymetazoline has been reported to reduce flares and inflammation in 2 case reports of patients with medication-resistant ETR.22

Oral Therapy
Tetracycline, doxycycline, and minocycline are the mainstay of oral treatment for rosacea.23 Azithromycin has also been beneficial and may be tolerated better than the tetracyclines when dosed 3 times a week.24,25 Based primarily on circumstantial evidence, some researchers have linked Helicobacter pylori to rosacea and used “triple therapy” (omeprazole and 2 of the following antibiotics: clarithromycin, amoxicillin, or metronidazole) successfully.26 Penicillin, erythromycin, amoxicillin, ampicillin, dapsone, and metronidazole have also been used orally when patients are resistant to or cannot use topical therapies and tetracyclines are contraindicated.27-31 Concurrent topical and oral antibiotics can be effective. Topical metronidazole 1% and oral doxycycline have been shown to be well-tolerated and to decrease lesion counts.32

Isotretinoin has strong anti-inflammatory effects and is particularly effective in younger adults and mild disease. It has also been shown to reduce phymatous changes.32 Other oral therapies that have been tried with varying degrees of success include spironolactone, prednisone, beta-blockers, ondansetron, and cyclooxygenase-2 inhibitors.33-35

Medication adherence is essential in this chronic disease, and pharmacists need to coach patients with rosacea to adhere closely to their therapy. Patients should be told about the importance of avoiding various types of makeup, as well as abstinence from alcohol, if either of those were factors in their particular disease processes.

Nonpharmacologic Interventions
Phototherapy or laser therapy has been shown to be useful for rosacea, reducing erythema and telangiectasias associated with rosacea.36,37 Restoration of normal skin, while not always possible, is a primary treatment goal. Patients need constant reminders about behavioral interventions, especially avoiding sun exposure and using sunscreen at all times. Avoiding triggers is also crucial, although it can be difficult for many patients. Patients should also identify and use moisturizers that feel comfortable on their skin.38 Kinetin, a plant cytokinin, has been shown to help restore the skin’s barrier and is available over-thecounter as a 0.1% lotion.39

Final Thought
Rosacea patients are often caught between the rock—needing topical medication to alleviate their distress— and the hard place—having skin that is so sensitive, many products cause more discomfort than they can tolerate. In this disease, as in so many others, patients may have to explore several treatment options before they find relief. Pharmacists should be aware that rosacea can be psychologically distressing, and complete relief may not be possible. â– 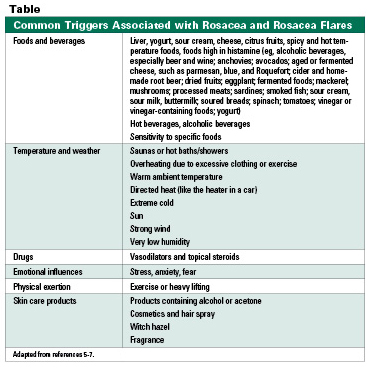 
1632
Reducing Rosacea's Redness
Rosacea, which is characterized by redness of the face, blushing, acne-like eruptions, and more, has several different treatment options based on the type of rosacea present. Return to normal skin is the primary treatment goal.
/publications/issue/2010/May2010/RxFocusRosacea-0510