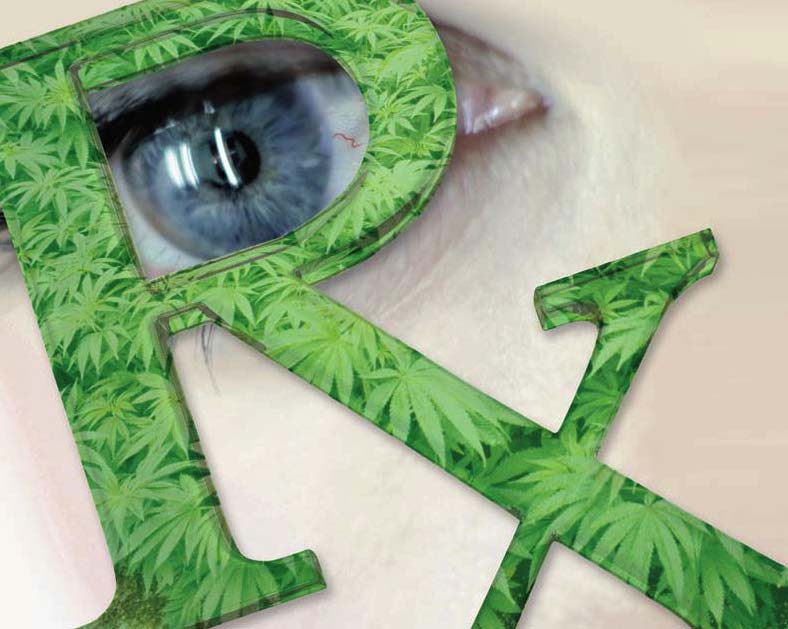 The Pioneer Patient
In 1972, an ophthalmologist told Robert C. Randall he would be blind in 5 years. Plagued with eyestrain for much of his adolescence, Randall, who was 24 at the time, was advised to go on disability and start learning Braille—he had glaucoma. In the months that followed, Randall tried every conceivable treatment option to ease his symptoms and stop the deterioration of his sight.

Several methods were successful at first, temporarily stabilizing his elevated intraocular pressure (IOP), which is the primary cause of vision impairment and loss in patients with glaucoma. As his tolerance to each treatment increased, however, so did his IOP.

To complicate matters, the drops prescribed by his ophthalmologist— earlier versions of today’s battalion of beta-blockers, prostaglandins, alphaadrenergic drops, cholinergic agents, and carbonic anhydrase inhibitors— came with a disconcerting side effect of blurred vision. Surgery was also ruled out, on the premise that it could result in immediate blindness.

One night, when Randall was smoking marijuana with a friend, he noticed a peculiar effect on his vision. Alice O’Leary, Randall’s lifelong companion and fellow medical marijuana advocate, described the discovery in a speech in 2006: “One night he looked out his apartment window at the streetlights and saw a telltale sign of the elevated eye pressures associated with glaucoma— halos around the lights. Turning away, he decided to forget his troubles and get stoned. Some time later, happily stoned, listening to music, he looked out his window again and immediately realized that the halos were gone.”

At the time, O’Leary was unconvinced. Randall himself thought it too good to be true. “Marijuana beneficial? A delicious thought perhaps, but nothing to hang your sight on,” he wrote of the moment in his memoir, Marijuana Rx. As time progressed, however, both recognized the drug as the only treatment that helped his condition.

Seeds of Change
In the spring of 1975, Randall began cultivating a medical marijuana garden on the back porch of his Washington, DC, apartment, successfully evading both blindness and legal recrimination.

The latter caught up with him in August, when Randall and O’Leary returned home from vacation to find that their plants had been seized by local law enforcement. The couple was asked to turn themselves in.

In the legal battles that transpired, Randall revealed a sense of purpose that would later prompt R. Keith Stroup, founder of the National Organization for the Reform of Marijuana Laws (NORML), to dub Randall “the father of the medical marijuana movement.”

He doggedly sought counsel from premier researchers in the field and subjected himself to countless clinical experiments. He wanted to prove in court the validity of his claim that marijuana was medically necessary to treat his glaucoma.

It was the research of Robert Hepler, MD, whose name is still mentioned today in reports of clinical trials on marijuana and glaucoma, that helped Randall take his defense to the next level. Dr. Hepler and his colleague, Ira R. Frank, MD, were the first to report that marijuana lowered IOP by 25% to 30% in a small number of patients, for a short period of time—about 3 to 4 hours. Their findings were published in a 1971 issue of the Journal of the American Medical Association.

In December 1975, Dr. Hepler confirmed Randall’s “armchair-medicine” hypothesis after 10 days of clinical experiments. During this time, they tried every available medication for glaucoma—including an oral form of delta-9-tetrahydrocannabinol, which is marijuana’s primary active ingredient— before adding inhaled marijuana to the experiment. Whereas conventional treatments failed to keep his IOP in check, smoking 8 to 10 marijuana cigarettes reduced it by approximately 35%, according to O’Leary.

With the help of his dedicated team of lawyers, Randall used this finding to argue—and eventually win—his case, which helped establish the legal concept of medical necessity. Not only was he acquitted of the charges against him for the possession of marijuana, he also convinced the federal government to provide him with a consistent, legal supply of the drug.

A new ophthalmologist was appointed by the National Eye Institute (NEI) and the National Institute on Drug Abuse to continue researching Randall’s case. Under these circumstances, he began receiving his first supplies from the government in November 1976.

Not surprisingly, the press was infatuated with the story, in part due to Randall’s willingness to speak freely on the subject without fear of persecution.

A 1979 report from the Wisconsin State Journal plays up the novelty of his circumstances: “Now Randall, who won a lawsuit to obtain legal marijuana, carries the marijuana cigarettes, prescribed for him by an eye doctor, in a brown plastic pill bottle bearing his name and the instruction, ‘Smoke as directed.’” 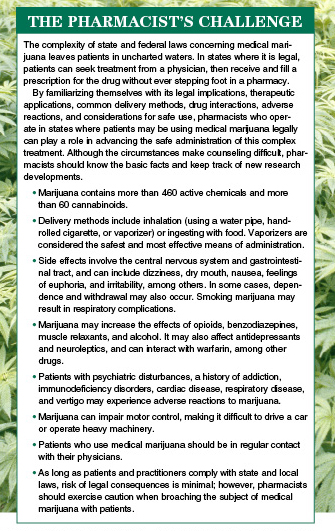 The Glaucoma Debate
At the time of Randall’s death from AIDS-related complications in 2001, 8 states had established some form of legislation allowing for the use of medical marijuana. Since then, more states have implemented “compassionate use” laws for marijuana, with Washington, DC, being the most recent to acknowledge its benefit for patients with certain chronic conditions.

All of the state laws list glaucoma as an approved condition, which seems to point to marijuana’s established reputation as a viable alternative treatment for glaucoma. Yet discrepancies persist for this condition.

Many national research and government health organizations—including the NEI, the Glaucoma Research Foundation (GRF), the American Glaucoma Society (AGS), and the American Academy of Ophthalmology (AOA)—argue that the current clinical evidence is insufficient to support marijuana as a legitimate treatment for glaucoma. On its Web site, GRF notes that most research on the topic (including the studies related to Randall’s case) was conducted “before some current medications with fewer side effects were available.”

In the same document, the foundation says there are currently “no [NEI] studies in the United States concerning the use of marijuana to treat glaucoma.” A different resource published by the AOA concedes that “studies sponsored by the federal [NEI] demonstrated that some derivatives of marijuana did result in lowering of intraocular pressure,” but that the treatment’s short duration and accompanying side effects render it inferior to “the wide variety of pharmaceutical agents now available.”

A decisive statement by AGS, written by Henry Jampel, MD, MHS, and issued in August 2009, maintains that even though lowering IOP is “the mainstay of treatment for glaucoma patients,” and “smoking marijuana lowers IOP,” the negative effects associated with longterm use are too strong to ignore.

According to Dr. Jampel, growing evidence suggests that low blood supply to the optic nerve contributes to glaucoma damage. If this is the case, low blood pressure—a known side effect of marijuana use—may cancel out the benefits of lowered IOP.

On behalf of AGS, Dr. Jampel does offer a glimmer of hope—the possibility that marijuana possesses certain “neuroprotective” qualities that offset damage to the optic nerve associated with glaucoma. Much more research would be needed to confirm such a benefit, however.

“Unless a well-tolerated formulation of a marijuana-related compound with a much longer duration of action is shown in rigorous clinical testing to reduce damage to the optic nerve and preserve vision,” Dr. Jampel argues, “there is no scientific basis for use of these agents in the treatment of glaucoma.”

Statements by the NEI also indicate a lack of clinical support, suggesting the discovery of marijuana’s side effects, coupled with the development of new medications for glaucoma, “may have led to diminished interest in this research area.”

More Research Needed
Although anecdotes from patients like Randall, who never lost his sight, offer inspiration to patients whose condition is resistant to conventional treatments, the consensus among leading glaucoma researchers appears unanimous: we need more studies.

In that sense, little has changed since Dr. Hepler and Randall first began their experiments. A report by Diane E. Hoffman and Ellen Weber, published in the April 2010 issue of the New England Journal of Medicine, highlights the main legal impediment to thorough, conclusive clinical research on medical marijuana in this millennium.

As long as marijuana remains a federally controlled substance, obtaining it for the purposes of scientific study will be a challenge, Hoffman and Weber argue. “Medical experts emphasize the need to reclassify marijuana as a Schedule II drug to facilitate rigorous scientific evaluation of the potential therapeutic benefits of cannabinoids and to determine the optimal dose and delivery route for conditions in which efficacy is established,” they wrote.

Until that happens, the authors say, “policymakers are grappling with questions that only scientific research can answer.” â–

2017
Medical Marijuana: Turning Over a New Leaf in Glaucoma Treatment?
Patients with glaucoma claim medical marijuana lowers elevated intraocular pressure, the primary cause of vision impairment and loss. Pharmacists can benefit from a thorough understanding of medical marijuana's history, legal complications, and pharmacologic profile as an alternative treatment for glaucoma.
/publications/issue/2010/May2010/MedMarijuanaGlaucoma-0510