Drug Interactions: Drug Interactions with St. John's Wort
2009-12-29 08:41:39
John R. Horn, PharmD, FCCP, and Philip D. Hansten, PharmD
Drs. Horn and Hansten are both professors of pharmacy at the University of Washington School of Pharmacy.
Five years ago in this column, we discussed the potential for St. John’s wort (SJW) to cause drug interactions. At that time, SJW had been identified as an inducer of cytochrome P450 3A4 (CYP3A4) and P-glycoprotein (P-gp). We discussed the interactions with alprazolam, oral contraceptives, and several antiretroviral drugs. In each case, SJW was shown to increase the metabolism of the object drug resulting in a reduction in efficacy. The information on SJW’s interaction potential has continued to develop, and this column is intended to bring you up to date.

SJW has been determined to be an inducer of several CYP450 enzymes, including CYP3A4, CYP2C9, and CYP2C19. In addition, SJW appears to induce several transporter proteins, including P-gp and organic anion transporters. Usually 10 to 14 days of SJW administration are required to produce the maximum effect on enzyme induction and a similar time to revert back to baseline following discontinuation of SJW. SJW, in a manner similar to rifampin, binds to the pregnane X receptor, resulting in stimulation of the genes that produce several cytochrome enzymes and transporters.

The primary constituent of SJW that causes the CYP450 induction appears to be the compound hyperforin. The Table lists several common drugs whose metabolism is known to be induced by SJW. Higher doses of SJW will produce a larger reduction in the plasma concentration of the object drugs. Although data may not be available for very many drugs that interact with SJW, one should consider that most substrates for CYP3A4, CYP2C19, CYP2C9. and P-gp will be affected to some degree by chronic SJW coadministration. 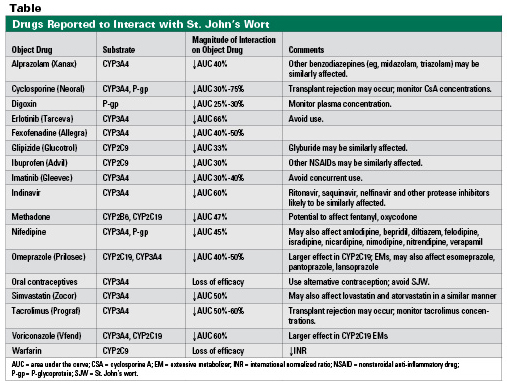 It appears that SJW can induce the activity of multiple CYP enzymes as well as drug transporters such as P-gp. One should be alert for reduced plasma concentrations and drug response with any drug that is metabolized by CYP3A4, CYP2C9, or CYP2C19, or transported by P-gp when it is coadministered with SJW.

Patients taking any drug that has a narrow therapeutic range and may be susceptible to SJW-induced metabolic induction should be monitored for loss of drug effect during SJW coadministration. If patients are taking SJW chronically, they may be at risk to develop increased concentrations of object drugs if they discontinue SJW without appropriate monitoring of the object drug. The antidepressant efficacy of SJW is modest at best; therefore, it would be prudent to counsel patients to avoid SJW if they are taking any other drugs. â–