Neonatal Abstinence Syndrome
2017-11-30 17:03:00
Belinda Sam, PharmD Candidate
In the past decade, the number of opioid and heroin addicts has increased significantly, and it continues to rise. Drug overdose is a leading cause of death in the United States. The number of unintentional deaths from prescription pain reliever overdose has quadrupled since 1999.1

The heroin and opioid epidemics even affect newborns. Cases of babies suffering from neonatal abstinence syndrome (NAS) increased 5-fold between 2000 and 2012 (online figure1). The increase in cases correlates to the rise in legitimate or recreational opioid use during pregnancy.2 This epidemic is truly devastating society’s most innocent population.

NAS’ duration and symptom severity vary depending on the substance used, when it was used, and when the mother delivers. Multiple organs are affected (table 14-6), and many conditions produce symptoms resembling NAS, making diagnosis difficult. It is heartbreaking to see babies experience symptoms that many recovering addicts compare to dying. NAS is a clinical diagnosis, but clinicians need urine or meconium analyses to confirm the diagnosis and identify the addictive substance.4 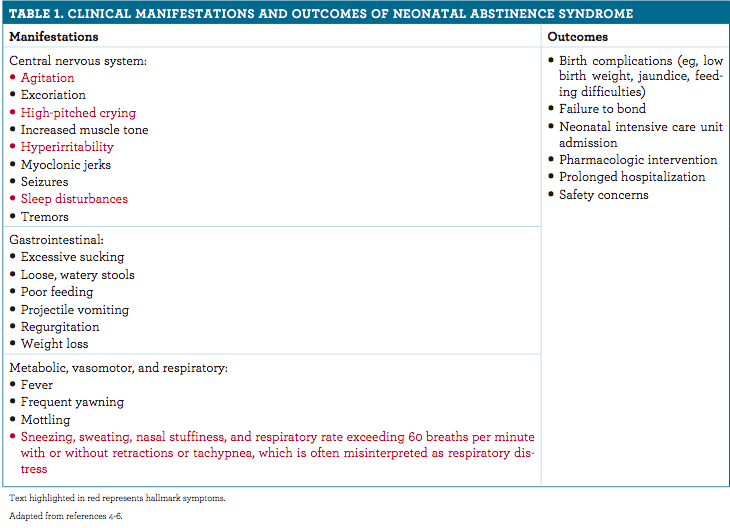 The average hospital stay for babies suffering from NAS is almost 7 times longer than it is for a normal newborn (online figure 11). Sometimes treatment takes months. Longer hospital stays and intensive care cost an average of $66,700 compared with $3500 normally, most of which is paid by Medicaid.2

If infants do not respond to supportive care, clinicians start pharmacologic interventions. Because of the withdrawal and the drugs’ unknown nature, no universally accepted standard of care for managing NAS exists. Online table 26-8 describes the common advantages and disadvantages of opioid replacement monotherapies. Clinicians can use benzodiazepines, buprenorphine, phenobarbital, and clonidine as adjuncts if monotherapy is insufficient. Clinicians use scoring systems, such as the modified Finnegan scoring system, to assess an infant’s progress. This helps determine the baby’s medication dose adjustments.6,7

Parents’ involvement in treatment is essential for their children’s recovery and normal, healthy development. Babies with NAS are harder to care for than normal babies. Their fussiness, difficulty sleeping and eating, and tight muscle tone make cuddling difficult. Bonding, a crucial component of a baby’s early development, can be especially hard. Babies whose parents are educated about nonphar- macologic methods of care tend to have the best outcomes after discharge.5

Many opioid-dependent women have unplanned pregnancies and don’t seek help for their addiction and its effects on their fetuses. They may fear being judged by others and a potential loss of custody. But if mothers don’t seek help, they are actually more likely to lose custody. Disclosing drug use, both prescription and illicit, during pregnancy allows providers to watch for the signs and symptoms of NAS and treat the infants appropriately.9,10

Sixteen states consider substance abuse during pregnancy to be child endangerment and a form of child abuse.10,11 In Michigan, hospital personnel must report suspected child endangerment to the Department of Health and Human Services. Once an incident is reported, the court places parents on probation, and they must comply with addiction rehabilitation or they risk permanently losing custody rights.12 This punitive atmosphere deters pregnant women from disclosing drug abuse or seeking help for their unborn children. Despite uncertainty about NAS’ long-term effects, studies have shown subtle problems that are not overwhelming.13

Clinician-supported detox for illicit drugs as opposed to cold turkey cessation is preferable. People make mistakes. Expectant mothers need to know that they have a chance to be better mothers by seeking help as soon as possible, even before pregnancy.

Media coverage tends to focus on opioid overdoses and addicts but not the epidemic’s effect on children and infants. Without coverage of these vulnerable victims, the opioid dependence cycle will continue and the epidemic will grow.

Seeing their suffering newborns, many parents want to become better parents and seek rehabilitation. Most are unaware of NAS until they are exposed to it. Educating young women and men about NAS can inform them about the consequences of illicit drug use and abuse before it is too late. Awareness posters and pamphlets about NAS should be displayed in doctors’ office waiting rooms. Posters displayed on billboards or on the street would make the public more aware, especially those people who rarely visit doctors.

NAS is difficult to treat, and many American hospitals lack protocols for the syndrome. Each case presents differently, and diagnosis relies on the mother’s complete drug use history. Fear often prevents mothers from seeking help or providing complete drug histories. Clinicians should work to reduce the stigma by assuring patients that they will not approach illicit drug use punitively. This is a public health issue, not a criminal one, and should be treated as such. A supportive atmosphere allows hos- pitals that have the funds to establish universal drug screening for all pregnant women.

The number of NAS cases has multiplied over the past 2 decades and continues to grow. Many hospitals in states with NAS epidemics establish specific neonatal intensive care units for patients. More studies are needed to help understand NAS’ long-term consequences and the best nonpharmacological and pharmacologic treatments. Some available data show that infants can live relatively normal lives after NAS.13
Belinda Sam is a 2019 PharmD candidate at the University of Connecticut.
References

11. Association of State and Territorial Health Officials. Neonatal abstinence syndrome: how states can help advance the knowledge base for primary prevention and best practices of care. astho.org/prevention/nas-neonatal-abstinence-report/. Published 2014. Accessed June 9, 2017.