Overall, pharmacy robberies are slightly down by 5% in total (812 in 2016 vs. 852 in 2015). The following charts list the states and localities and that also lists the net change in robberies from 2015.  Check your individual state’s year-to-year figures to see if robberies are increasing or decreasing: 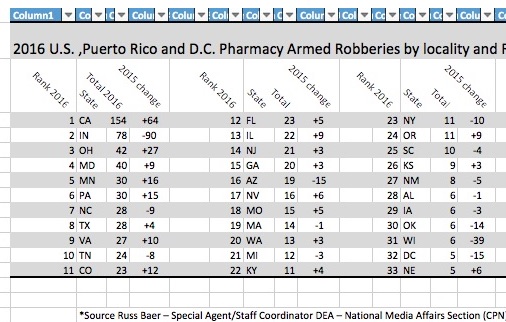 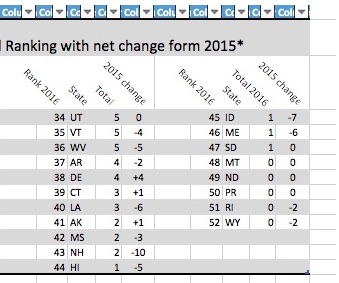 Most notable is the change in the state of Indiana, which led the nation in 2015 with 170 robberies. Indiana has long been a leading state for pharmacy robbery and saw a huge spike in robberies in 2015. Seventy-five percent of the 2015 losses were in Marion County (Indianapolis) and 87% were from the same retailer.  Much media attention was directed to reports that many of these robberies were committed by youth as young as 12 years old under the direction of adults.

According to this report from Fox News, in the fall of 2015, time-delayed opening narcotic safes were installed in approximately 150 Indianapolis area CVS stores and this resulted in a dramatic drop in robberies, as reflected in the chart above.

This robbery epidemic has the attention of the Indiana legislature (HB1312) and efforts are underway to lower the age limit for which youth may be charged as adults for these crimes. Other pending actions are directed at requiring time-delayed narcotic safes and silent alarms in pharmacies statewide but there is no final action as of this writing. The end result is that Indiana robberies decreased by 54% for 2016.

This would ordinarily be a welcome result; however, according to this published report, neighboring states seem to have had an uptick in robberies as criminals may be moving on to other states and the Indiana armed robbery count for 2016 (78) still lands them in the 2nd spot behind California (a state 3 times the size and population  of Indiana). Furthermore, Indiana still leads the nation in total for the most robberies (499) in the last 5 years!

Recommendations for Pharmacists, Pharmacy Workers
First and foremost, your primary robbery defense is your alarm and security system.  Criminals fear hard targets and the more advanced and visible your system is the better. Purdue Pharma and NADDI have produced a pharmacy security checklist and that I have also included in my book, Staring Down the Barrel. I strongly suggest you review this list with your employer, identify any weaknesses and create a corrective action plan.

Secondly, reach out to your local police. If you haven’t already, consider forming a Pharmacy Crime Watch (PCW) as a first step. Monitor what is going on in the pharmacy community. What type of fraud, forgery, or robbery events are ongoing and what techniques are in use?  Prepare for these and plan a response. Over time you can expand the sophistication of your PCW and become more involved in the process. Determine how police will respond to a 911 call for robbery, silent alarm or ambush alarm sent from your pharmacy. Are local police educated and prepared to pursue prescription fraud and forgery events. As noted below, this program has successfully curtailed robberies in South Bend, IN and at a time when robberies are at an all-time record high in the state.

What to Do in a Robbery Key Security and Alarm System Elements Together we can make a difference!  Reach out to your colleagues and police.

Ken Fagerman, RPh, MM, is a practicing hospital pharmacist and author of “Staring Down the Barrel: A Pharmacists’ Guide to Diversion and Coping with Robbery.”
34259
Recent Pharmacy Robbery Statistics
The latest Pharmacy Armed Robbery statistics for 2016 have been released by the Drug Enforcement Agency (DEA).
/news/recent-pharmacy-robbery-statistics