IACP cited Pharmacist’s Conscience Clauses, which allow pharmacists to refuse to offer certain services based on personal beliefs or values. The academy also took into consideration pharmaceutical companies’ judgement to restrict the sale of their products to the Department of Corrections, the press release noted.

“While the pharmacy profession recognizes an individual practitioner’s right to determine whether to dispense a medication based upon his or her personal, ethical, and religious beliefs, IACP discourages its members from participating in the preparation, dispensing, or distribution of compounded medications for use in legally authorized executions,” the academy’s board stated.

IACP called for a national discussion on whether pharmaceutical manufacturers should be able to restrict the use of certain FDA-approved drugs “only to purposes that adhere to their corporate values.”

The academy challenged compounding pharmacists to ask themselves certain questions when considering whether or not to be involved in a capital punishment case. IACP questioned the ramifications from a state board of pharmacy if a compounder knowingly prepares a drug that will cause harm. It also suggested that participation in compounding lethal drugs could potentially taint the pharmacy industry’s reputation, as capital punishment remains a controversial topic.

“Pharmacy, and compounding in particular, is a profession of healing and care that is focused on individual patients and providing the best and most appropriate medications at all times,” IACP’s press release stated.

Also pointing to the industry’s focus on healing, APhA’s House of Delegates approved a policy on March 30, 2015, recommending that pharmacists should not be involved in executions “on the basis that such activities are fundamentally contrary to the role of pharmacists as providers of health care.”

In a statement, APhA Executive Vice President and CEO Thomas E. Menighan, BSPharm, MBA, ScD (Hon), FAPhA, pointed out that the recommendation aligns with the stances of the American Medical Association, the American Nurses Association, and the American Board of Anesthesiology.

The association previously adopted policies that discouraged the use of the word “drug” for chemicals used in lethal injections and opposed laws that mandate or prohibit pharmacists’ involvement in executions.

APhA spokesperson Michelle Spinnler provided Pharmacy Times with a statement noting that it is ultimately in the hands of each pharmacist to decide whether he or she wants to participate in these activities. The statement also mentioned that the House of Delegates’ policy is not law, and there is enforcement jurisdiction related to the policy.

“Policies instead express the position of APhA and its members on various health care and pharmacy issues and are used to guide advocacy, education, and communication activities,” the statement read.

APhA’s first policy related to lethal injections was passed in 1985 and last reviewed in 2010. By 2013, however, the topic had become more relevant as the media paid more attention to issues with executions by lethal injection, so the APhA discussed it in its policy topic identification process in 2013. Prior to this most recent policy adoption, the association had spoken with advocacy groups such as SumofUs.

SumofUs started circulating a petition around July 2014 calling for pharmacists to stop providing the drugs for lethal injection cocktails. The petition, which garnered around 37,000 signatures, asked APhA to recommend to its members that they refrain from executions, so that capital punishment could be abolished. 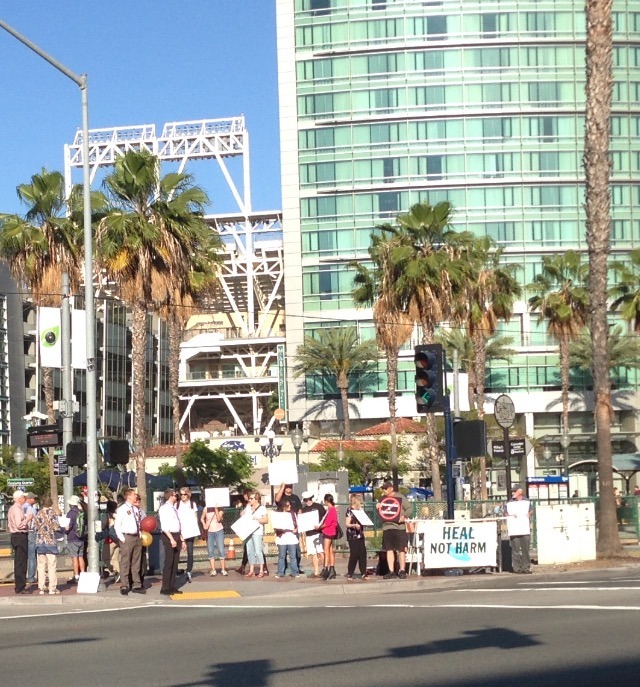 At the APhA 2015 annual meeting, in San Diego, California, a small group of protestors held signs outside the convention center denouncing pharmacists’ roles in executions prior to the association’s vote. One of the signs read, “Heal, not harm.”