Leaving the Anti-Vaccine Movement
2015-01-19 03:01:04
The anti-vaccine movement had me in its grips after the early birth of my first child in 2008. My son's lungs were not fully developed, and he needed to go to the NICU.

My husband and I had signed up for a "natural" childbirth class where we were taught that epidurals were evil and rupture of membranes did not require going to the hospital. We were also told to forgo the hepatitis B vaccine for our newborns because "babies don't have sex or do illicit drugs by injection." I am a hospital pharmacist, but I was falling for all of it.

Jenny McCarthy and Dr. Andrew Wakefield were regularly in the news concerning a connection between vaccines and autism, and I was fearful for my son. After all, Dr. Wakefield was a physician with a research paper in support of a connection between vaccines and autism. It was also a little bit popular to be anti-vax at the time.

Herd immunity is a form of immunity that results when the vaccination of a significant portion of the population provides a measure of protection for those who have not developed immunity. It disrupts the normal transmission of diseases covered by vaccination. However, the anti-vax movement directly compromises this immunity, resulting in less individuals becoming vaccinated and increases in diseases that were virtually eradicated.

Now, measles is on the rise. Dr. Mark Grabowsky, a health official with the United Nations, wrote last year in the Journal of the American Medical Association-Pediatrics that “Many measles outbreaks can be traced to people refusing to be vaccinated; a recent large measles outbreak was attributable to a church advocating the refusal of measles vaccination.”

Measles was once considered eradicated. For every 1000 children who have measles, 1 or 2 will die from it, and 1 will get brain swelling so severe that it can lead to convulsions and leave the child deaf or mentally impaired, according to the US Centers for Disease Control and Prevention (CDC).

In contrast, the fears parents have about vaccines' relation to autism continue to rise, even though the Wakefield study was proven false, Wakefield was stripped of his license to practice medicine, and numerous conflicts of interest surrounding his study were discovered.

Once upon a time, before vaccinations, nearly everyone in the United States got measles, and hundreds died from it each year. Today, most doctors have never seen a case of measles, but they keep popping up, with the latest outbreak starting in Disneyland.

And still, the anti-vax movement continues.

Mumps have also made a comeback. Before widespread vaccination, there were about 200,000 cases of mumps and 20 to 30 deaths reported each year in the United States. In some cases, mumps can lead to encephalitis and deafness. Herd immunity is important because the mumps vaccine is just 88% effective, which explains why someone who has been vaccinated can still contract the disease, as I did back in ninth grade from a foreign exchange student.

The CDC reports that the number of mumps cases has doubled in the past year, affecting more than 1000 individuals nationwide. 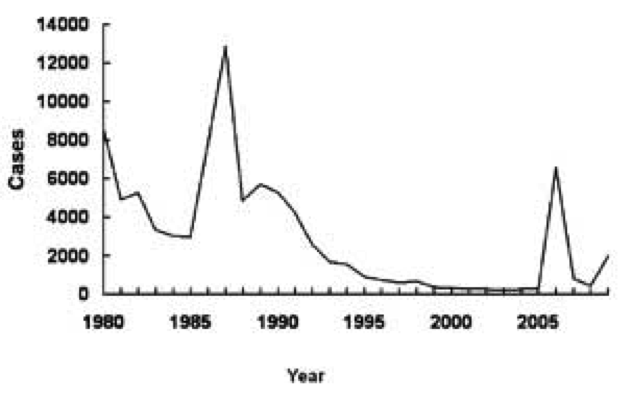 Pertussis, or whooping cough, was a universal disease in the pre-vaccination era that almost always was seen in children. Between 1940 and 1945, before widespread vaccination, as many as 147,000 cases of pertussis were reported in the United States each year, with approximately 8000 related deaths. It has been estimated that, at the beginning of the 20th century, as many as 5 of every 1000 children born in the United States died from pertussis. 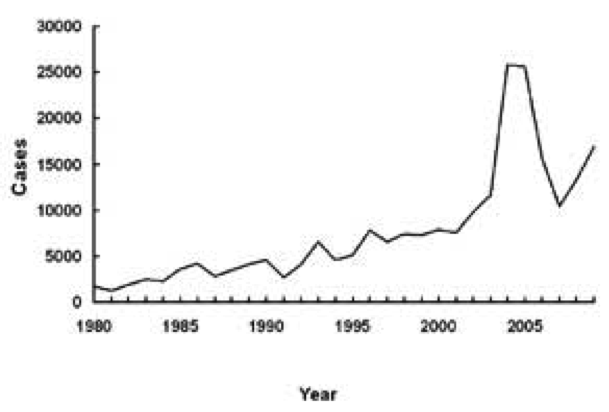 So, why don't parents vaccinate today? Because they did not grow up with these diseases and see thousands of children die. Parents today are not afraid of these diseases because they have not been a part of our lives, so we take for granted how these diseases can cause death or severe consequences.

Parents hear celebrities like Jenny McCarthy, Alicia Silverstone, and Kristin Cavallari cite fear as a reason not to vaccinate. But what many don't realize is that individuals against vaccinating children depend on the rest of us to vaccinate in order to stay safe. The more who crusade that vaccines are evil, the higher the risk that their own children will succumb to diseases that were virtually eradicated just a few years ago.

The CDC says side effects of vaccines are mild. While there are very rare cases of vaccine-related issues, the benefits far outweigh the risk when you compare the numbers from the pre-vaccination era to those after the vaccines were introduced.

Why should parents vaccinate? Because vaccines are preventing complications from childhood illnesses that can cause deafness, blindness, hospitalization, other life-altering effects, and death. Parents should become critical thinkers about decisions that increase the risk of these diseases among their children and others who are unable to fight infection, such as the elderly and the very young. Parents should not make decisions by fear and paranoia, as I did; rather, they should look at the facts. As a society, we should also consider public health and realize that vaccines are safe and very effective, and that not vaccinating is irresponsible.

Fortunately, I woke up from the anti-vax movement before endangering my son. Although his vaccines were spaced out individually and further apart, he ended up receiving them all. My daugther, on the other hand, received them all on time as outlined by the CDC.

I have much greater peace of mind knowing the numbers don't lie and that vaccines save lives and have since they were first introduced years ago. I am glad I did not let my fear of the unknown cause me to put my children and the rest of our society in harm's way.

13942
Leaving the Anti-Vaccine Movement
Even a hospital pharmacist can be misinformed when it comes to vaccinations and the decision to vaccinate their own child.
/contributor/beth-lofgren-pharmd-bcps/2015/01/leaving-the-anti-vaccine-movement