A plant-based diet, rich in dark green and leafy vegetables, might help to ease symptoms of chronic migraines, a physician’s report details.

The recommendation comes after physicians treated an individual with severe migraines without aura, who had previously tried medication, reducing “trigger” foods, and yoga and meditation to counter the severity and frequency of these headaches.

The individual had chronic migraines, occurring between 18 and 24 days every month. The pain started suddenly and intensely in the forehead and left temple and usually lasted around 72 hours. The migraines were accompanied by sensitivity to light and sound, nausea, and vomiting, and were scaled 10 to 12 out of 10 on the pain scale.

The individual’s blood tests revealed that he did not have high levels of systemic inflammation and normal levels of beta-carotene.

Physicians determined this was likely derived from his daily consumption of sweet potatoes, which are high in beta-carotene but low in nutrients responsible for anti-inflammatory and antioxidant properties of carotenoids. Systemic inflammation and oxidative stress are implicated in migraines.

After 2 months on the diet, the patient’s migraine frequency had fallen to 1 day a month and the severity also decreased. The individual also stopped taking his migraine medications due to the decrease in severity and frequency.

His blood tests revealed a substantial rise in beta-carotene levels, from 53 µg/dl to 92 µg/dl. After 3 months, his migraines stopped completely and have not returned in 7.5 years.

The report is published in BMJ Case Reports. 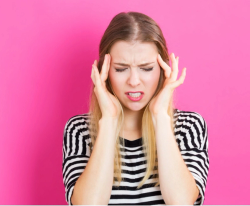