The most common cause of acetaminophen overdose in children is confusion about how much medicine to use- a problem that can be solved by providing parents with better information.

The most common cause of acetaminophen overdose in children is confusion about how much medicine to use--a problem that can be solved by providing parents with better information.

When it comes to medication dosing, parents often have more questions than answers.

In recent months, there has been a great deal of focus on the importance of proper administration and dosing of OTC medications containing acetaminophen in children younger than 2 years, an age group for which dosing errors can have serious consequences.

The most commonly used children’s medicine for relieving pain and reducing fever, acetaminophen, is generally considered safe. However, a recent review by the FDA showed an increase in the number of hospitalizations for acetaminophen poisoning in children 6 years and under. The most common cause of overdose, according to Scott Furness, PhD, director of the FDA’s Division of Nonprescription Regulation Development, stems from parents’ confusion about how much medicine to use.

As a result, the FDA has recommended that the labels of all OTC pediatric acetaminophen products undergo a makeover to include the following:

“Providing parents and caregivers with information on how to dose by weight and how to dose for children 6 months to 2 years of age will help reduce dosing confusion,” said Scott M. Melville, president and chief executive officer of Consumer Healthcare Products Association.

The FDA review also found that between 1992 and 2000, the majority of inquiries received by McNeil Consumer Healthcare were requests for dosing instructions for children under 2 years of age, with many of the inquiries related to Infant Tylenol Drops. 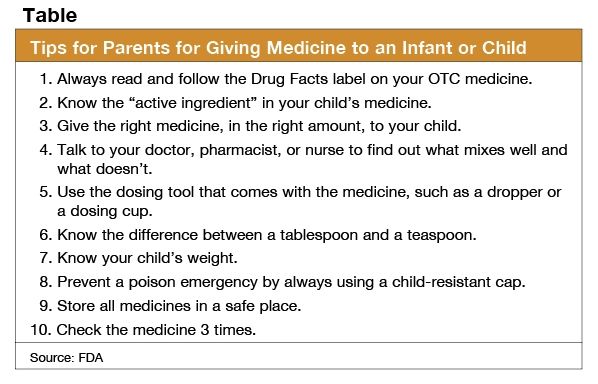 “These findings underscore the importance of targeting interventions for this age group,” Dr. Furness wrote in a letter to FDA advisory committee members.

The FDA also plans to vote on whether weight-based dosing should be added to liquid medicines for children, and whether oral pills containing acetaminophen should also have revised dosing instructions.

In addition, the agency has issued guidance for the makers of OTC liquid medications that calls for every liquid drug to include a measuring device that is clearly marked with units such as teaspoon or tablespoon. The unit of measurement on the cup or spoon should be the same unit of measurement listed on the directions for use, according to the guidelines, which were issued because of ongoing concerns about overdoses that can result from markings that are confusing or unclear.

As always, it is critical that pharmacists instruct parents to always read and follow the label and pay particular attention to the concentration, and to consult a pharmacist or physician if they have any questions about dosage.