Patient Assistance Programs: The Good, the Bad, and the Ugly

For many years, employers, payers, and pharmacy benefit managers have been developing benefit designs to incentivize patients and providers to make cost-effective treatment decisions.

We are all familiar with the patient assistance programs (PAPs) primarily sponsored by drug manufacturers or a partner organization and generally consider them a good thing for assisting patients with high out-of-pocket costs for expensive specialty drugs, especially in this era of high-deductible insurance plans.

Many health care systems have gone so far as to develop organized programs to connect patients with PAPs as a means of enhancing access to medications and reducing their financial burden. This is also potentially beneficial for the institution because it reduces bad debt. At my organization, we have a new job category called medication access specialists, who, among other things, are responsible for connecting patients to PAPs and helping families and patients navigate the sometimes confusing process. Therefore, at the micro level, this is a good thing.

Access to high-cost medications is increased, health care providers are insulated to some extent from unpaid bills, and patients reduce their out-of-pocket costs. In fact, to not participate in a PAP can be interpreted as overpaying for a drug, somewhat like paying the list price for a new car. Of course, the exclusion of governmental insurance plans is unfortunate because these patients are often the ones in greatest need of financial assistance.

So, what could be bad about PAPs? First, it is important to recognize that the funding of PAPs is a business strategy, a budgeted operating cost, and is essentially “baked in” to the overall pricing of pharmaceuticals. For many years, employers, payers, and pharmacy benefit managers (PBMs) have been developing benefit designs to incentivize patients and providers to make cost-effective treatment decisions. Through tiered co-pay and deductible structures, they are attempting to ensure that patients have inancifal skin in the game. Although the true success of these benefit design strategies is controversial, with some evidence that they may have detrimental effects on patient care and outcomes, they are intended to attempt to bend the curve on escalating costs of care. PAPs were primarily introduced to nullify the impact of benefit design on patient financial risk and assure providers that high-cost treatments will not be financially harmful to patients.

The intent is to promote newer, higher-cost treatment options. Given that the cost of PAPs is baked in, it is also a cost-shifting or subsidy strategy, where the expense of high-cost drugs is shared across all commercially insured beneficiaries. On a macro level, the use of PAP programs has the effect of increasing the cost of care for all. That is the bad part of PAPs, but the reality is, you need to participate or you are subsidizing someone else’s drug costs.

Things started getting ugly when “accumulators” and now “maximizers” entered the fray. Understandably, employers and payers do not appreciate that PAP dollars are being used by patients to pay down their deductible and maximum out-of-pocket expense while the plan experiences escalating pharmacy benefit costs because of these expensive agents. High-deductible plans often offer beneficiaries a lower contribution option by taking on some financial risk. If patients on high-cost drug therapy know they are not assuming that financial risk because of being able to use PAP money to eliminate their deductible, one could argue that the system is being gamed to some extent. In response, accumulator programs entered the arena. The accumulator programs offered by payers and PBMs essentially capture the dollars being contributed by PAPs and exclude them from being applied to patients’ deductibles and out-of-pocket maximums.

The employers and plans derive savings, because patients are still responsible for meeting their out-of-pocket deductibles. These changes have understandably been very unpopular with patients and patient advocacy groups, who perceive this as their insurer “stealing” the PAP dollars that are intended to reduce the patient’s financial burden, not the payer’s financial burden. This argument (logical or not) has gained traction, leading to legislation banning the practice in at least 4 states, and similar bills are being considered in many others.

In response to patient dissatisfaction and legal challenges to accumulator programs, the maximizer companies have emerged. And now things get murky. These appear to be commercial companies aligned with but not directly owned by PBMs. There are 2 important nuances relative to the operations of at least some of the programs. First, the patient using highcost specialty drugs is required to sign up separately for the maximizer benefit or face significant financial penalties (see explanation below). Second, the highcost specialty drugs included are defined by the payer as “nonessential health services” and can therefore be removed from the Affordable Care Act—required maximum out-of-pocket costs but are still covered by the plan. Essentially, a maximizer program sets the patient’s out-of-pocket contribution or co-pay for that drug at the maximum amount allowed by the PAP, divided across the year.

For example, if the maximum allowable on the PAP is $15,000 per year, the patient’s out-of-pocket cost will be $1250 per month. That is, the co-pay becomes very flexible, based on the dollars available from the PAP, and the company takes every dollar available. Thus, if the patient does not sign up to participate in the maximizer program, their outof- pocket cost would be $15,000 per year under this example, because it is their “co-pay” for a nonessential health service. Under the maximizer arrangement, the patient’s out-of-pocket cost for treatment is $0, so there is no contribution to the deductible or maximum outof- pocket cost from their drug therapy.

The ugly part of this is that the maximizer companies take a fee that can be as high as 25% of the maximum PAP amount. In the example above, that would be a fee of $3750 on the $15,000 PAP contribution. Therefore, 25% of the pharmaceutical company dollars intended to relieve the patient’s financial burden is now going to a for-profit company that frankly adds no value to the health care system. It is just another drain on the cost of health care. However, until all this nonsense goes away, employers and payers probably have no alternative but to play the game, or they will just be overpaying and subsidizing somebody else’s savings.

This punching and counterpunching between manufacturers, payers, PBMs, and other intermediaries is likely to continue in one form or another. Maximizer programs may lead to the dwindling or death of PAPs as we know them, but rest assured other strategies to nullify the management of expensive drug benefits will emerge from the industry...and then the other parties will identify countermeasures. It should be fun to watch, at least for those who enjoy bloody heavyweight slugfests. 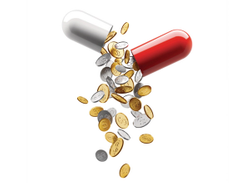