A practicing pharmacist for 40 years, Sherrer has extensive experience in many aspects of the profession. She has worked in both chain and community pharmacy, clinical and consultation, and hospital and research. Most recently, she implemented a PGY1 Community Pharmacy residency program at her independent pharmacy. Over the past 20 years, Sherrer has had ownership in 4 pharmacies, and she is currently a partner in Poole’s Pharmacy in Marietta, Georgia, with her husband, John, and son, Thomas.

Throughout her career, Sherrer has consistently served in pharmacy initiatives and with organizations locally, statewide, and on the national level. She served as president of the Georgia Pharmacy Association, from 2007 to 2008; and in 2014 was named honorary president of the NCPA. She received the Albert E. Rosica Jr. award from the Research and Education Foundation of the American College of Apothecaries in 2015 for outstanding contributions to pharmacy education; and was awarded the Bowl of Hygeia, which recognizes pharmacists who possess outstanding records of civic leadership in their communities, in 2018.

Pharmacy has been a family affair in the Sherrer family. She said that 1 of her greatest achievements is finding a work-life balance. Sherrer is married to a pharmacist, is the mother of a pharmacist, and is the mother-in-law of a pharmacist. Her daughter is also involved in the family business, managing First Aid of America, a division of Poole’s Pharmacy. During Sherrer's free time, she enjoys spending time with her grandchildren. 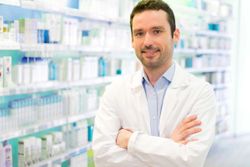