Congress' summer recess may not be very relaxing, with all sides in the health care debate expected to mount August offensives.

As members of Congress head home to their districts for their summer break, proponents of health reform remain hopeful a law will be enacted when legislators return to the nation's capital in September, although the debate is forecast to continue in earnest during the recess period. What shape a final law would take is still unknown, but versions of the "Affordable Health Choices Act" recently approved by key congressional committees may provide some clues.

Pharmacists won an important victory last Friday night when bipartisan agreement was reached on an amendment sponsored by Rep G.K. Butterfield (D, NC) establishing a grant program for pharmacist-delivered medication therapy management (MTM) services. The amendment, similar to language included in the Senate Health, Education, Labor, and Pensions (HELP) Committee health reform blueprint, was approved by the House Energy and Commerce Committee on July 31. That committee worked late into the night to pass its health reform plan in a 31-28 vote.

The version approved by the House Energy and Commerce Committee also includes an amendment by Rep Anna Eshoo (D, CA) providing for a 12-year period of market exclusivity for brand name biologic drugs, again mirroring a provision in the Senate HELP Committee bill. This amendment is a setback for the Obama administration and consumer advocates who argue that a shorter patent protection period would save patients money through greater access to less costly biogenerics.

In separate interviews with CNBC last week, top executives at 2 retail chains expressed continued support for health reform as a means to rein in costs and improve care. Gregory Wasson, Walgreens' president and chief executive officer, reiterated the importance of disease prevention, noting that 16,000 of the chain's pharmacists are currently certified to administer immunizations. He also cited the importance of health and wellness initiatives in areas like obesity and smoking cessation in lowering health care costs. CVS Caremark Chief Executive Officer Thomas Ryan highlighted the important role of evidence-based best practices and technology in improving care and lowering costs, along with such initiatives as health care coaching and retail clinics, which help keep patients from relying on more costly emergency department visits for routine care. 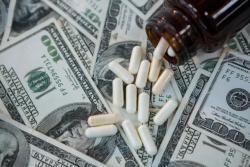 With Cash Customers on the Rise, AI Could be Key to Pharmacy Pricing Profitability