Pneumococcal Disease: Changing Under the Pressure of Vaccination
2016-11-21 14:29:31
Jeannette Y. Wick, RPh, MBA
Streptococcus pneumoniae infection is a leading cause of morbidity globally. Researchers have identified more than 90 S pneumoniae serotypes based on the organism’s polysaccharide capsule. As many as 40% to 60% of young children are colonized with S pneumoniae.1 The severe form of the infection, invasive pneumococcal disease (IPD), causes severe blood or cerebrospinal illnesses (and often death).2 Before effective vaccines were available, this organism caused approximately 11% of deaths in children younger than 5 years.3

To completely understand pneumococcal vaccines and appreciate the progress in this area, pharmacists need to review some history (Figure4). During World Wars I and II, countless soldiers died of complications, mainly pneumococcal pneumonia, during pandemic flu epidemics. Until the 1970s, high development costs and low societal acceptance were barriers to vaccine development. As antibiotic resistance grew and statisticians documented pneumococcal infections’ huge human and financial costs, interest in a vaccine increased. The FDA approved a 14-valent pneumococcal polysaccharide vaccine (PPV) in 1978.4 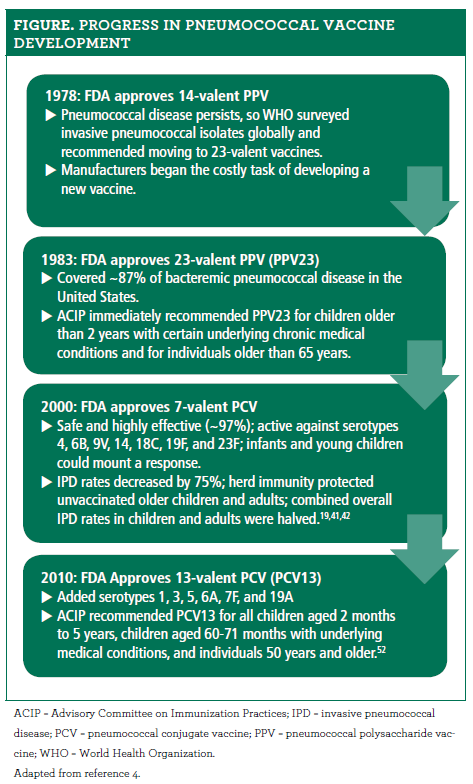 Early Modern Vaccines
The World Health Organization (WHO), concerned that the 1978 vaccine was insufficient to prevent most pneumococcal disease, continued surveying invasive pneumococcal isolates globally to identify serotypes of greatest concern. Subsequently, WHO recommended moving to 23-valent vaccines, and by 1983, this was a reality.5,6

Children younger than 2 years could not mount an adequate response to PPV23 because nonconjugated PPVs activate B cells, but elicit T-cell-independent immune responses. Children lack the mature immune system needed to complete this task. However, children older than 2 years responded at rates of 57% to 75%.5,6 PPVs have limitations: they do not induce immune memory, have no booster effect, and have almost no effect on nasopharyngeal carriage in patients of any age.7

A safe vaccine for children became a reality in 2000 when the FDA licensed a pneumococcal conjugate vaccine (PCV7). PCV7 was moderately effective against pneumonia and somewhat effective at reducing otitis media episodes.8-10 The Advisory Committee on Immunization Practices (ACIP) immediately recommended routine PCV7 use in children aged 2 to 23 months and in children aged 24 to 59 months with anatomic or functional asplenia, sickle cell disease (SCD), any immunocompromising condition, or chronic illness.11 In 2007, the ACIP expanded its recommendation to include all children aged 2 to 59 months.12
Within a year, IPD caused by PCV7-covered serotypes had been completely eliminated in US children younger than 5 years, an accomplishment akin to a modern miracle. Over several years, the vaccine reduced preventable infection by 94% in all ages.3

Although PCV7’s impact was robust, diseases caused by serotypes not included in PCV7 (ie, serotypes 6A [which is partially covered in PCV7], 15, and 19A) increased in children and certain adult populations. Called “replacement disease,” increases in infection were small, but concerning, compared with the overall disease reduction.13,14 Serotype 19A was a special concern because of multidrug resistance.15-19
In February 2010, the FDA approved PCV13, which replaced PCV7. PCV13 is approved for the prevention of IPD among infants and young children. With PCV13’s 6 additional serotypes, health scientists hoped that its introduction would reduce the number of IPD cases.20

The PPV23 vaccine remains a safe, important intervention. Serotypes covered in PPV23, but not newer vaccines, still result in a high burden of IPD, and broader protection is needed in patients who are immunocompromised or at elevated risk.

Pneumococcal Persistence
Despite the availability of vaccines, IPD and influenza are the 8th leading cause of death in the United States.21 How could this be? The problem is serotype replacement and nonvaccine serotypes.
Serotype replacement can occur through (1) increased prevalence of serotypes already present in the population or (2) appearance and spread of new serotypes that had been unable to cause disease until the vaccine eliminated more pathogenic serotypes; in other words, the serotypes emerge when competition is eliminated.22

The mechanism of serotype replacement is unclear. It is probably a multifaceted phenomenon that involves new serotypes, similar serotypes that co-transform (eg, 19F into 19A, conferring penicillin resistance), or a bacterial capsular switch.23 Antibiotic use, environmental conditions, geographic location, frequency of comorbid conditions, immunosuppression, or other factors also cause noteworthy increases in non-PCV7 serotypes in some populations.23

Serotype replacement, while a concern, does not outweigh the benefits of vaccination.26

The Pharmacist’s Role
Pneumococcal vaccination rates among children are high, but rates among adults—targeted at 90% for individuals 65 years and older and those with high-risk conditions—are around 30% to 50%.27,28 The Table29 lists CDC recommendations for specific pneumococcal vaccines.

Influenza/Pneumococcus coinfection is common during epidemics and causes up to 25% of all influenza-related deaths.30 Seniors vaccinated against influenza and pneumococcal disease reduce their risk of all-cause pneumonia by 29% and mortality by 35%.26,31-33 The message we need to deliver is simple: seniors need pneumococcal and influenza vaccinations.
Ms. Wick is a visiting professor at the University of Connecticut School of Pharmacy, where she teaches immunization technique.
References
33173
Pneumococcal Disease: Changing Under the Pressure of Vaccination
To completely understand pneumococcal vaccines and appreciate the progress in this area, pharmacists need to review some history.
/publications/issue/2016/November2016/pneumococcal-disease-changing-under-the-pressure-of-vaccination