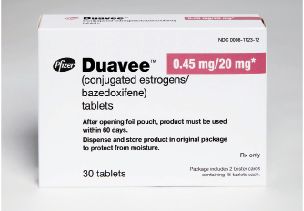 The FDA has approved Pfizer Inc’s Duavee (conjugated estrogens/bazedoxifene) for use in women with a uterus for the treatment of moderate to severe vasomotor symptoms associated with menopause and the prevention of postmenopausal osteoporosis. The approval carries the limitation that Duavee should be used for the shortest duration of time consistent with treatment goals and risks for the individual patient.1 When Duavee is used solely for the prevention of osteoporosis, its use should be limited to patients at significant risk and nonestrogen medication should be considered as well.2,3

Pharmacology and Pharmacokinetics
The conjugated estrogens component of Duavee is an agonist at the a and b estrogen receptors, while the bazedoxifene component is an agonist/antagonist. The composite effect is specific to each target tissue.

The pharmacokinetics of Duavee have not been studied in pediatric patients, patients older than 75 years, or patients with renal or hepatic impairment.1

Dosage and Administration
Each Duavee tablet contains 0.45 mg of conjugated estrogens and 20 mg of bazedoxifene. It should be taken once daily, without regard to meals, and swallowed whole. When used for prevention of osteoporosis, supplemental calcium and vitamin D should be considered if dietary intake alone is not sufficient.1

Clinical Trials
Duavee’s role in vasomotor symptoms was evaluated in a randomized, double-blind, placebo-controlled study of 318 women. At 12 weeks, a significant reduction in moderate to severe hot flashes was found in the Duavee arm (74% reduction) compared with the placebo arm (47% reduction). The severity of hot flashes was also shown to decrease by 39% in the Duavee arm and 13% in the placebo arm.

When studied for prevention of osteoporosis, Duavee was found to significantly increase bone mineral density in the total hip and lumbar spine more than placebo at 1 and 2 years.1,2

Contraindications, Warnings, and Precautions
Duavee carries the following boxed warning: Women taking Duavee should not take additional estrogen products. A woman with a uterus who is using unopposed estrogens has an increased risk of endometrial cancer. Estrogen therapy should not be used for the prevention of cardiovascular disease or dementia. The Women’s Health Initiative (WHI) estrogen-alone substudy reported increased risks of stroke and deep vein thrombosis. The WHI Memory Study estrogen-alone ancillary study reported an increased risk of probable dementia in postmenopausal women 65 years and older.

Use of Duavee is contraindicated in women with undiagnosed or abnormal uterine bleeding; with known or suspected breast cancer, or history of breast cancer; with known or suspected estrogen-dependent neoplasia; with active, or history of, venous or arterial thromboembolism; with hypersensitivity to estrogens, bazedoxifene, or any of their components; with known hepatic impairment or disease; with known protein C, protein S, or antithrombin deficiency or other known thrombophilic disorders; who are or may become pregnant; who are breast-feeding.

Patients should not use additional estrogens, SERMs, or progestins during treatment with Duavee. Women using Duavee may be at increased risk of cardiovascular disorders, such as venous thromboembolism, pulmonary embolism, stroke, and retinal vascular thrombosis. Patients using Duavee should be monitored for malignant neoplasms, such as endometrial cancer, breast cancer, and ovarian cancer. Women with a body mass index >27 kg/m2 may have an increased risk of endometrial hyperplasia. Estrogens increase the risk of gallbladder disease. Duavee should be discontinued if vision loss, severe hypertriglyceridemia, or cholestatic jaundice occurs. Thyroid function should be monitored in patients using thyroid replacement therapy. Duavee is metabolized partially by CYP3A4.

Dr. Holmberg earned her PharmD from the University of Connecticut and completed an ambulatory care residency at the Phoenix VA Healthcare System. Her practice has also included pediatrics and inpatient mental health. She resides in Phoenix, Arizona.
References
11689
Duavee by Pfizer, Inc
/publications/issue/2014/June2014/Duavee-by-Pfizer-Inc-