Contraception Controversy: The Pharmacist's Perspective
2014-06-17 04:00:00
Jeannette Y. Wick, RPh, MBA, FASCP
In many states, pharmacists have the right to exercise conscientious refusal to dispense contraceptives, but they also have a responsibility to meet patients’ and employers’ needs. Few of us think about the individual—and sometimes unique—drugs we’ll need to dispense when we start pharmacy school. Some of those drugs are controversial and can stir emotions. Articles about controversial issues are difficult to write and can be difficult to read. To benefit most from this article, think about your personal beliefs about coitus (sexual intercourse between men and women). What is coitus? Think about its psychological, biological, and emotional characteristics. Think about hormones and relationships, and eggs and sperm. Think about the potential for pregnancy. It’s a lot to think about.

Now, think about political and religious beliefs about sex, and what you think you know about them. Overwhelming, isn’t it? This article presents facts and offers information and a stepwise approach to developing an informed approach regarding refusal to dispense contraceptives. 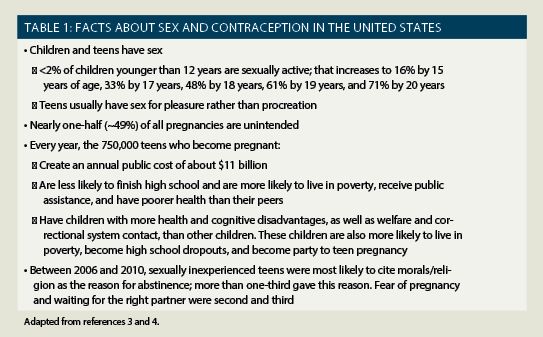 Startling Realities About Sex
Sexually inexperienced Americans see plenty of sex on television. The media often imply that the most satisfying sex is an instantaneous, mutually gratifying, intimate, romantic experience. Boy meets girl, the couple falls in love, and they have completely satisfying unprotected sex soon after meeting. Any talk about birth control, sexually transmitted diseases, or erectile dysfunction isn’t included in the original script.1,2 People who have had consensual or nonconsensual sex will recognize that this is absurd. Table 13,4 presents some realities about sex.

A History of Sexual Mind-sets
For most of human history, women used birth control to conceal illicit affairs, since illegitimate birth was a source of shame, stigma, and societal and financial marginalization. By the 1950s, married couples could use a diaphragm with spermicidal jelly, condoms, or several untrustworthy methods (withdrawal, douching, or rhythm) to prevent pregnancy.5 Single women had trouble obtaining contraception or advice, since it implied unthinkable premeditation. In 1957, the FDA approved the first contraceptive pill. By 1965, 6.5 million married women and a lower number of unmarried women were on “the pill.” Medical historians have hailed it as a miracle of modern science.6

Today, among sexually active women aged 15 to 44 years, 99% have used some form of contraception.7 About 20% of women end their reproductive years childless, double the percentage in the 1970s, because contraception is available. Highly educated women are most likely never to have a child, but this is changing.8

Throughout history, religious and legal institutions have had strong influences on sex, contraception, and abortion. Religious moralities about these issues are too numerous to list. In terms of United States law, the Supreme Court decided married couples have a constitutional right to use contraception—in 1965 in Griswold v Connecticut.9 In 1972, the court reviewed this issue again and decided all adults have that same right. The 1973 Roe v Wade Supreme Court decision allowed abortion in some circumstances, if the physician judged it wise, and it empowered states to create laws about abortion.10

In the past 40 years, states have addressed abortion individually and disparately.11 In 2006, the FDA approved Plan B, the oral “morning after” pill. In June 2013, the FDA changed the status of Plan B from prescription to OTC per a federal court order.12,13 These decisions influence women’s health-related decision making and pharmacists’ practices because pharmacies sell contraception.11

Endnote
Pharmacists’ attitudes concerning contraceptives—or any controversial medications (eg, medications that would be used under a death-with-dignity law)—can influence medication access. Eliminating personal biases and attitudes is difficult. Ultimately, tolerance and understanding are required on both sides to develop reasonable answers to the dilemma. In many states, pharmacists have the right to exercise conscientious refusal, but pharmacists also have the responsibility to meet patients’ and employers’ needs.

Ms. Wick is a visiting professor at the University of Connecticut School of Pharmacy.
References
11699
Contraception Controversy: The Pharmacist's Perspective
In many states, pharmacists have the right to exercise conscientious refusal to dispense contraceptives, but they also have a responsibility to meet patients' and employers' needs.
/publications/issue/2014/June2014/Contraception-Controversy-The-Pharmacists-Perspective