Insulin Resistance: Recognizing the Hidden Danger
2012-10-05 04:00:00
Yvette C. Terrie, BSPharm, RPh
Interventions to improve insulin sensitivity can go a long way toward improving overall health. Insulin resistance is clinically defined as the state in which a given concentration of insulin produces a less than expected biologic effect and, in turn, causes the body to not utilize insulin efficiently.1-3 In an effort to compensate for this defect, the pancreas releases additional amounts of insulin in an attempt to maintain normal blood glucose levels.1-3

Over time, the beta-cells, which are the insulin-producing cells in the pancreas, become less and less capable of meeting insulin demands.1-5 As a result, blood glucose levels begin to escalate, causing prediabetes and eventually type 2 diabetes.3

Insulin resistance plays a significant role in the pathogenesis of other serious medical conditions as well, including obesity, hypertension, type 2 diabetes, dyslipidemia, and cardiovascular disease.2,8 The growing obesity epidemic in the United States continues to escalate the number of individuals at risk for developing insulin resistance, even in the pediatric patient population. Insulin resistance has also been linked to polycystic ovary syndrome (PCOS).8,9 Current studies suggest that 50% to 70% of women with PCOS have some degree of insulin resistance.10 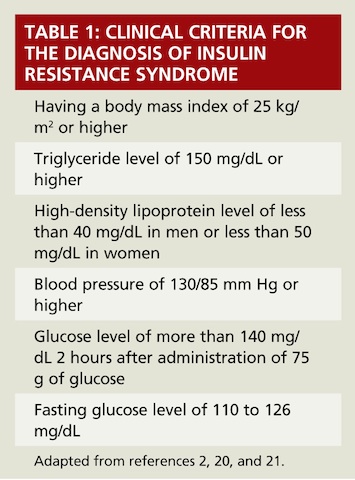 Although the cause of insulin resistance is complex and not fully understood, many factors/risks have been implicated as contributing to its development, including genetic and environmental factors; family history of diabetes; being overweight/obesity; sedentary lifestyle; ethnicity (African American, Hispanic, Asian); the aging process; stress; pregnancy; other medical conditions, such as Cushing’s syndrome, cirrhosis, and PCOS; and the use of certain pharmacologic agents, including cyclosporine, thiazide diuretics, niacin and protease inhibitors, and nucleoside analogues.2,5,8-11 Waist circumference greater than 35 inches in women and greater than 40 inches in men is considered a risk factor for insulin resistance as well.12

Individuals with moderate to severe insulin resistance may present with a dermatologic condition referred to as acanthosis nigricans, which is characterized by dark patches of skin around the neck, armpits, knees, and elbows.10,11,13 Acanthosis nigricans occurs more frequently in Hispanics and African Americans than in Caucasians.10,11,13

The goals of treating insulin resistance are to improve insulin sensitivity, decrease health complications, improve overall health, and decrease morbidity and mortality.2 Lifestyle modifications, including dietary changes, weight loss, exercise, cessation or reduction of alcohol use, and cessation of smoking, are typically first lines of defense in managing insulin resistance.1,2,9-11

Metformin is classified as a biguanide, which is an insulin sensitizer that reduces hepatic glucose output and peripheral resistance to insulin action and lowers plasma insulin levels.2 Thiazolidinediones (pioglitazone and rosiglitazone) are classified as insulin-sensitizing agents that increase the disposal of glucose in peripheral tissues and act by activating a specific nuclear receptor, the peroxisome proliferator–activated receptor gamma.2 As of September 2010, the FDA is requiring a restricted access program to be developed for rosiglitazone under a Risk Evaluation and Mitigation Strategy.16 In addition, in June 2011, the FDA warned that use of pioglitazone for more than 1 year may be associated with an increased risk of bladder cancer.17,18

Insulin resistance affects several organ systems and, if left untreated, can lead to serious health consequences (Table 2). The results from the Diabetes Prevention Program (DPP) trial offers health care professionals with helpful guidance when encountering patients at risk for developing diabetes, including those with insulin resistance. Involving 3200 participants with impaired glucose tolerance, the DPP reported in part that strict and rigorous lifestyle interventions decreased the development of type 2 diabetes by 58%.19 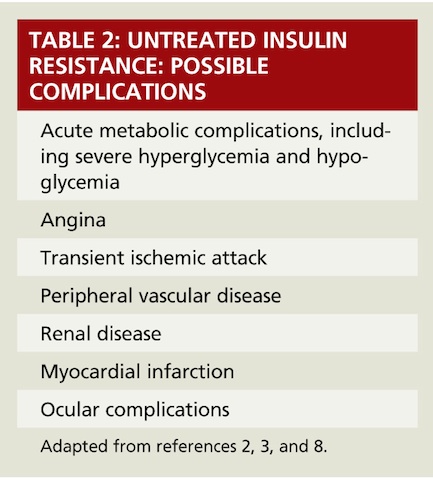 Adhering to strict dietary modifications, implementing an exercise routine, and promoting weight loss can have a positive impact on the health of those patients affected by insulin resistance. Through patient education and screening patients at risk for insulin resistance, health care professionals can assist patients in improving their overall health and decrease the associated health consequences. Having a thorough understanding about insulin resistance, the complications, management, and prevention, patients can make informed decisions about their health and possibly live longer, healthier lives. 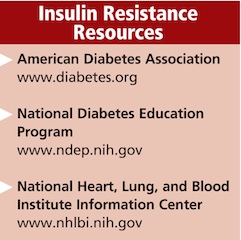