This close look at the top 200 drugs of 2010 by sales and prescriptions dispensed reveals the story of a pharmaceutical market in flux.

Recent trends in the US prescription drug market have continued to show slow growth and a shift toward the predominance of generic alternatives. As reported by the IMS Institute for Healthcare Informatics in April of this year, total prescription sales in the United States reached more than $307 billion in 2010, a 2.3% rise from the previous year.1

Oncologics topped the class rankings based on total spending with $22.3 billion, followed by respiratory agents, lipid regulators, antidiabetes drugs, and antipsychotics.2 Despite this, sales growth for oncologics was disappointing at 3.5%, the lowest level ever recorded in this class. Growth for antidiabetes medications and antipsychotics remained strong at 12.5% and 10%, respectively. Approximately 165 million prescriptions for antidiabetes medications were filled in 2010, a 3.8% rise over the previous year. Human insulins and synthetic analogues, including Lantus SoloSTAR (insulin glarine [rDNA origin]), combined for 64% of growth in the class. Spending for antipsychotics grew by $1.4 billion, led by Abilify (aripiprazole), Seroquel (quetiapine), and Zyprexa (olanzapine).

Respiratory agents were second in total spending at $19.3 billion, 6.5% above the previous year. Spending growth for this class, which dropped from $2.2 billion in 2009 to $1.1 billion in 2010, was led by Advair Diskus (fluticasone/salmeterol) and Singulair (montelukast).

Lipid regulators were ranked highest in prescription volume and third highest in total spending, but spending grew by less than 1% as many patients turned to the available generic alternatives. Lipitor (atorvastatin) was the single top-grossing product of 2010 with $7.2 billion in sales. The combined number of prescriptions for generic simvastatin from multiple manufacturers made it the second most widely prescribed product in 2010.1,2

Several factors have influenced the current trends of the prescription drug market in the United States. In a press statement from the IMS Institute for Healthcare Informatics, key elements included the increased use of generics, patent expirations of several major branded products, and less demand for new drug therapies.1

The shift from branded to generic products has been a noticeable trend in recent years, and 2010 proved to be no exception. Spending on brand name products totaled $229 billion, a 0.7% decrease over the previous year.2,3 Total spending on brand products increased by $16.6 billion in 2010, but the increase in rebates and discount offers offset spending growth by $4.5 billion. New brand products, defined as brand name products having been available on the market for less than 24 months, generated $4 billion last year and accounted for 2.8% of total brand spending. This is down from $6.7 billion generated in 2009 and $11 billion generated in 2006. Conversely, spending on both branded and unbranded generics increased in 2010. Generics represented 78% of the total number of prescriptions dispensed in the United States last year.2

Patent loss accounts for a significant drop in total spending for brand products. IMS Health reports that when a brand product loses its patent protection, more than 80% of the product’s volume is replaced by generic alternatives within 6 months.2 In recent years, the large number of patent expirations on top performing brand medications has been dubbed the “patent cliff.” 4 Major patent expirations of 2010 included Cozaar (losartan), Hyzaar (losartan plus hydrochlorothiazide), Aricept (donepezil), Lovenox (enoxaparin), and Flomax (tamsulosin).2,5

Combined, the patent expirations of 2009 and 2010 exposed more than $32 billion of the market share held by branded products to new generic competition, the highest 2-year total on record.2 Over the past 5 years, the total market share now facing generic competition has grown to 25.7%, an increase of nearly 3% over the previous 5-year span.2,4 This trend will continue into 2011 and 2012 as several major brand products, including Plavix (clopidogrel), Lipitor, and Protonix (pantoprazole), will face generic competition.2,4 The impending patent loss of many of the industry’s highest earning products will jeopardize as much as $250 billion in sales by 2015.4

The current economic environment resulted in significant changes in the health care system. High unemployment levels, the large number of individuals who lost their medical insurance coverage, and rising health care costs have contributed to a decrease in the number of physicians’ office visits and newly initiated chronic drug therapy regimens.1,2 The number of  doctor’s office visits fell by 4.2% last year and the number of patients initiated on new therapy for chronic health conditions decreased by 3.4 million.2 Continuing therapy for chronic disease states increased overall in 2010, but shifted further away from the use of brand products. The use of generics in continuing therapies rose by 11%, accounting for two-thirds of all continuation prescriptions. Conversely, the number of brand continuations fell by approximately 12%.2

Over the past 5 years, the use of thirdparty insurance to pay for prescriptions declined from 66% of total prescriptions dispensed to 63% last year. Medicaid and Medicare Part D, on the other hand, paid for over 30% of dispensed prescriptions in 2010, up from 22% in 2006. The average prescription copay decreased by 1.8% as a result of more patients turning to generic alternatives.1,2

A total of 44 new brand medications were released in the United States last year, of which 21 were classified as New Chemical Entities (NCEs).2 Ten products with novel mechanisms of action were introduced, including new treatments for multiple sclerosis (Gilenya), osteoporosis (Prolia), and breast cancer (Halaven).2,6 Six NCEs with existing mechanisms of action and 5 new orphan drugs were also launched.2

Orphan drugs are designed to treat diseases affecting fewer than 200,000 individuals in the United States per year, or diseases that affect more than 200,000 individuals but that are not expected to generate enough sales to cover the costs of development and distribution. Incentives for orphan drug development were established in The Orphan Drug Act of 1983, and include research grants, tax incentives, and market exclusivity for 7 years.7 An average of $62 million per new brand product was spent last year, as opposed to $114 million spent per new brand in 2006, reflecting a market shift toward orphan drugs and products with existing mechanisms of action.1,2

The US drug market will continue to reflect the current trends of patent expiration and brand/generic competition in the near future. Several new brand drugs have the potential to generate billions of dollars in spending, including Pradaxa (dabigatran), Gilenya (fingolimod), and Victoza (liraglutide), but the impact on spending will be tempered by the patent loss of several of the market’s biggest earners.2,4,5,6

Although the number of available therapy options has never been greater, patients and providers seem to be increasingly conscious of cost and spending. The current economic climate has stunted health care growth noticeably. Many patients have been forced to choose less expensive treatment options or forgo treatment altogether. The long-term effects of these choices on both patient health and the prescription drug market remain to be seen.1,2 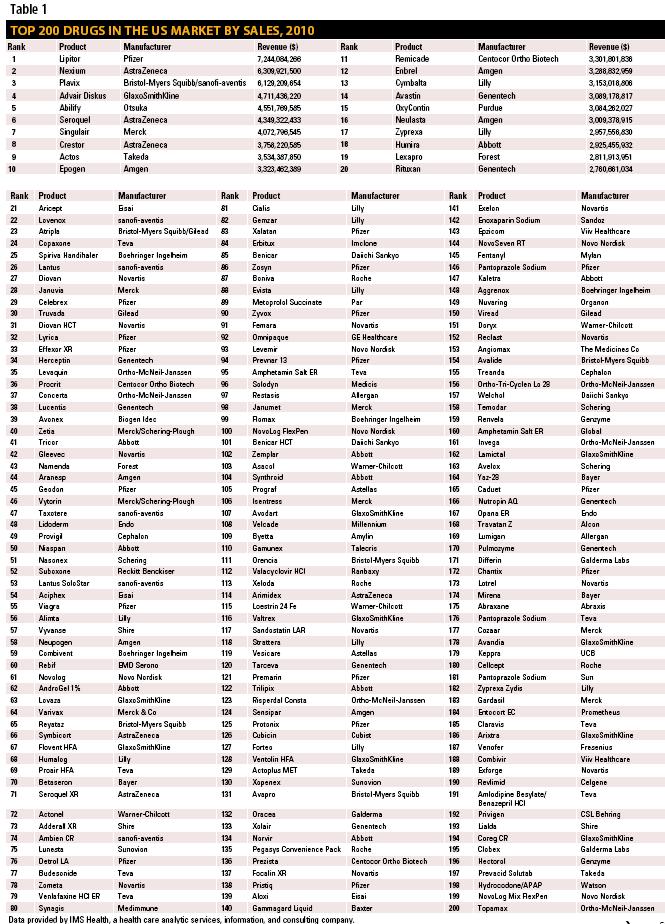 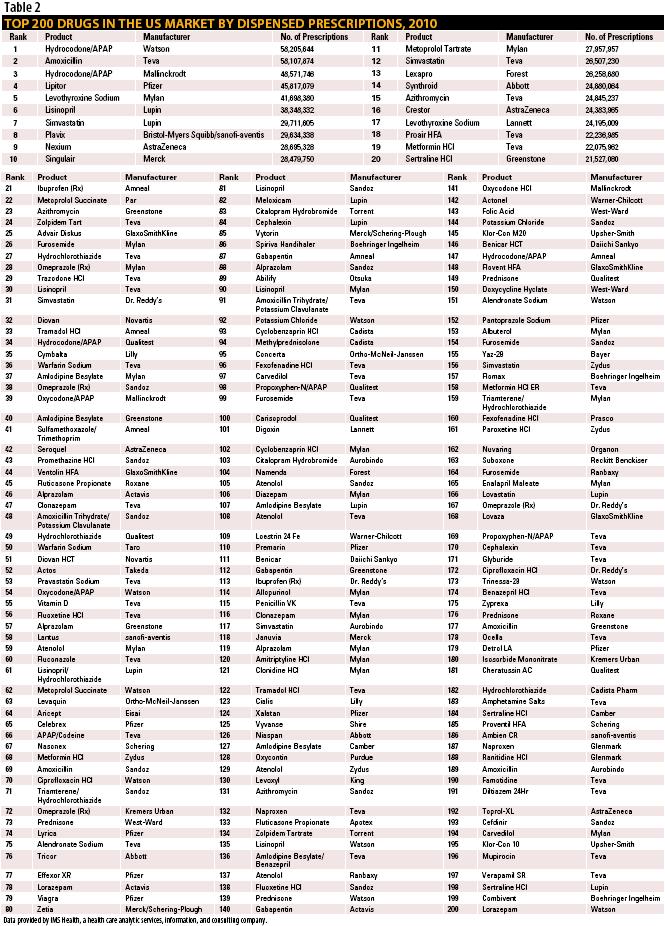