Acid suppression therapy is commonly used for gastrointestinal (GI) prophylaxis in health systems. Over the past 25 years, medications that reduce gastric acid or protect the stomach mucosa have been credited in lowering the risk of stress ulcer-related bleeds from approximately 20% to 30%, to 2% to 14%.1 Available agents include antacids, sucralfate, and misoprostol; the mainstay of acid-suppressive therapy is currently with histamine2-receptor antagonists (H2RAs) and proton pump inhibitors (PPIs).More recently, concern has grown over the widespread overuse of acid-suppressive agents for stress ulcer prophylaxis in health systems.

Stress ulceration can occur after trauma, surgery, organ failure, sepsis, or thermal injury.2 Causes of stress ulcer lesions appear to be multifactorial.3 Hypersecretion of acid is common in patients following head and thermal injuries.1 In addition, normal protective mechanisms may be altered during stressful events, causing a reduction in mucosal blood flow that can contribute to ulcer formation. Thus, acid suppression therapy can play an important role in the prevention of GI stress ulcers in certain hospitalized patients.

Acid-Suppressive Agents
Acid-suppressive agents act either by reducing gastric acid or by protecting the stomach mucosa. Antacids are bases that contain aluminum, magnesium, or calcium that can temporarily neutralize gastric acid. These agents are normally indicated for minor symptoms of heartburn and acid-related indigestion. The major side effects of antacids include diarrhea for magnesium-containing compounds and constipation for aluminum- and calciumcontaining agents.

Sucralfate is a polysaccharide that complexes with aluminum to prevent chemically induced mucosal damage and heal gastric ulcers. Sucralfate does not alter the acid secretion of the stomach; rather, it stimulates the formation of granulation tissue and delivers growth factors to the injured tissue. Aluminum toxicity should be monitored when using sucralfate.

The use of misoprostol has been approved for the prevention of nonsteroidal anti-inflammatory-induced gastric ulcers. Misoprostol is a prostaglandin analog that selectively inhibits acid secretion as well as enhances mucosal defense mechanisms. Its use is contraindicated in women of childbearing potential, as it can lead to spontaneous abortion.4

H2RAs reduce acid secretion by blocking the histamine receptors on parietal cells. Currently 4 H2RAs are available in the United States (Table 1). The primary use of H2RAs is for the treatment of gastroesophageal reflux disease (GERD) and peptic ulcer disease (PUD).5

PPIs (Table 2) are more potent acidsuppressing agents and are most commonly used for the treatment of PUD, GERD, and indigestion. These agents provide near-complete blockage of acid secretion by inhibiting the hydrogen-potassium ATPase pump on the parietal cell. All of the PPIs are weak bases that concentrate in the acidic compartments of the parietal cell. PPIs are then activated by the acid and subsequently form a reactive sulfhydryl group. This group binds to the cysteine moiety on the hydrogen-potassium ATPase pump and inactivates the enzyme.

Because PPIs rely on an acidic environment to be activated, the simultaneous use of H2RAs theoretically would decrease their effectiveness.6 Normally all acid-suppressive agents are remarkably safe drugs and usually well-tolerated.

Guidelines for Prophylaxis
The most current guidelines for the use of acid-suppressive agents in stress ulcer prophylaxis were published by the American Society of Health-System Pharmacists in 1999.2 According to these guidelines, strong evidence supports prophylactic therapy in patients who require mechanical ventilation for >48 hours or in patients with coagulopathy (international normalized ratio >1.5, partial thromboplastin time >2 times normal, or platelet count <50,000). Meta-analyses from randomized controlled trials have shown that patients requiring mechanical ventilation have a 15-fold increased risk of GI bleed, and those with coagulopathy have a 4-fold increased risk of bleeding when compared with other patients.7

Prophylaxis is recommended for patients with a history of GI ulcer or previous bleeding within 1 year of admission. In addition, expert opinion from the panel states that prophylaxis is indicated in patients with at least 2 of the following risk factors: sepsis, intensive care unit (ICU) stay of >1 week, occult bleeding lasting ≥6 days, and the use of high-dose corticosteroids (>250 mg/day of hydrocortisone or the equivalent). Prophylaxis is not recommended for general and surgical adult patients in non-ICU settings with <2 of these risk factors. Note that the guidelines assessed stress ulcer prophylaxis with antacids, H2RAs, and sucralfate and did not include PPIs.

Despite these specific guidelines, acid-suppressive agents have been over-used for stress ulcer prophylaxis in non-ICU patients. A review assessing the prevalence of acid-suppressive therapy at the University of Michigan was performed by Pham et al.8 The esearchers found that before admission, 29% of patients were on acid-suppressive therapy. Once admitted to the noncritical care general medicine service, this number increased to 71%. A retrospective chart review of the medical records showed that 69% to 89% of therapy was deemed inappropriate according to established indications.

Nardino et al found similar results in 226 patients admitted to the general medicine unit at the Hospital of Saint Raphael in New Haven, Connecticut.9 The researchers reported that 65% of acid-suppressive therapy was considered inappropriate as determined by consensus review. Of these patients, 55% were discharged on continued therapy.

Zink et al assessed the long-term use of acid-suppressive therapy started inappropriately at William Beaumont Hospital in Detroit, Michigan.10 Of the 324 patients admitted to the general medicine service, 60% received acid suppression without an appropriate indication. The most frequent reason for prescribing therapy was "GI prophylaxis in low-risk patients." Other reasons included pancreatitis and steroid use. About 34% of these patients with inappropriate acid suppression were discharged on the acid-suppressing medication. A follow-up showed that 80% of these patients continued on the medication 3 months after discharge, and 50% of patients were still on acid suppression therapy 6 months postdischarge.

A possible reason behind the inappropriate use of acid-suppressive agents may be the general acceptance that these medications have a low rate of side effects.11 Although this may be true in most cases, there have been reports that altering the acid content in the gut can increase the risk for Clostridium difficile colitis during hospitalization.12

Laheij et al reported that acid suppression could increase the risk of community-acquired pneumonia.13 Case reports of vitamin B12 deficiency and an increased risk of hip fractures have been reported with long-term PPI use.14 The inappropriate use of acidsuppressive agents also has placed an unnecessary burden on health care costs. The estimated cost of a PPI was $102 per month; H2RAs averaged $25 per month for generic forms and $87 per month for a brand name drug.9

Formulary Considerations
The development of institution-specific guidelines for acid suppression therapy can reduce costs and potential side effects for health systems. Stress ulcer prophylaxis with acid-suppressive agents should be reserved for patients who are in the ICU or who carry ≥2 major risk factors for GI bleed.

Education for providers through inservice training sessions has proven to be beneficial. A study conducted by Liberman and Whelan at the University of Chicago Hospitals showed that a 1-hour educational intervention with the house staff lowered the rate of inappropriate stress ulcer prophylaxis from 59% to 29% after 1 month.15 Health systems with computer order entry also can intervene effectively through pop-up reminders.16 Finally, pharmacy and therapeutics committees can develop a therapeutic interchange protocol among the H2RAs and PPIs. The general clinical equivalence of these agents makes it possible to place only 1 agent from each class on a formulary. This would primarily benefit acquisition costs without compromising drug therapy.17

Factors that need to be considered before the addition of an H2RA or PPI to a health-system formulary would include the comparison of pharmacokinetics, pharmacodynamics, available dosage forms and routes of administration, safety, and cost of each agent. In addition, product preparation and administration costs should be taken into account. Most ICU patients cannot take oral medications; thus, an IV formulation of each H2RA and PPI needs to be available on formulary as well. The duration of therapy and the transition from IV to oral or enteral formulations also should be considered by the committee and placed into institutional guidelines. 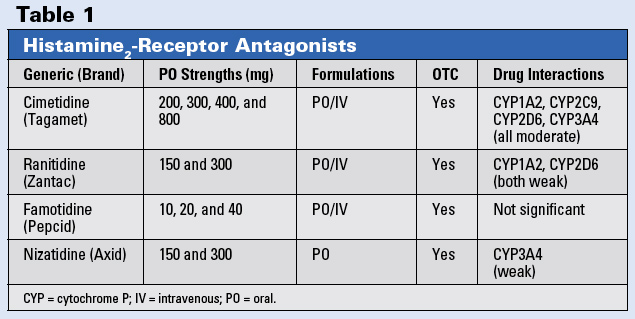