New specialty therapies to treat psoriasis and severe asthma were approved in March. Eli Lilly’s Taltz (ixekizumab) is an interleukin (IL)-17A inhibitor that competes with Novartis’ Cosentyx (secukinumab) in patients with moderate to severe plaque psoriasis. Both are administered by subcutaneous (SC) injection and cost about $60,000 per year.

Teva’s Cinqair (reslizumab) is an IL-5 inhibitor that competes with GlaxoSmithKline’s Nucala (mepolizumab) in patients with severe eosinophilic asthma. Both are administered by a health care professional every 4 weeks, with Cinqair given as an intravenous (IV) infusion and Nucala given as an SC injection.

Cinqair and Nucala both cost approximately $35,000 per year. On April 5, 2016, the FDA approved Pfizer and Celltrion’s Inflectra (infliximab-dyyb), a biosimilar to Janssen’s Remicade (infliximab). It is the second biosimilar approved by the FDA, following Sandoz’s Zarxio (filgrastim-sndz), which was approved in March 2015. Inflectra was approved for all Remicade-approved indications, except pediatric ulcerative colitis. It can be used to treat patients with rheumatoid arthritis (RA), adult ulcerative colitis, plaque psoriasis, psoriatic arthritis, ankylosing spondylitis, and adult and pediatric Crohn’s disease.

It is possible that Pfizer and Celltrion will launch Inflectra on October 2, 2016, which is 180 days after the FDA approval. This launch would be considered “at risk,” since there is ongoing litigation regarding a Remicade patent that expires in September 2018. It is possible that the FDA will approve biosimilars to Enbrel (etanercept, Amgen), Humira (adalimumab, AbbVie), and Neulasta (pegfilgrastim, Amgen) later this year.

The earliest these would launch is 180 days after approval; however, the launch could be delayed due to patent litigation. Over the next several months, watch for the approval of the first drug to treat primary progressive multiple sclerosis (MS), as well as new cancer therapies and more options to treat RA. More information about selected specialty pipeline medications can be found below. 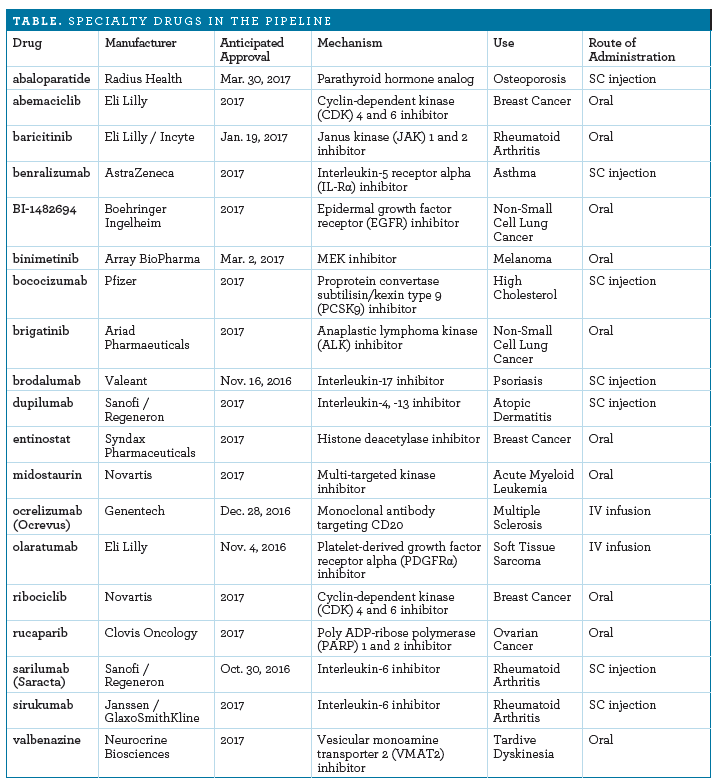 Multiple Sclerosis
Genentech’s Ocrevus (ocrelizumab) is an infused biologic drug that targets CD20-positive B cells for the treatment of relapsing and primary progressive MS. Currently, there are no FDA-approved treatment options for primary progressive MS, which accounts for up to 15% of MS cases. Ocrevus was granted a breakthrough therapy designation for this indication.

Clinical studies in patients with relapsing MS found that Ocrevus reduced annualized relapse rates by 46% compared with Rebif (interferon beta-1a, EMD Serono). In a study of patients with primary progressive MS, Ocrevus reduced the risk of progression of clinical disability by 25%. Ocrevus is given every 6 months by IV infusion. The FDA is expected to approve the treatment by December 28.

Cancer
Several new cancer therapies are nearing approval. Eli Lilly’s olaratumab is a breakthrough therapy expected to be approved by November 4 of this year for use in combination with doxorubicin to treat patients with advanced soft tissue sarcoma (STS) who are not candidates for radiotherapy or surgery. There are approximately 12,000 new cases of STS diagnosed each year in the United States, and there are limited treatment options available.

Olaratumab is a biologic drug that disrupts the platelet-derived growth factor receptor alpha pathway on tumor cells. It is given every other week by IV infusion.

Binimetinib is the first targeted oral therapy in development for this indication. It is taken twice daily, and approval is expected by March 2, 2017. Ariad Pharmaceuticals’ brigatinib is an oral breakthrough therapy in development for the treatment of patients with ALK-positive non–small cell lung cancer (NSCLC) who have progressed on, or are intolerant to, Xalkori (crizotinib, Pfizer).

Approximately 190,000 new cases of NSCLC are diagnosed each year in the United States, with ALK-positive NSCLC representing about 5% of cases. Brigatinib will compete with other ALK inhibitors approved in the second-line setting, including Novartis’ Zykadia (ceritinib) and Genentech’s Alecensa (alectinib).

Approval of brigatinib is expected in the first half of 2017. Clovis Oncology’s rucaparib is an oral breakthrough therapy in development for the treatment of patients with advanced ovarian cancer, with BRCA mutations, who were previously treated with 3 or more lines of chemotherapy.

Approximately 22,000 women are diagnosed with ovarian cancer each year in the United States, with 10% to 15% of cases associated with BRCA mutations. Rucaparib will compete with AstraZeneca’s Lynparza (olaparib), an oral PARP inhibitor approved to treat refractory BRCA-positive ovarian cancer. Approval of rucaparib is expected in the first half of 2017.

Rheumatoid Arthritis
New competitors are expected in the RA market. Eli Lilly and Incyte’s JAK inhibitor baricitinib is a once-daily oral therapy that is expected to be approved by January 19, 2017, for the treatment of moderate to severe RA. Baricitinib will compete with Pfizer’s Xeljanz (tofacitinib), an oral JAK inhibitor taken twice daily, as well as its once-daily formulation, Xeljanz XR.

In a clinical trial, baricitinib demonstrated superior efficacy compared with Humira. Sanofi and Regeneron’s Saracta (sarilumab) is an IL-6 receptor inhibitor that is pending approval for the treatment of RA. It is administered as an SC injection every other week.

A clinical study showed that Saracta improved the signs and symptoms of RA compared with Humira. Saracta will compete with Genentech’s Actemra (tocilizumab), an IV and SC IL-6 inhibitor. The approval of Saracta is expected by October 30 of this year. Janssen and GlaxoSmithKline’s sirukumab is another IL-6 inhibitor that may enter the market in 2017.

Aimee Tharaldson, PharmD, is a senior clinical consultant in the Emerging Therapeutics Department at Express Scripts. She is responsible for monitoring and analyzing the specialty pharmaceutical pipeline. The Emerging Therapeutics Department produces several proprietary reports on the pipeline for use by Express Scripts’ employees and clients. It is also responsible for the safety program that alerts patients, physicians, and clients to important information regarding serious drug safety alerts and market withdrawals. She contributes to Express Scripts’ Drug Trend Report and plays a key role in developing and maintaining Express Scripts’ specialty drug list. She received her doctor of pharmacy degree from the University of Minnesota, College of Pharmacy, and completed a pharmacy practice residency at the Minneapolis VA Medical Center.
20942
Specialty Pipeline Highlights
During the first half of 2016, the FDA approved several new specialty medications.
/publications/health-system-edition/2016/September2016/Specialty-Pipeline-Highlights-