AIDS is a chronic, incurable disease that attacks the body’s ability to defend itself against infection and cancer. Untreated, HIV may progress to AIDS. Management of HIV is, however, now possible. New advancements in pharmacologic therapies and the promotion of safer behaviors aid in the prevention of the disease. HIV no longer means certain death for the affected patient. Pharmacists can assist patients in taking appropriate measures to prolong their lives.

Epidemiology
Currently, more than 1.2 million Americans are living with HIV. According to AIDS.gov, “almost 1 in 8 (12.8%) are unaware of their infection.”3 HIV infection rates have stabilized to an estimated 50,000 new cases every year. Homosexual, bisexual, and other men who have sex with men (MSM) collectively make up the group most affected by HIV.4 MSM represented approximately 63% of all new infections in 2010.4

Although there are disparities among the groups affected by this disease, the overall message is optimistic. New HIV infections are no longer on the rise, proving that prevention methods and community awareness are effective. However, the steady incidence of new HIV infections every year shows that our work is far from finished.

Pathophysiology
There are 2 types of HIV, subtypes 1 and 2. HIV-1 is the predominant form of the virus worldwide, while subtype HIV-2 primarily affects people in West Africa.5 HIV in both subgroups affects the CD4+ lymphocytes, decreasing immunity and increasing the risk of opportunistic infections and cancers.6 Two glycoproteins, glycoprotein 120 and glycoprotein 41, allow HIV attachment to the surface of the CD4+ cell.7 Interactions between the virus and chemokine co-receptors (CCR5 and CXCR4) trigger irreversible conformational changes to the receptors.7 Fusion of the membranes takes place, prompting the viral core to release itself into the CD4+ cell and allow HIV RNA the opportunity to replicate.7

Reverse transcriptase is a unique enzyme HIV uses to create viral DNA from HIV RNA.7 A major reason HIV/AIDS is difficult to treat is that reverse transcription allows for numerous errors, yielding multiple mutations of each DNA strand, thereby promoting resistance.6 Following the creation of HIV DNA, the viral enzyme integrase integrates HIV DNA into the host CD4+ cell’s DNA.7 The viral DNA then continues to replicate. This replication creates more HIV DNA, which can then be transcribed into HIV RNA and translated into HIV proteins.7 HIV virions are cleaved by protease and bud from the cell surface and infect other CD4+ cells.7 Infected CD4+ cells have a significantly shorter half-life than uninfected cells, impeding the body’s ability to fight against infection.6 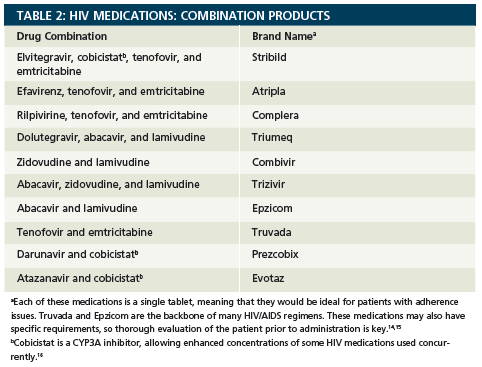 NRTIs act as false nucleosides or nucleotides, causing reverse transcriptase to create defunct HIV DNA strands.8 NNRTIs are similar to NRTIs in their effects on HIV.9 PIs prevent the enzyme protease from cleaving HIV DNA proteins into new HIV virions.10 Integrase inhibitors disrupt the integration of HIV RNA into host-cell DNA.6 Entry inhibitors bind to the CCR5 protein on the CD4+ cell to prevent the HIV from binding.11 Fusion inhibitors also block the entry of HIV into CD4+ cells by inhibiting membrane fusion.12 Further information regarding the medications in each class can be found in Online Table 1 and Table 2.

Conclusion
A pharmacist can improve affected patients’ health care by optimizing pharmacologic therapy tailored to each patient. Tailoring care ensures that patients receive a regimen suited to their daily lives. The optimization of drug therapy will promote patient adherence to their drug regimens, minimize adverse reactions, and decrease drug resistance. Pharmacists can help patients with assistance programs to aid in the purchase of costly medications. The Ryan White HIV/AIDS Program, Medicare, and Medicaid provide patients additional care access.17 Pharmacists play a vital role in the pharmacological management of patients with HIV/AIDS, helping them to live longer, healthier lives.