Despite DEA Accommodation, Many Pharmacies Prohibit Hydrocodone Refills
2014-10-19 04:42:36
Katie Eder, Senior Editor
Although pharmacies can legally dispense remaining refills of prescriptions for rescheduled hydrocodone combination products submitted prior to October 6, 2014, over the next 6 months, many drug chains have chosen not to honor those refills, an investigation undertaken by Pharmacy Times has revealed.

According to representatives from 3 industry organizations, those decisions likely stem from issues with pharmacy quality and safety processes, payer reimbursement policies, and conflicting state laws.

“When the Drug Enforcement Administration (DEA) issued the final rule, it said that these refills, under their regulation, would remain valid until April 8, 2015. That led us to look at what the states are doing, because they have their own regulations for controlled substances,” Kevin N. Nicholson, RPh, JD, vice president of public policy and regulatory affairs for the National Association of Chain Drug Stores (NACDS), told Pharmacy Times in an exclusive interview. “We’ve heard from a number of states that they are following the DEA’s lead, but a lot haven’t said anything. The fact is, there is a lot of unknown and confusion…and we’re still waiting to see how it’s going to play out.” 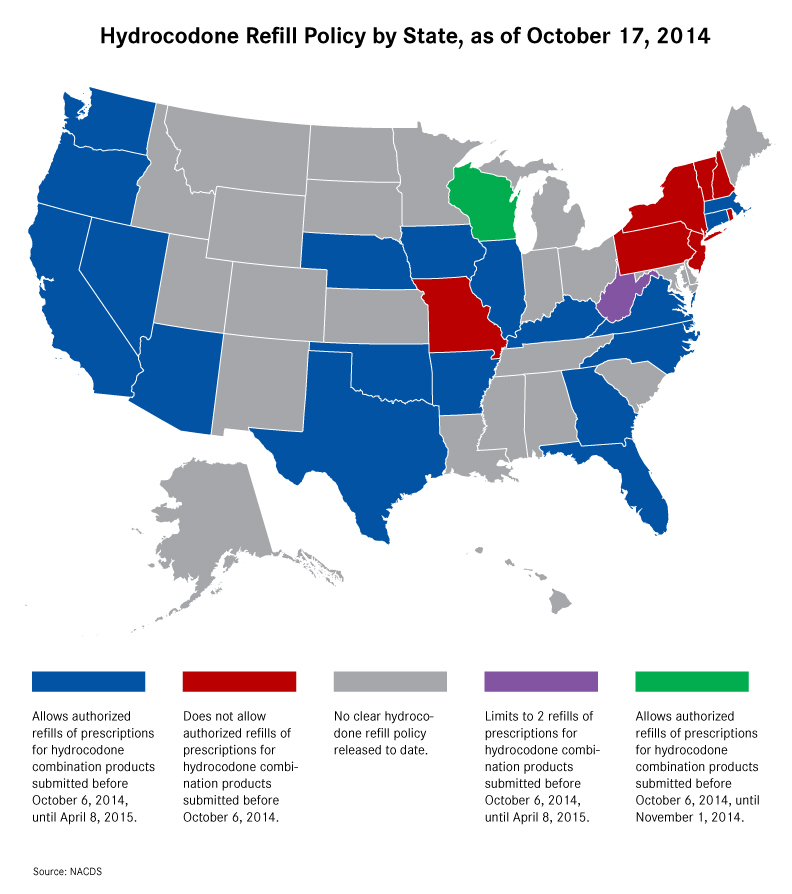 Nevertheless, representatives from Walgreens, CVS Health, ShopRite, and several other chains have disclosed that pharmacists across their stores will not be honoring those refills.

“CVS Health is committed to the safe dispensing of controlled substances, and our pharmacy system does not permit refills for any Schedule II narcotic. As a result, effective October 6, our pharmacies are not…able to dispense refills that may remain on hydrocodone prescriptions written prior to the 6th,” Mike DeAngelis, director of public relations for CVS/pharmacy, told Pharmacy Times in an email.

Still, a recent Pharmacy Times poll revealed 51% of responders are accepting remaining refills for hydrocodone prescriptions submitted before October 6, 2014, although more individuals commented on a related Facebook post that they are not accommodating those refills. Through a company spokesperson, Brad Dayton, RPh, vice president of pharmacy for Ahold USA, said all pharmacies operated by the Ahold companies are honoring refills for hydrocodone combination product prescriptions, unless they are prohibited by state law.

In an exclusive interview with Pharmacy Times, Michael H. Ghobrial, PharmD, JD, associate director of health policy for the American Pharmacists Association, said his organization “would like to see more states to step up to allow the federal accommodation for refills because we would like patients’ pain therapy to be uncompromised.”

“With some pharmacists not being able to accommodate refills, we’re educating our members to deal with their situation and help patients get the adequate pain medications they need,” Dr. Ghobrial noted. “The law is the law and the circumstance is the circumstance, but pharmacists need to keep the focus on helping the patient.”

To maintain that focus, the National Community Pharmacists Association (NCPA) created a “Dear Patient” letter for pharmacists to distribute to patients who may have existing refills for hydrocodone combination products in order to help prepare them for the regulatory changes, NCPA vice president of public affairs Kevin Schweers told Pharmacy Times in an email.

“In addressing potential issues with refills, NCPA advised that, while patients could have valid refills remaining on an active hydrocodone prescription, pharmacists may not be able to fill these prescriptions due to multiple factors related to state law and insurance-related issues, which may prevent the pharmacy from honoring the refill,” Schweers said. “Therefore, it was recommended that patients contact their doctors to obtain a new prescription.”

12661
Despite DEA Accommodation, Many Pharmacies Prohibit Hydrocodone Refills
Although pharmacies can legally dispense remaining refills of prescriptions for rescheduled hydrocodone combination products submitted prior to October 6, 2014, over the next 6 months, many drug chains have chosen not to honor those refills.
/news/Despite-DEA-Accommodation-Many-Pharmacies-Prohibit-Hydrocodone-Refills